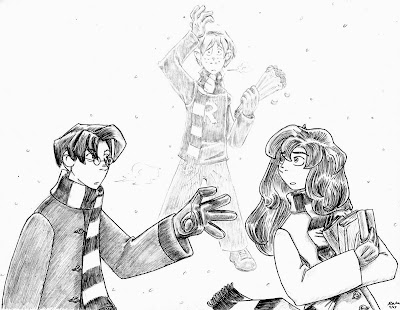 This is a drawing I did after a request from one of my Spanish classmates. She originally asked for a Final Fantasy shot, but after considering that it was pretty late in the year and a Final Fantasy picture would probably take a while, I asked for a second option. She loves Harry Potter and shipping, so I drew this for her.

I couldn't tell if she liked it or not, but I know I put considerable effort into both researching the picture as well as drawing it of course--I was up till about 7 in the morning hammering this out on (what I thought was) the last day of class and my last chance to give her the picture. Turns out there was a whole weekend and a day before the last class.

Anyway, I'm reasonably happy with how this went and I think she at least enjoyed the sketches I showed her before arriving at this final version.

Big thanks to Cartel's Chroma album; I listened to it over and over, fueling me into the night/morning.