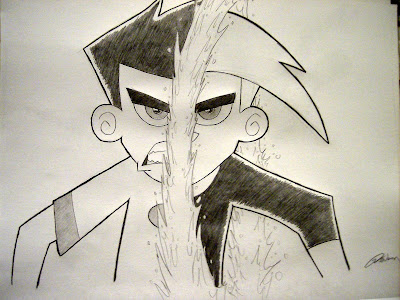 Summer school at Washington ended, but I was eager to find more work, so I signed on to tutor/mentor during the school's Midway Mathematics Academy, which was where we try to trick kids into thinking math applies to the real world, and end in a field trip to the USS Midway in San Diego.

So here's a picture I drew for a kid who likes Danny Phantom, although I think he was afraid to admit it in front of me. I don't know why, I mean, they all know I'm into Pokemon...In any case, a google search got me interested in the character, so I kind of drew it for myself, too.

Up next is a picture of everyone's favorite (really--every kid I've met is a fan), Spider-Man. I wanted to try something interesting with the web, so I tried to mimic Humberto Ramos's web design. Pun intended, naturally. 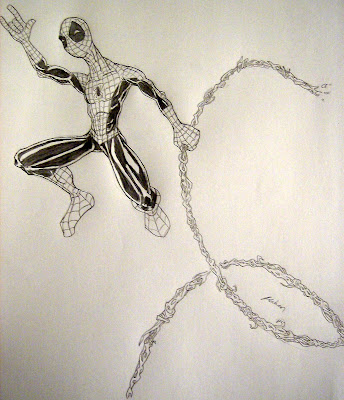 Sadly, I wasn't able to give away any of the art due to a perfect storm of circumstances, but I wanted to post something this month, because I hate it when the artblogs I visit take forever to update.

Also, I'm back at Yale, so I'll be able to post scans from now on, and even update more than monthly. I'm excited about the previous sentence in its entirety. Also, I'm going to take advantage of Camp Yale's lack of classes to do a batch of scans, including my non-Yale comic'ing debut.