This is one of my final Record pieces for the year, for an article about Turduckens--the Thanksgiving food that is a duck stuffed into a chicken, stuffed into a turkey. The author writes about the prehistoric ancestors of this fabled combo creature, and so here's the art I created for that article.

Easter Eggs: Some names appear hidden in the trees beneath the volcano (left to right: Tom, Phil, Jordan, Reux).

Visual Cues: My imagined turducken has, instead of some freaky, over-stuffed gut, the signature anatomical features of each bird--chicken mohawk, turkey cheek droopies, slick-back duck tails (a-woo-ooh), and duck feet.

With any luck, this'll make it into the upcoming Food Issue of the Yale Record! (UPDATE: No such luck!)

Email ThisBlogThis!Share to TwitterShare to FacebookShare to Pinterest
Tags: Record 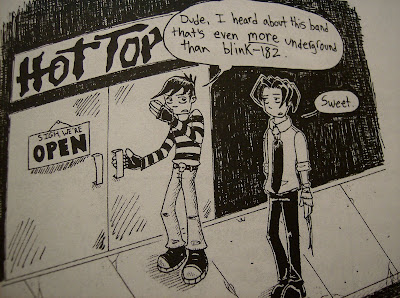 We're about to hand in the art for the last issue of the Record for the year, so I can comfortably say this is my favorite piece I did this year. I remember jumping for this assignment when I read the art description--emo kids talking rock.

This piece was satisfying for a couple of reasons--it played on my favorite brand of music (not the band, though), and the people who listen to it. Plus everything in the shot but the big chunk of dialogue was pretty much my idea, but even with that chatter, I had taken the liberty of whittling down a huge, clunky block of text to what you see there. I added "sweet" as a kicker. I've received positive feedback over choosing to place these guys before a Hot Topic.

Easter Egg: "Yale" is written between the two in the pavement cracks.

The costumes have a fun little story behind them. The guy on the bottom is wearing Deadboy's costume, a character I created senior year of high school. His very own comic didn't launch, but I've still got the story and a rewrite floating around in the file I keep for everything related to him.

As for the other guy, who's opening the door, I modeled his costume save the gloves after Loide's "Carpe Diem" title character. I had just read Jambalaya Fall '06, and that story made me instantly want to join the Yale Comics Club. So it's cool how everything worked out.

After recently looking at my horrible, very first submission for the Record, I realize how far I've come since. And I look forward to more good times with the Record next year, including easing into my new role as "Aspiring" Art Director, as the current boss guides me into the role. 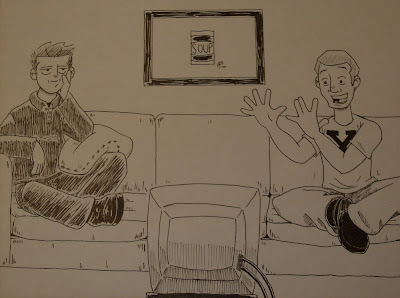 Hello and welcome to my sketchblog!

To start, here's a picture I drew after being forced to watch the 24 season premiere, which wasn't as exciting as I was led to believe. It's cut off a bit since I captured it with my camera and not a scanner, but I'll update it whenever I scan the picture.

I hope to post more art I did/am doing/will do for the Record, Herald, and anything else, in addition to any random stuff like the above.