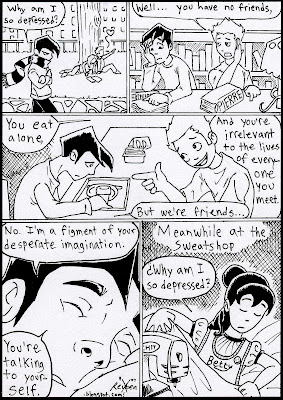 This week's comic is about a personal philosophy: it doesn't matter how bad you've got it, you have no right to complain when there are people out there that are really, truly suffering.

My "bad days" mean nothing, especially here at Yale; I have it great, others do not. They have a right to complain. It would be selfish and insulting to try to whine about life's little annoyances when God's been so good to me.

Fun facts: First time including females in a "Lighter Light" comic plus seated poses from a pose sheet by Mel Milton. 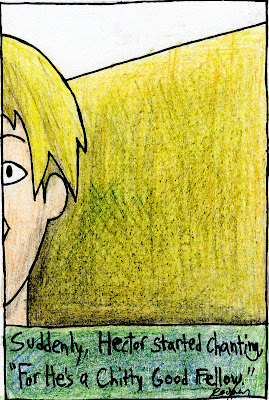 This is for my "boss" (the helpful one), who is celebrating a birthday tomorrow.

Easter eggs: inside jokes here and there (composition's like a spooky picture of him, art style mimics his, coloring relfects his love of color, text contains a name he often uses in his comics as well as his own nickname).

Fun fact: I actually have a list of names of people that I want surprise with art due to birthdays or other events. So I'll get to them all eventually. I hope.

Also, I'll likely happily draw $omething for someone I don't know I guess; I'm very lonely so I don't have much reason not to. 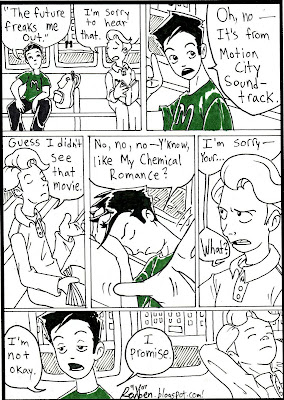 It's Herald: Week III. I haven't yet seen the printed Herald this week, but I have a strong hunch the printing is going to be terrible (UPDATE: it is). I'm hoping for the best (UPDATE: don't be stupid).

Well, I wanted to do a non fanatical comic about My Chemical Romance, but after getting transfixed on Motion City Soundtrack thanks to an old Northern California chum's enthusiasm, plus an actual conversation involving panel 3, I went with this idea.

"Fun" Facts: Some expressions from Johanne "Rufftoon" Matte's "Sokka Sheet." I watched/listened to "Zaboomafoo," "Wishbone," and "The Simpsons" while inking this in the Swing Space TV room. This is our first color comic and although I don't like coloring, it was actually pretty fun, so thanks to Loide's markers. 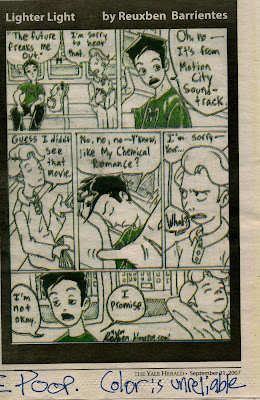 UPDATE: Here's the printed version of the comic--it's not as easy to see here, but trust me, the thing is blurry as heck and pixelated.

Note the Herald Editor-in-Chief told me, "Yeah, it'll probably be just fine, ok *dashes off*," after I showed her a noticeably pixelated proof in the office.

Being Comics Editor isn't as pleasant as I thought it would be.

"If this is the coronation, I ain't feelin' the love." --Gerard Way 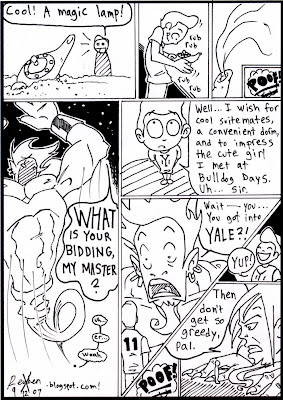 This is my very second Herald piece of the year. I tried coloring it with photoshop (since we're being pressured into moving into color now), but my ineptitude combined with my hatred of Macs ended disasterously.

A couple of things on this comic: I think I might have been influenced to do this because in my Lit class (Intro to Narrative), we were reading the Arabian Nights. I found it really interesting, and I wish I could try drawing out some of the stories some day. It really gets the imagination going.

Easter eggs: the Genie's flashy pose was inspired by a Hulk picture I saw at Cheeks'. Also, the genie's surprised expression was inspired by an expression sheet Rufftoon (Johane Matte) made of Sokka from Avatar, my current desktop wallpaper. A final fun fact: I wanted to try something different with frames, so that's why it's so weird. I hope it was readable.

I think this'll be the last of the 2011/freshman-oriented comics for a while. I still have a desire to do my freshman-centric comic strip series, but ever since I got the boot from my old suite, I really have hit a motivational impasse. Morale's everything, and I haven't got it right now.

Well, thanks for visiting, 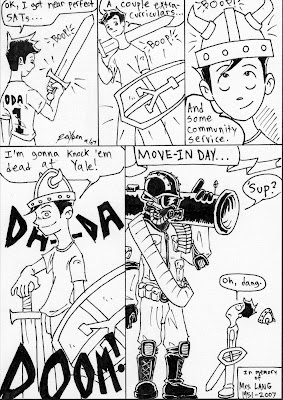 And thus begins my Yale publication year! As would be expected, first up is a Herald piece. This comic is meant to kind of explore a prefrosh's mindset before coming to Yale: what seems to be the consensus is that many of us think we're pretty good, that we'll put up a good fight once we get here, but once you land on Old Campus and realize just how big the world is and just how insanely brilliant everyone around you is, you start to feel just a bit scared and insignificant.

As usual, we have an easter egg. First is "ODA 1" on the guy's shirt, referencing Eiichiro Oda, creator of One (1) Piece. I wanted to homage him with his playful use of sound effects in backgrounds, so I have DA---DA DOOM! wrapping our hero posing like a tough guy (I always think of the main character as the "Hero" in my mind).

The last panel (well, all the panels) would have been more complex, with a background of Old Campus and a more elaborate banner, had I had enough time, but apparently everyone was scrambling to finish this week's issue on time--the big cheeses were up till 7am!

The second, not-so-covert easter egg is actually a dedication to my old physics teacher who passed away this past summer. She was a great, kind person, and I wanted to at least have her name out there for people to read. I'm taking physics this semester to honor her memory. 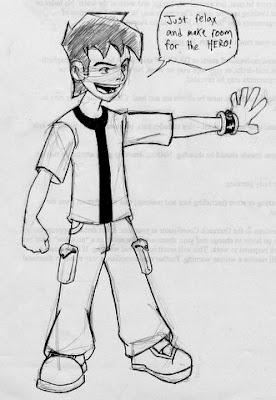 EDIT: I'm still trying to figure out how to get these pictures to show up correctly, so hopefully this time it works! Keep in mind I'm not very good with computers.

This is my first time posting from a Yale cluster--so hopefully I don't have to be in my room to post anymore, if I can get this all to work. So what I've got for today is a bunch of drawings I did while on the job this past summer at WMS's GEAR UP program. Up first is a sketch (from memory!) based on my second favorite cartoon currently on air, Ben10. I drew it during a training session for GEAR UP tutors (it was all common sense stuff anyway). When I checked for an actual image of Ben later, I realized I was pretty off with the hair and Omnitrix, but I'm still happy with the sketch.

Here's something I drew during one of my 30 minute breaks. I was working on an elaborate door decoration for my boss at the time, which made me want to just draw random stuff, so I thought I would try to capture an emotion. I was going for cocky, play-by-my-own-rules. I hope that came across. Lame(r) stuff trimmed for your convenience. 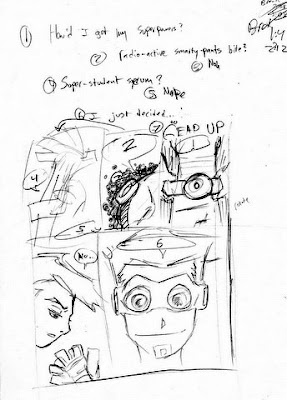 And oddly enough--I got a taste of being a pro artist while at GEAR UP because my other boss asked me to design our super hero mascot. Since I just drew all day and collected pay, I was in-effect drawing for money, which is what pro artists do! Anyway, after I churned out a pin-up, I asked if I could give him some context, and roughed out a short, substance-less comic to feature him. 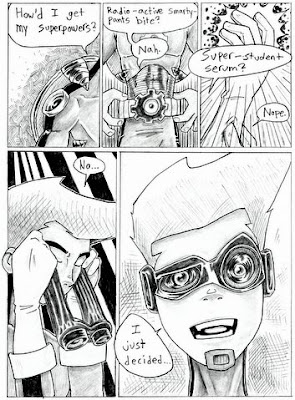 So after the rough outline is the finished first page. I thought it would be cool if you could read into it a little--he's literally getting his gear on, but he's talking about his "super [academic] powers." Also, I wanted to homage Ben10, which I love, so the glove panel's background is the bubbly background we always see after Ben poses post-morph. There's also a minigame to guess what super-hero origins he's referencing. 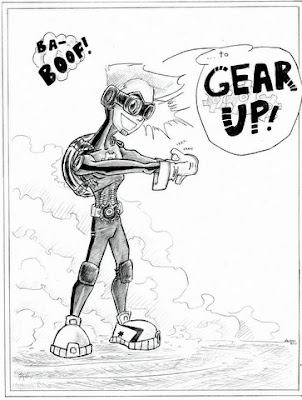 And right beneath the second GEAR UP Man entry is our exciting conclusion page. I actually drew the hero first, got the design approved, drew the first page, then gave the figure a background. The cheesy dialogs and (everything else) was all me. It was all just a ploy to get him to say "GEAR UP!" I thought the drawings would just be an office decoration, but they were thinking about printing up some copies to post around campus. They didn't print anything out before I left because the printer was broken, so who knows what'll happen. 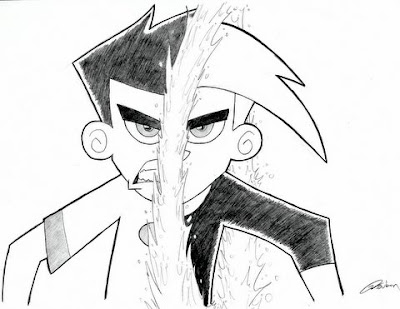 As a bonus for today's post, here's a scan of the previous post's Danny Phantom picture. Just so you know, there was some gunk on the scanner, which is where the weird, black smudges come from.

Ok! What a post. Look forward to nothing but scans from now on! And the first Record meeting is tomorrow night, with Herald in tow, so be prepared for actual Yale art soon!