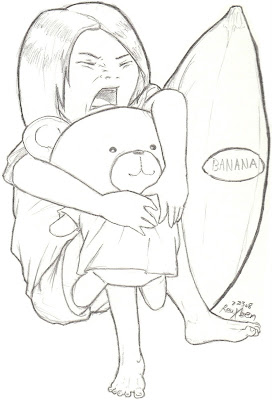 This is an old sketch from Japan. Also, I'm also entering a Back to School Story Contest with a story that's just plain--wait for it--bananas. So here we go:

Someone offered to store a box of my clothes and stuff over the summer at his place in Connecticut while I was back in California/Japan. This was a terribly fortunate free storage offer because I've accumulated quite some extra stuff at school after OCD'ly over-packing almost every time I fly back to Yale from California. So he covered what my residential college's free storage wouldn't and everything was going to work out perfectly when I return to school in the fall.

I arrived really early on move-in day and was ready to get all unpacked and have tons of free time to roam Yale and draw before school responsibilities officially started up. So I get my box from the guy, bring it up to my room, and unpack only to discover a box full of orangey-green fuzz. I don't know where he stored my stuff over the summer, but wherever it was, it leaked mold right into my stuff.

So rather having a relaxing move-in day, I spent the rest of the day walking between my third floor room, the basement laundry room, and the Walgreen's down the street--to buy bottles of disinfectant and laundry supplies--as well as filling the time with hardcore scrubbing and cleaning and hoping the laundry machines would actually do their jobs for once. I salvaged most of the stuff, but my pillow and blanket now have these weird black spots all over them that refuse to wash out, and my heavy winter jacket reeks whenever it isn't in subzero winteriness.

So...sincere thanks for the storage assistance, but it did end up ruining some of my stuff, and killing my super relaxing move-in day plans.