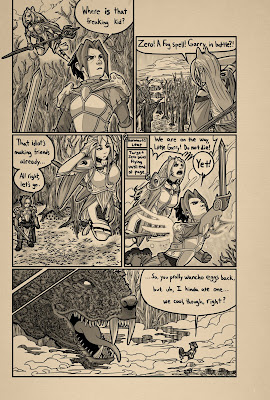 Easter Eggs: "Yale" in panel 3, Deal 4 in panel 1. Today's main spell doesn't really exist in white, but enough white creatures and spells grant temporary flying, also known as "leap," for it to feel safely white, even if a lot of them require some blue mana involvement. The other spell, "Fog," which has some incredible art in M12, is used to prevent combat damage, which Garry obviously used to keep from getting slaughtered by this egg-laying mammal. The creature in the last panel is roughly based on Krosan Beast, which is basically just a squirrel jacked on theshroids. 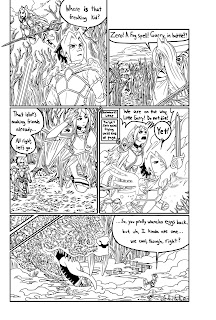 Fun Facts: Zero is granted flying in the fourth panel by Nyao's Aeronaut's Leap spell, which again, doesn't quite exist purely as is in Magic, but it's based on the common "leap" ability of many white tricks, particularly the keenly named Kor Aeronaut.

Of course Aeronaut's Leap wouldn't be a particularly playable card in draft or constructed, but it serves the plot, and in any case you'd think any decent "real-world" white mage could easily whip out a leap-spell without even blinking, so I regret nothing. Nothing.

Also, I just learned that you can die from eating raw eggs...but let's just go with people in this Magic-based universe are generally tougher than in our world. That's fair, right? Sure it is. 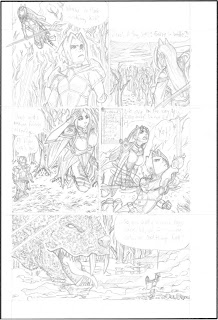 Baa: I actually find Flying to be a bit of an annoying mechanic. On the other hand, I've always had a fondness for fear (now more appropriately retired for "intimdate") because it felt sneakier than Flying while still being fair in the sense that if they had artifacts or the correctly colored creatures, you were sunk, but otherwise it was pretty smooth sailing. I won my very first tournament I entered by drafting two or three Nezumi Cutthroats and just going to town on my opponent.

But in reality, only black mages can really appreciate the good old days of fear, I guess.