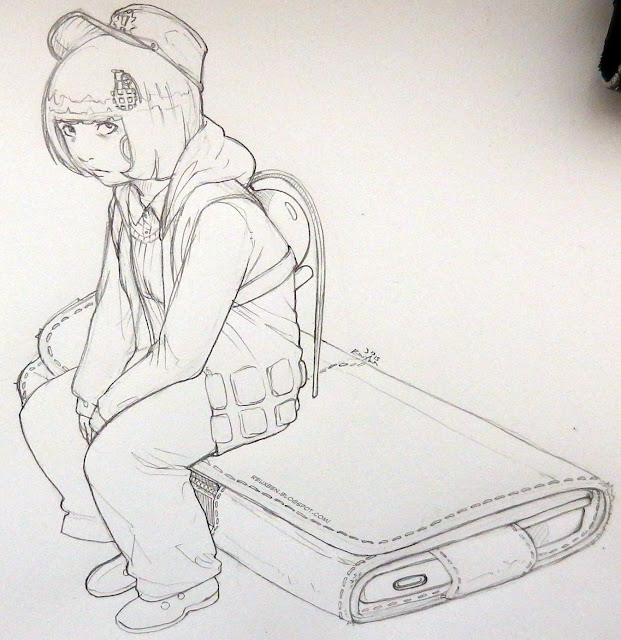 Spotted the pencils to that one piece from eternity ago, boom.

The dark thing in the upper right is my lovely cell-phone-case model. 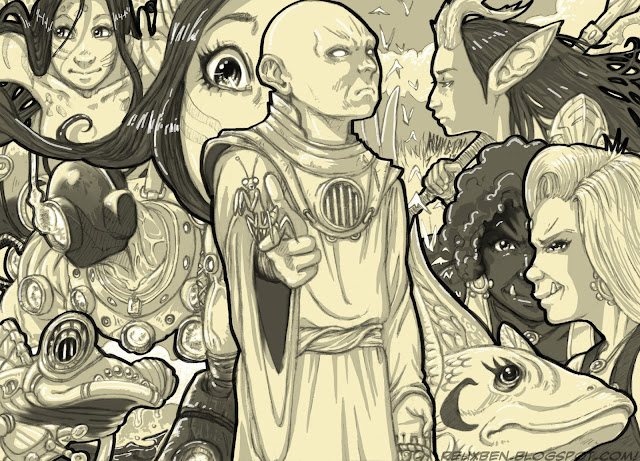 An intro to pauper for Hareruya, with Pencils and tones, too.

Fun Facts: The deadline was just a few hours so had to skip inks, unfortunately.

Easter Eggs: Let's see if I can remember them all-- 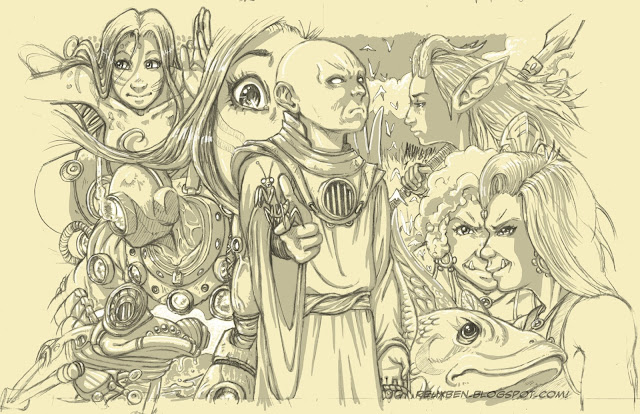 Introducing Japan to Pauper with this illustration, had to forego inks for the deadline, so jumped straight to tones after pencils. 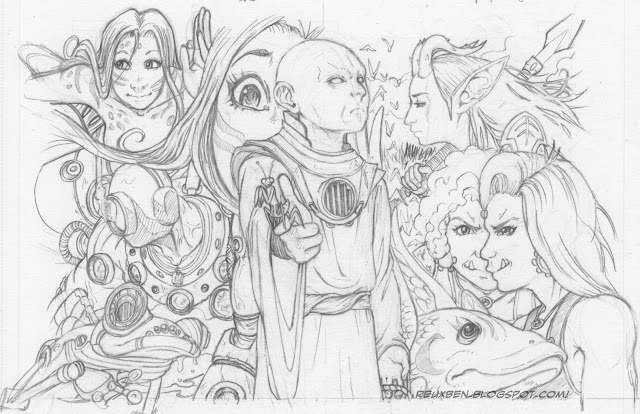 Did an illustration for Hareruya about Pauper back when the format was launching in Japan.

These are the pencils. 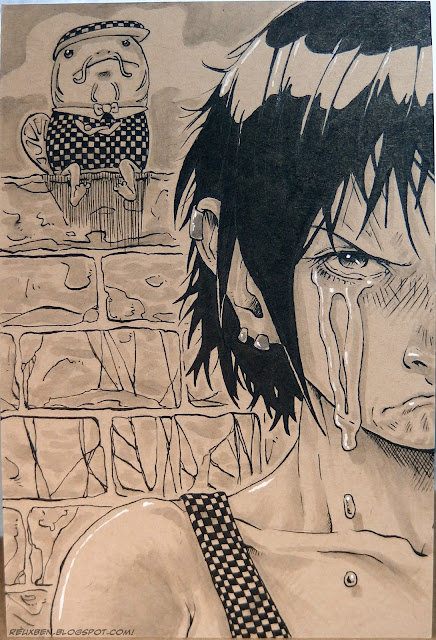 A concept I did for Inktober 15, of a tadpole trainer with a tough fighter girl as his ace trainee.

He's able to push her just far enough so he can unleash her power herself, but there's always an underlying love there, as opposed to manipulation. For instance, he calls everyone "son," but he knows that comparing her in any way to males enrages her. 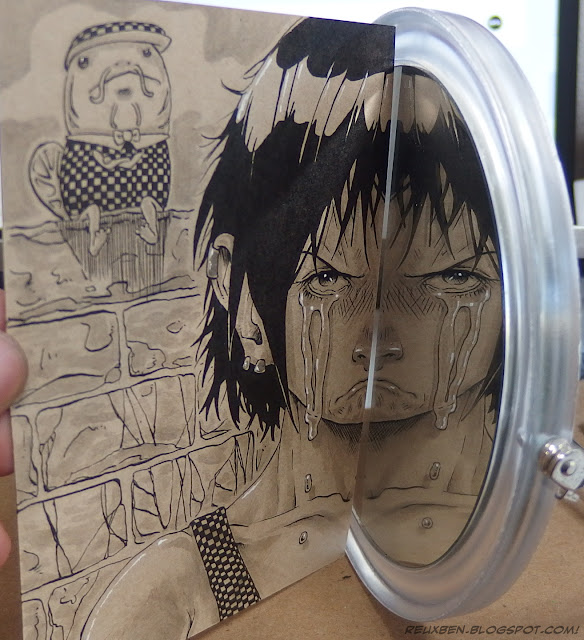 Fun channeling the emotions here, not unlike the old boxer piece from earlier.

Also made a GIF of this. 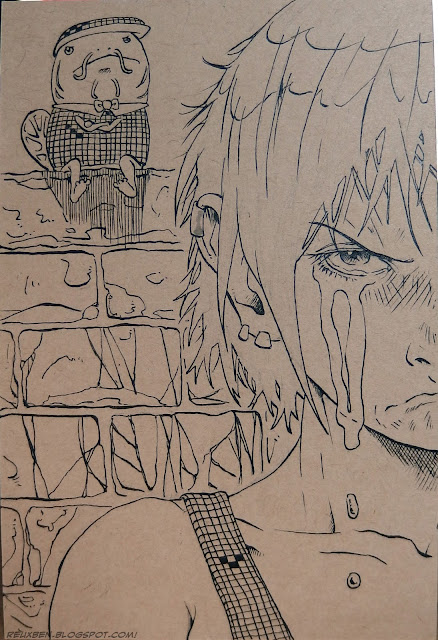 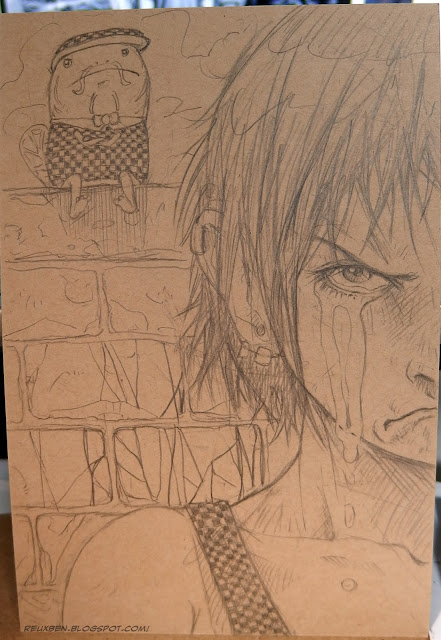 Get up and fight. 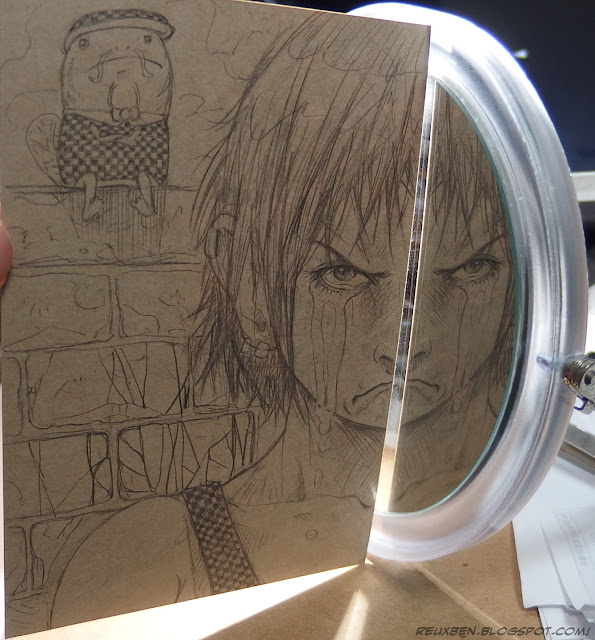 I know, girl. You a tadpole? 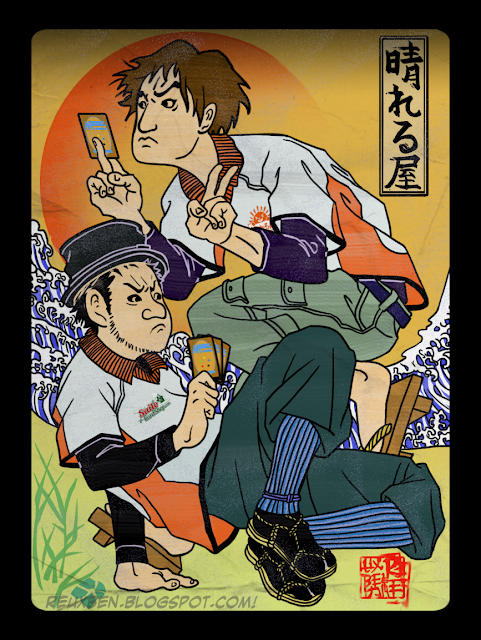 One of my earlier assignments was for a Hareruya player card set. I mighta gotten pigeonholed by the ukiyoe style in this... 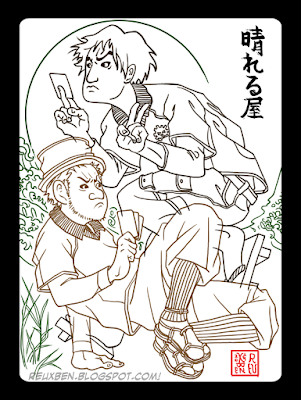 Again, studied a bunch of ukiyoe pieces for this, especially for the outrageous posing and hands. Kenji is famous for the peace-sign thing, and Saito for hats, so I wanted to include those. I had to include their uniforms, but other than that, could do whatever, so I tried to give them old-fashioned vibes otherwise, particularly on the footwear, which was quite fun. I saw facial hair rendered as grey-blue in my research, but it looked really bad in this modern interpretation, so we painted it black.

The Great Wave off Kanagawa riff is probably played out by now, but it felt kinda expected, if I'm doing a this style. The subtler element I'm probably more proud of is the sun, which I wanted to be prominent since that's the shop's mascot. And then the little hanko red-ink stamp I designed went through a couple iterations; I wanted it to be generally illegible, since I don't like screaming my name on stuff--just dumping the url on my posted work irks me, so I try to minimize even that. 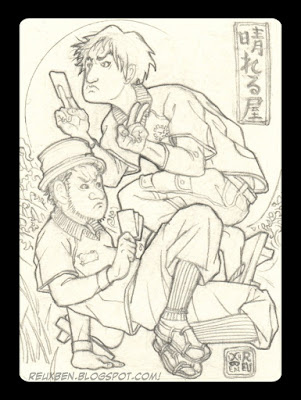 Fun things that came from this were first, actually seeing these guys reenact the pose, and then later, giving Christian Calcano a good chortle with these when he randomly stopped by Hareruya some time around a GP. No, I don't whip out work whenever I meet people, but he asked to play Magic with me and tokens just tend to come up as you play and talk. He was playing Abzan and I was playing mono-stupid-rookie-mistakes.

I've played a few pros by now, and he's the only one that didn't sorta command an intimidating presence--it didn't feel like he was a "murderer," as I call them: he really puts you at ease when you play, despite painting bricks with your face. Only other guy like that is probably Saito himself. You're like haha, guess I had no chance after all! Other pros I can think of, it's more like you're there but not really in the game. One guy though...misery...

Anyway, as far as I know this was a pretty limited printing, though whomever did get to see it enjoyed it, but the only way to get these was via a random lottery pack thing, where you buy a random, custom-made, all-rare pack that may also include a tag redeemable for these or other fabulous prizes. 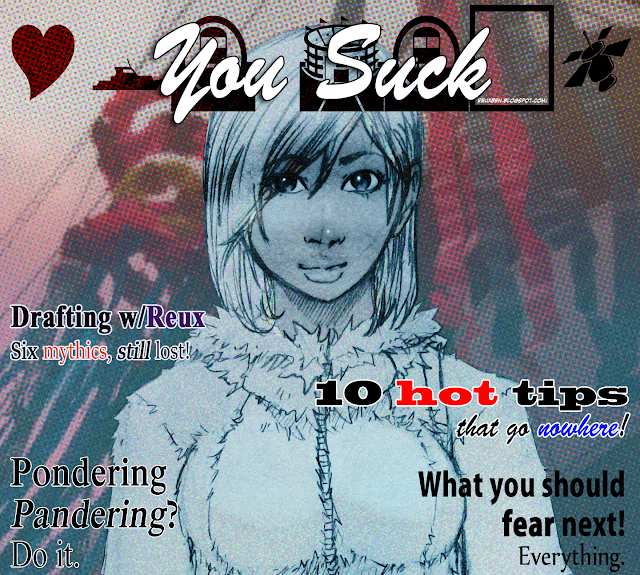 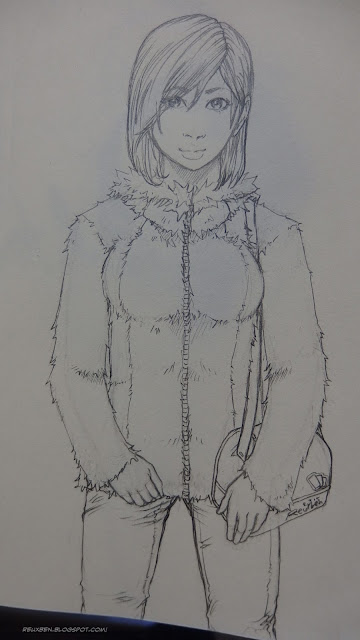 I wanted to draw this fuzzy jacket I saw, in the continuing effort to discover the gamer girl design. 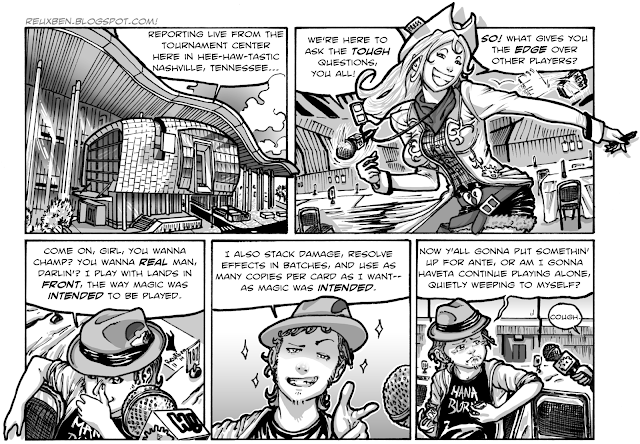 Our eighth or seventh, but definitely finalth Fear. It's a callback to that first one that's actually our second one, but actually our fourth one. 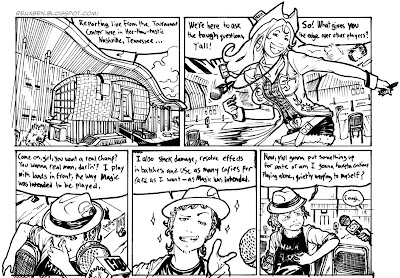 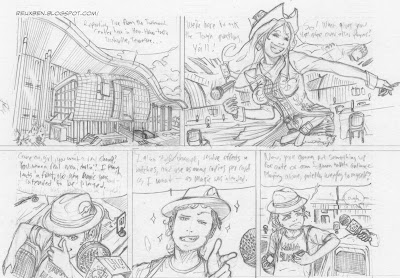 Easter Eggs: This is the actual GP Nash venue both exterior and interior, the outfit is a Cowboy Bebop riff but with a little sun in it and a little Island heart, the Pokemon hat is from a then-recently banned player who used to wear a Pokemon beanie, and then Mana Burn is the name of a popular Magic magazine here in Japan. 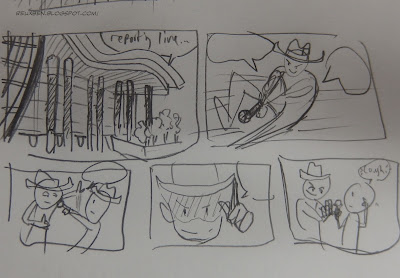 Well, that was that. The concept of tiny vs giant, uncertain threats, stuff like that is intriguing.

He's there to kill her, but then realizes a weapon alone doesn't make a threat when you're/it's that small. He is trying to be a good assassin, but is just not suited for it. They become allies, and instead of trying to kill her, he starts just trying to annoy her at worse, but mainly just endeavors to help her however he can since she's his Mooncap now (a faerie assassin guild command rank). She doesn't care about the little pesterings because she likes his company and learning about the faerie world that rejected such a well-meaning fellow. But when it comes to past debts and obligations, distraction alone doesn't make an alibi when you're/it's that small... 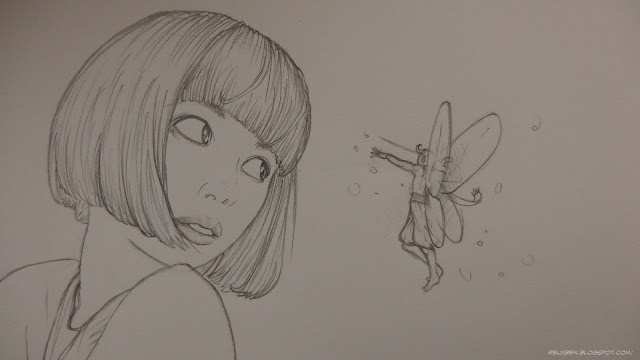 Sketching from a photo and imaginationz.