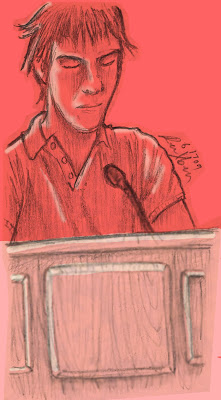 25 year old writer Nick McDonell came to speak to us in LC today, so I sketched him in my Moleskine while he read some selections.

McDonell, Harvard '06, knew Mark Zuckerberg's roommate. He told a couple quick stories about the Facebook creator, one of which was pretty interesting: Zuckerberg didn't draw and didn't know any designers, so he didn't know what to do about a logo for the new social networking site he was working on.

His pal introduced him to somebody who could draw and the artist sketched up a quick 3/4 profile of Zuckerberg and was promised something like a little over 1% of whatever the site would make. The artist agreed and the logo was greenlit. For that quick sketch of a logo, that artist reaped many, many millions, which is still only a little over one percent.

I've got two words for that artist: Oink oink. 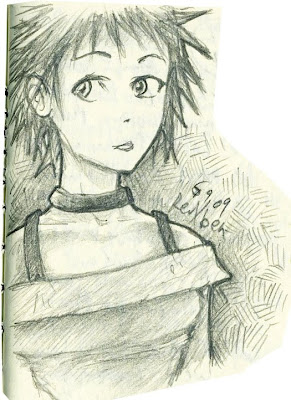 So that story got me all fired up because I'm working on a couple of things for a couple of people here at Yale, so even if I don't make millions, at least I might play a part in history.

Anyway, here's another Moleskine sketch, this one was from some Summer Session meeting I believe.