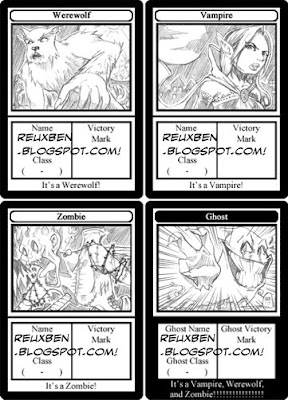 Here're the final four monster cards from the set I made for the jKids. Thanks again to Endling for the processing tips (yay no inks!) and Magic for the layout inspiration.

The kids all seemed to really enjoy my game, beyond just the cards. The only problems that arose were that my mega prizes for those who had both a Victory monster and a Victory mark got nixed, and the max non-mega prize payout was capped to two candies instead of three (I planned one for each of participation, Victory mark, and Victory creature).

I hope the jKids don't think I tried to short them! But then again, two is better than zero, particularly when jAdults act as if you're trying to give kids puffs of stuff rather than candy any kid would eat on their own time, anyway.

Speaking of limited participation, I only ran this game with my main school, but I did have a few extra sitting around and gave some to a couple of jKids at my secondary site who came by to talk Duel Masters, and they were thrilled just to get these random little cards of which they had no idea about--unfortunately the second crew didn't get to play the game. Maybe next year? Hopefully next year.

Here are some close ups on our guys. I drew this set after completing the first because I thought it would be cool to have some variety--originally I was going to do a boy and girl version of each monster, but then thought it'd just work best if that were only for vampires and just made two versions period.

Really cool to see their reactions to the super-rare ghost! They even did his little ghost peace sign to each other haha! The female vampire, by the way, is inspired by the Innistradian ones from Magic, just so you know. But I think my favorite of all is this set's zombie or werewolf. See if you can spot an Easter Egg in one of these guys.

Speaking of covert drawing, I drew these mostly during the downtime of judging this English tournamenty thing.

Pro tip: don't take the tournament stuff too seriously, English judges; no need to be jerks to the jKids. 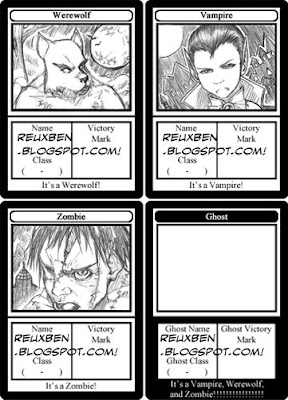 I made these little Magic-inspired monster cards for a school-wide event, the first major, original initiative of my little career, culminating in a candy give-away on October thirty-oneth to any student who doesn't lose their fragile, microscopic monster card and remembers to bring it to me at the appointed time. The give-away part's actually a huge deal since jSchools are usually quite strict about their no-candy policies, even if the prize is a tiny choco droplet the size of a marble.

So the idea is that we do class just like normal all week, but I give each stud a card randomly, including a super secret monster, and the cards only come into play as the aftermath of the activity (although when kids learned of the stakes, they got freakishly focused on excelling during the day's activity). The students who win a given class's activity (or just achieve notably impressive work/effort) get a victory mark--my sig--and the first student in a class to win a victory mark captures that class for their school-wide monster team (their card's monster). At the end of the school week, I tabulate the captured classes to determine the victory monster and that monster's cardholders get a bonus candy (bigger than the standard marble-sized choco-drop, like a mini-Meiji bar or two-stick Kit-Kat pack, etc.) when they present their card to me. Students who have a victory mark get a bonus candy, too. But if you have a victory mark AND a victory creature, you get a mega bonus--i.e. a full-size Snickers bar, Ghana bar, Pocky pack, etc.

I modeled the cards after Magic: the Gathering frames and I drew their illos at what I thought was print size. I penciled these during my down time at a volunteer gig I went to, and I thought I'd ink these after getting home, but then I remembered my newly-learned, time/ink-saving Endling inkless inking technique and decided to put that to idea to the test in this print-heavy project.

These came out really nice in print--they are quite small (about half the size of their originals' size), but the art reads great. And I think the "Oolf" was their favorite, although zombies got people pumped, too.

To spice it up, I decided to draw two versions of each main monster, but only one of our secret rare, since only a few students would ever grab one--so cool to see them flip out about popping the rare--or even just seeing one!

If you can't get enough food lately, we've got a giant treat for you today. What is it? Here's a hint: 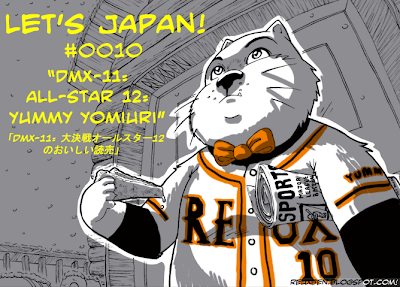 No, it's not some kinda basebally thing--I'm an A's fan, anyway (see if you can spot the Oaklander in the final capture below, below the Shield-Trigger eyes, that is...) 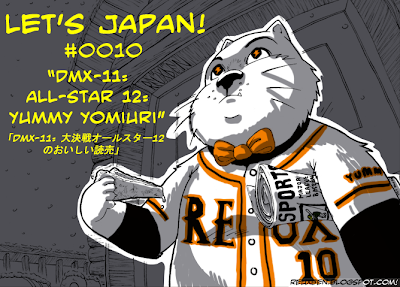 See, the giants in this 大決戦オールスター12 set are usually food-themed. So.

It all makes sense. 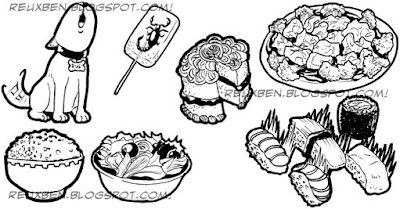 Here's the third and final course of what old man Sanji's been a-cooking.

These are foods I never eat, minus sushi and rice, which I kinda have to since it's Japan, ya know? 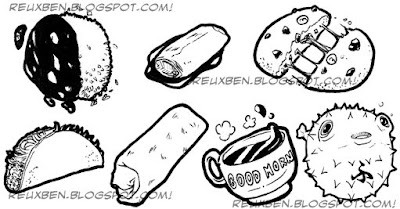 Here's the second serving of what Sanji's been cooking.
These are the foods I sometimes eat or never eat in the case of fugu. 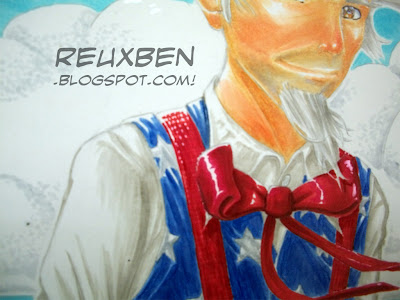 Here's select slides from a true/false presentation I gave on school rules JP vs US. After giving the rule, I'd have them vote on whether it's true or false in Japan and then in the US. It was funny when they disagreed on what the rules were in Japan, as some seem to think certain rules aren't, thus tacitly admitting to breaking them! Oh dear.

But after tabulating US votes, we hit one of these slides for O true or X false. These were some of my favorites of the slides.

Also The Ring, copyright of its original owner, is not scary. Enough already. Fun Fact: when I first visited Japan, I got to tour Toho Studios, where The Ring (US) was actually shot! 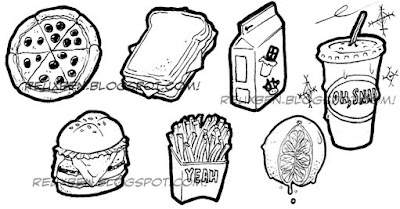 Here's the first serving of what Sanji's been cooking. So much food...These are the foods I do eat. 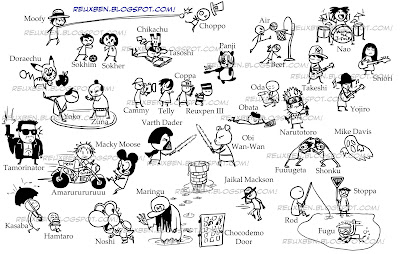 This was an army of characters I drew for a worksheet about present progressive. The jKids have a sheet of these characters but half the names are missing so they have to look around the page for a character whose name they want to know and ask their partner, who has every name the OG lacks and lacks every name the OG has.  Thus the partners must interview each other using the present progressive to describe the character whose name they want to know.

Many Easter Eggs, including but not limited to TV Reporter, RADWIMPS, Base Ball Bear's female bass player, Maximum the Hormone, the horrifically over-rated Ring, and Kaburagi. Oh, and Where's Waldo, which is called "Where's Wally" in Japan.  So pumped to get some jLaughs since even though the deadline was super tight, I took time to make the names and chars inside-jokey to the jKids!  The best part is when they excitedly chatter about getting a joke before everyone else then they break it to their neighbors and then they all enjoy it together.  So neat! Anyway. 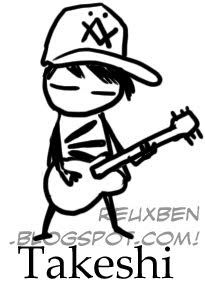 This was the one doodle I was most happy with.  It came out of nowhere, but I loved how he turned out.

I'm not really into The Hiatus as much as Ellegarden (Hosomi's previous band which went on indef. hiatus in 2008, just as I became a fan of them soon after landing in Japan for my first visit here).

But I am definitely rooting for Takeshi Hosomi's success. And check out how fluent he is!! 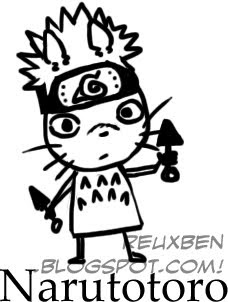 This was also a neat one.

It's a splice of Naruto and Totoro.

In conclusion, I wish my Yojiro Noda woulda came out better.

Why is it that the ones you really want are always just beyond your fingertips? 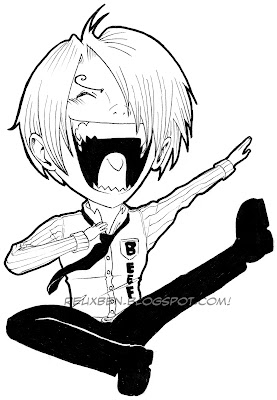 I feel like I make the G-Unit pun a lot. It's gotten to the point that I almost can't even remember where it comes from anymore.

All I remember is just that a lottttta white kids used to say it in middle school. But they'd stutter it, like, G-g-g-g-g-g-GEE-unIT. Soft g.

None of that has to do with the purpose of this piece.

Which was for a worksheet I made about food.