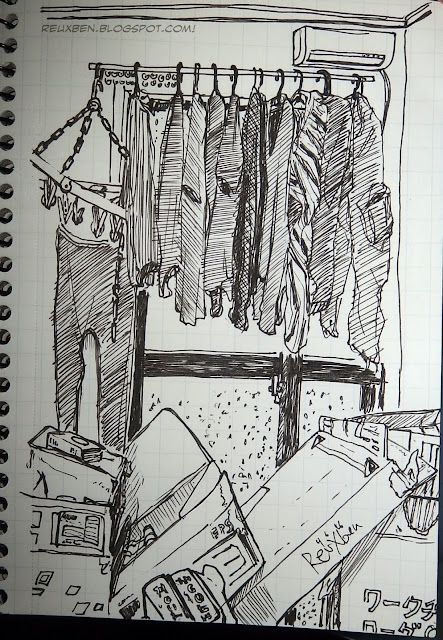 Trying out a little drill from Jake Wyatt.

It's raining today, so I'm happy.

But I have to leave the house, so I'm sad.

Life is about balance.

At least that's what the Cliff's Notes say.

And sometimes I just want to skip to the end. 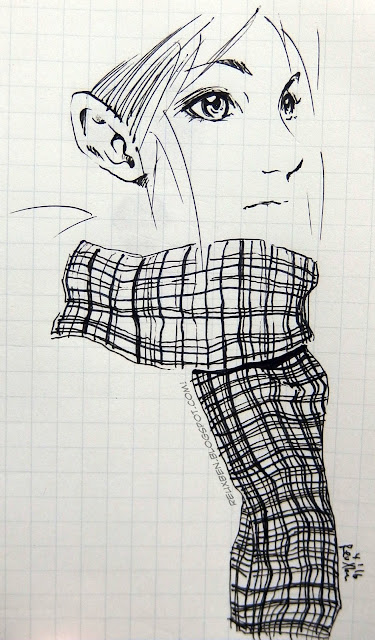 A sketch from the train to Tokyo for the SOI prerelease.

Never is always the motive. 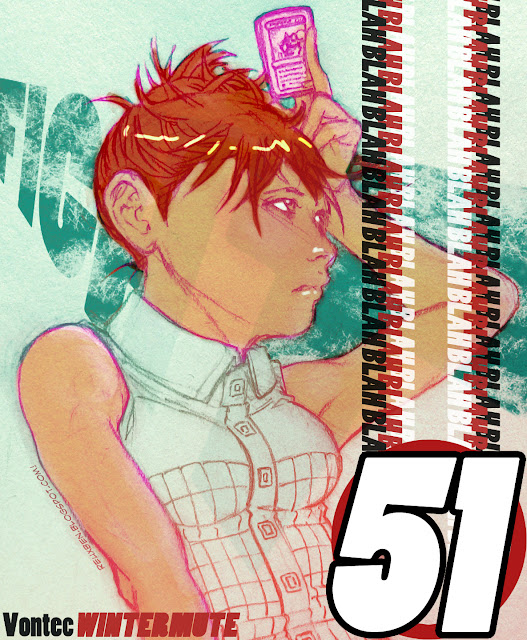 And some digital design dressing because whatever. I was thinking of those old Shonen Jump volume covers.

That's my favorite card, but the way. 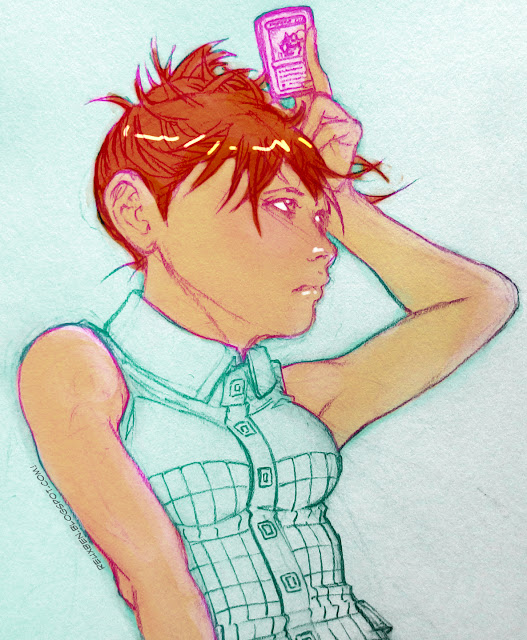 And then some simple base colors for the sketch. 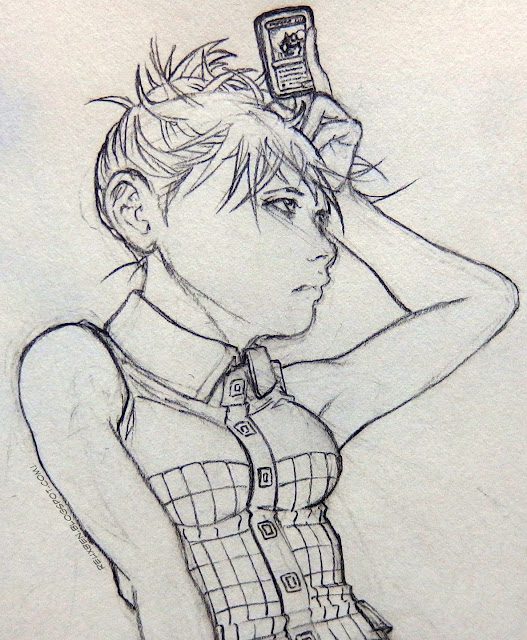 This was just some posing practice that kinda kept on going. 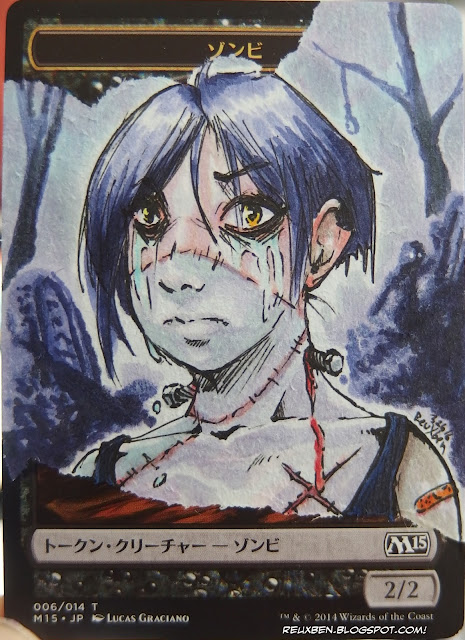 Moar Joombiez for the SOI prerelease.

This looks so pleasing from across the table, all those lovely purples just chilling up the joint.

This was my first time drawing with Copics, too, I just live-inked the background right in there, running mostly on instinct. Really fun, such a novel way to think about drawing. 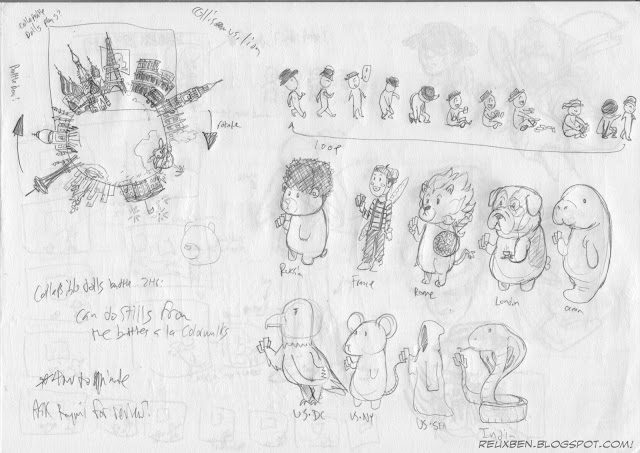 I like the noose tie, but it's probably played-out at this point, if we're being totally honest.

Anyway, I figure her name is Ichabod Fae, a descendant of Ichabod Crane. The first born always gets that name, but she's a girl, so she prefers to be called Fae. She handles odd jobs that invariably have some horrific, fantastical culprit behind them, but she manages to bring the best out in them.

Monsters are people, too.

It's the humans you need to worry about. 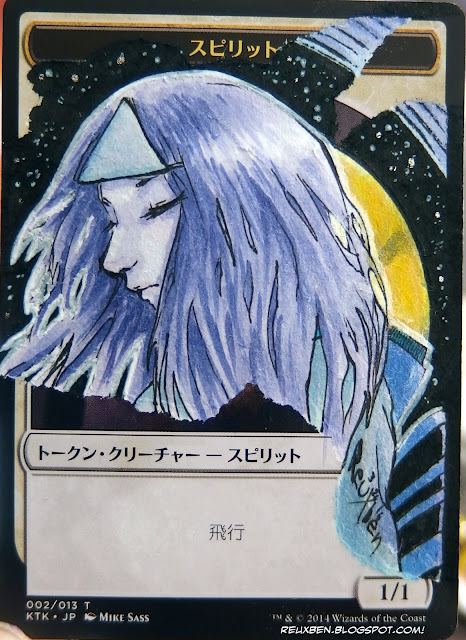 One of our spirit tokens from the SOI prerelease.

I really, really like how sharp the heavy blacks come through when you see this dooder on the table, and the stars really give it some kick. 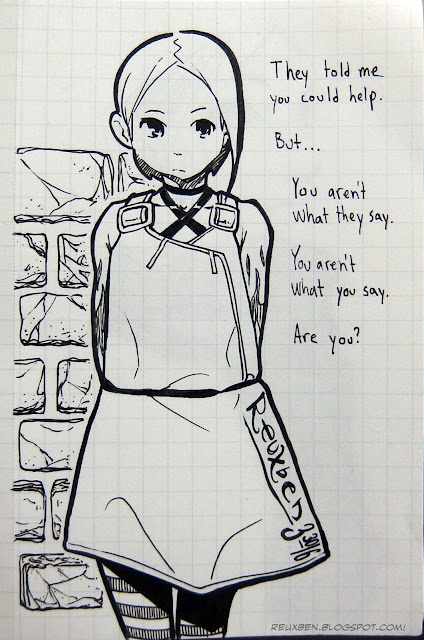 Inspired by a drawing I saw, but hoping to get a little looser with it.

The text is a stream of consciousness exercise with a little prompting for good measure.

Which is saying something. 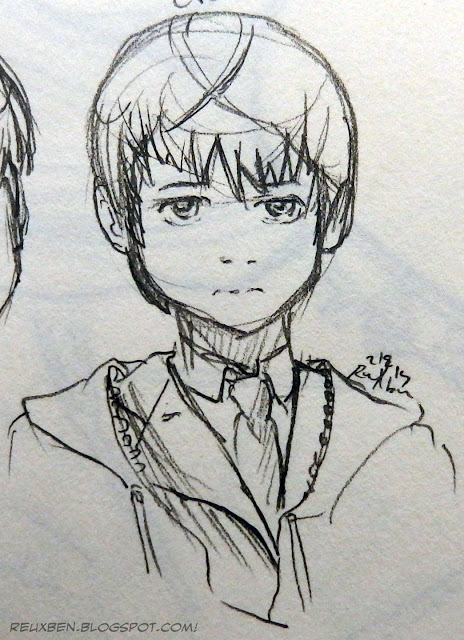 Saw a kid sleeping on the train in the seat across from me one night and he looked like one of my old characters. 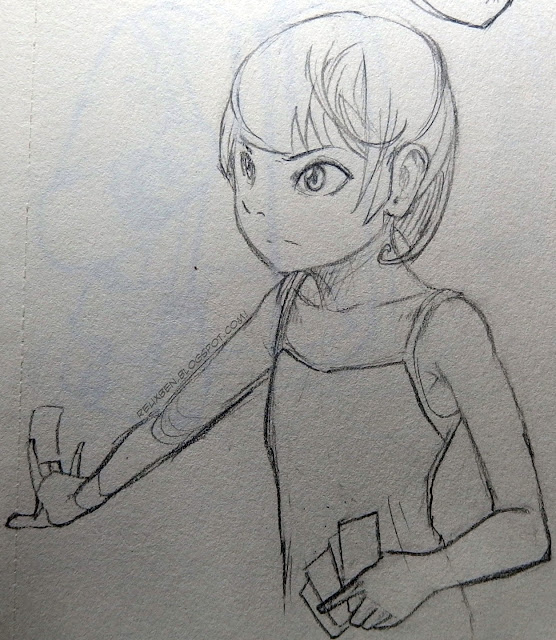 Flipping through an old sketchbook and noticed an early take at a "gamer girl"-type character.
It's been a long-standing goal of mine to make a character like that, as in non-pandering, legit, etc. Gwen from Ben 10 is probably one of my favorite "nerd" female characters, which this design borrows from a bit, I feel. As a testament to how great she was, I forgot to write "female" just now in the previous sentence and had to add it in during editing, that's how unqualified and natural that "geeky" character felt.

That's what I aspire to, just make a killer character that anybody could relate to, but that girls in particular could feel happy with, even proud of. Guys have tons of representation everywhere obviously, so like adults, male characters don't really interest me in terms of being the "hero" of the story, stemming from that same principle that they don't really have the odds stacked against them, and if it's on a platter, who cares? Come to think of it, I believe I've only ever written one story where the "hero" was a male, but even that one was driven by the female character he encounters. And writing that felt only so exciting, since it's like, realistically, what's the worse that could happen? I guess that's why most of my male characters die in the end! That way it's like guaranteed that it doesn't work out for them later on.

Anyway, the nerd-girl character so often feels forced, which comes off like a massive disservice to everybody, especially anybody who could really use a character to look up to. I want girls to feel like going to play Magic or whatever is just like anything--listening to music, going to the movies, watching TV, whatever: it's just something one can do and have anywhere to a passive to intense interest in, but with no special qualifications or expectations involved.

It was a little bittersweet when Jackie Lee and Melissa DeTora went to Wizards because that meant two notable players just vanished from where perhaps they could really make the most impact on young players. Yes, making Magic is excellent and aspiration-inspiring, but there's no getting away from it not having the same profile as playing at the top level and showing people that anybody can become a great player. In fact, I couldn't name another female player, though I know there's that one Lands-In-Fronter, which I am morally opposed to. On balance, how many current R&D people can typical players name beyond Maro and say Aaron Forsythe? Of course Melissa DeTora is currently able to play again after her R&D run ended, but as I understand it she and Wizards seem to be looking to have her back on board again, so who knows how long she'll be someone you can hope to see slugging it out on the big stage?

In more practical terms of representation, if you read, "this electronics store's customers say this TV is a great buy," you would naturally assume a good portion, even 50% of these people were female. If you read "this MTG shop's customers say this sleeve is a great buy," you could realistically expect no females involved in that equation. That's brutal and sad. But I mean, it's entirely realistic. 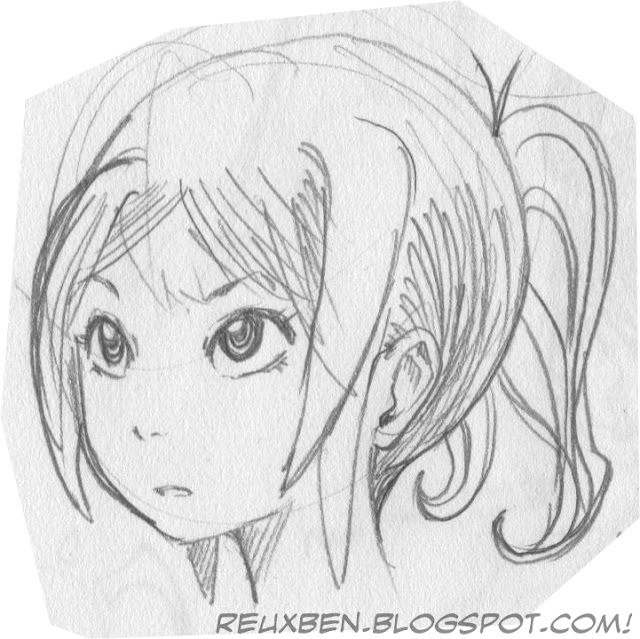 I myself am a minority, in that I see almost no dark-skinned players anywhere, but I am male and I don't particularly identify with my own race, so on the whole I don't feel excluded or marginalized aside from being a non-Japanese person playing Japanese players in Japan. Yes, I feel dismissed or disregarded for being non-Japanese, but I know I can't possibly feel the sheer exclusivity and even fear or literal terror female players must endure at times.

If I'm being totally frank, I kinda hate playing Magic in Japan because too often Japanese players treat you like you aren't a human being for not being Japanese, and they play as robotic and silently as possible (but are all laughs, chit-chat, and sound effects every other round with other players). They behave as if you wouldn't understand a word should they bother to utter any customary narration of their moves. It makes playing and tracking things tedious, like we've both decided to do our taxes or read the phone book together in silence. Or more accurately, one is silent while the other half explains what page he's on as he flips through the literature, with the meaning clear enough through action and tone to effectively communicate in lieu of actual linguistic comprehension. It's annoying. But it's just annoying. I don't fear for my safety at any time from their off-putting behavior. I don't feel like I'm not allowed into the party, just merely not invited to dance.

I remember when I was little, my family stopped into some out-of-the-way rib shack or steakhouse and that was the first time in my generally race-neutral existence I felt weird or unsafe because of my skin color. The place was wall-to-wall white people and country music and good-old-boy garb. There was something in the air. I could feel people staring at us. I expected someone to ask us if we might enjoy eating elsewhere or getting one of those "Are we gonna have a problem here?" courtesies or something outlandish like that, that's how weird it felt in there. I felt queasy. But we ate our cooked cow parts in peace and left and never went back. I imagine that must be on the trajectory of what female gamers have to live with. We could go to any other steakhouse if we wanted to (and did) and have a better experience (and do), but how are you going to roll some dice and shuffle up some cards but from so many venues before you're out of viable options? Not saying that all, or even most shops are sludge, but when the world is so small, even small percentages of dud spots must magnify their negative, possibly irreversible impact on people.

Ultimately, it's sad that it's so cartoonishly rare to see girls in Magic shops. In my JP-lifetime, I've probably seen no more than a single-digit total of female players in Magic shops/venues in Japan, and I went to GP Chiba '15. I played this one girl in Hareruya one time, and I was struck with how cool, care-free, and comfortable she seemed to be, like she was just watching TV or at the movies. She was the only female in this mega-shop that holds 300 seats in its play space alone, not counting the population occupying the actual shop and office area of the floor space. I wish every female player could have that same aura of confidence and inclusion, especially if that is the one thing keeping them from heading out and enjoying gaming like anybody else, and I hope a character I make can contribute to that in some way. That would be incredible. 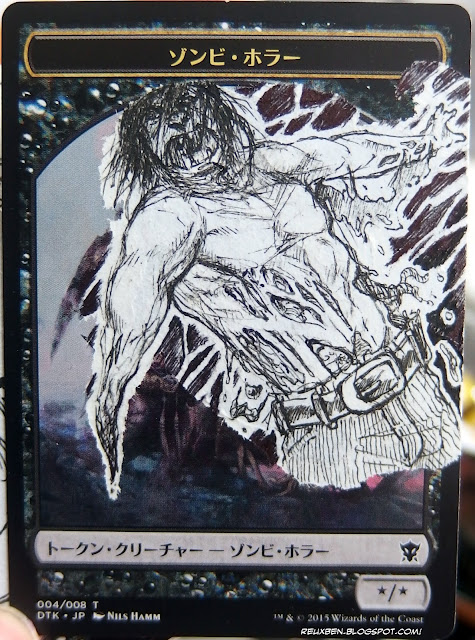 I had this one laying around on my desk and decided to pack it for the SOI prerelease in case I needed any more zombie tokens (did). I didn't really think about the usefulness of the tokens earlier on, I was just drawing to test finer inks on tear alters, and in did this one in particular to test my horror live-ink skills.