I'm auditioning this to-be-named series for the YDN. [UPDATE: Got the job! Title's "Zero Like Me"] The guy's name is Zero and the girl's name is Nyao. She's a crash-landed alien. 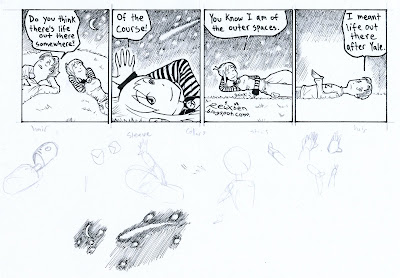 This second one is based on a true thought. Enjoy the margin's scratch work.

Note: these are post-exposition samples, presented out of order just for the audition. 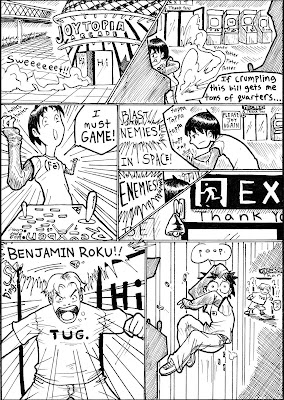 Dracht's back and now things start to pick up.

Feedback: The upper right poll will gauge how we're doing.

Fun Facts: In Japan, we went to a Sega theme park/arcade called Joypolis, which I kept calling Joytopia.

They have excellent exit signs in Japan, and so does JE, actually.

Oh, and jack kelly grants us "awkward" this week. 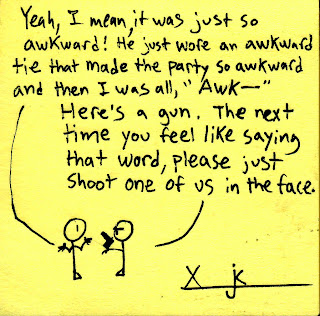 jack kelly is a tactless idiot. 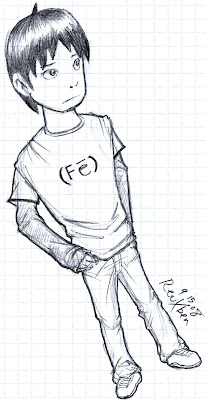 Bored at a meeting of the illustrious, crusty-ous Yale Record, I drew Ben from Quarters Crisis.

Honestly, I wanted to draw Frankie but I felt guilty ignoring the guy who's supposed to be the main character.

Also, I noticed this over at deviantART the other day:

The search brings up exactly 1701 (our founding year) entries for Yale! 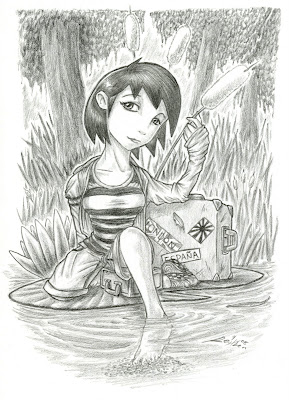 This is a stylistically experimental drawing of Frankie from Quarters Crisis.

I saw a photo on the plane to Yale of a singer and her stickered, beat up, well traveled luggage and thought, that's pretty cool. So that's this piece's theme: a break from the road.

Personal note: I have a cold, but fortunately, the worst of it passed this Saturday night. 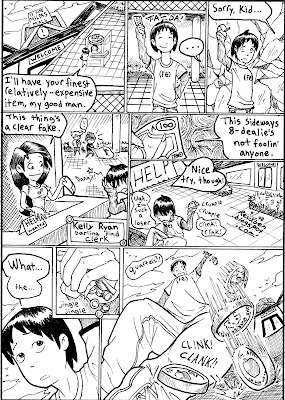 Last change: Ben decides to lay low at the mall but bumps into a rude cloaked figure.
Now change 3!

Eleven panels penciled by 1 am. Yosh!

Feedback: You can now rate each week's Quarters Crisis in the upper sidebar.

Fun Facts: Sadly, I learned the cut off hand/coin technique from Tintin. The Darling Find stuff wasn't originally in. The currency's called Apples (not Berries).

And we close with jack kelly's "lol" for the lose. 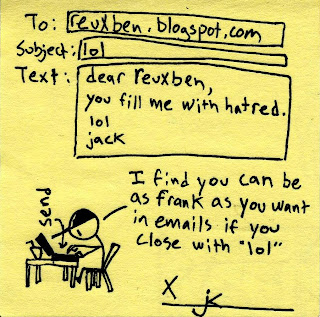 The poor dope doesn't even know how email addresses work. 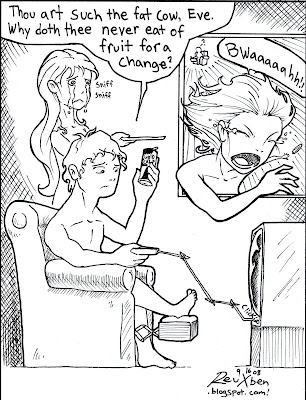 I quit the Herald.*

Appropriately, Adam and Eve kick things off for my YDN comics, Sick Little Suicide. So welcome. The plan is alternate Wednesdays, but it's premiering this Friday because they need landscape on weekdays.

I got an email late Tuesday asking if I'd comics for today's paper so I blasted this one out, no time for jungle-y design. But they do have the original Red Bull.

And I'm finally qualified for IvyGate reviews beyond this, so we'll see what happens.

This is a drawing of Professor Gerow, who led that wonderful summer session in Japan, an experience of a lifetime.

I sketched him during our final class dinner, the night before flying back (the Olympics' opening day). I had the fish carcass. It wasn't as good as the fish at Nikko, or even at our first dinner at the restaurant, but still good. The meaty kabobs were great.

That night I opted out of karaoke to go buy some Maximum the Hormone.

I wish I could return. 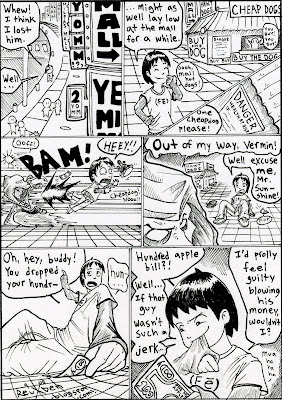 This comic came into the office really late because those rats at JE ate up my comicsing time...

Fun Facts: The first panel's based on a picture I took in Tokyo after visiting NHK "Stajio Paak" but before eating at MOS Burger. Did you know that Kabuki onnagata bite their sleeves to indicate weeping?

Also: You can now rate each week's comic on the sidebar. 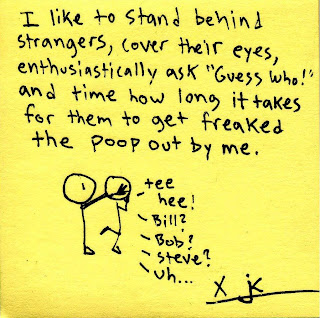 And speaking of rats, jack kelly offers "guess who" this week. 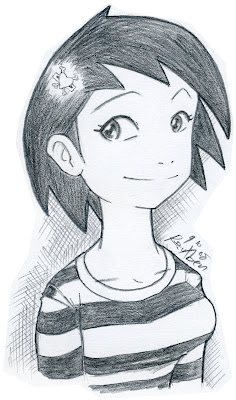 This is a quick drawing of Frankie Paupunk from Quarters Crisis.

I drew it during the Ex!t Players' recruitment show. They had not one, but TWO, recent grads perform. Meanwhile, the Purple Crayon's master, Benji, attended his own group's show, but didn't himself perform...What. A. Rip. As I walked to the Crayon's premiere, I kept thinking, Man, it sucks Benji's not around anymore. And then BAM! I see him at the door and think WOW! One last show! How cool! But no. No show. Dang.

At least my fears that this year's Crayon would, well...suck...have been assuaged. I'm glad my favorite improv group still owns the poop out of Ex!t, or anyone else (I saw the ending of Just Add Water, and it was sad).

Oh, this is also an experiment to see if I can post from a cluster, so hopefully there's an image here. 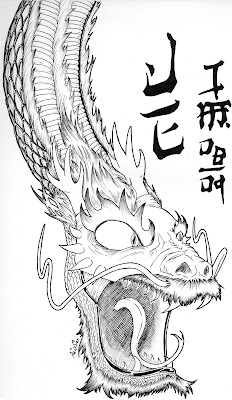 This is yet another futile T SHIRT design for that [wonderful] lump known as Jonathan Edwards College. Specifically, the students of that college.

I cannot fathom how much those people [rock]. These sacks of [smiles] robbed me of my time, my sleep, and my ink. As you can tell from my illustrious history designing shirts for these [people], I was stupid to try again, even after being specifically invited to apply before they even announced the design contest.

After conservatively sending just sketches for feedback on what they were looking for (and lobotomizing the part of my brain screaming, "Why the crack are you wasting your time on these [cool] people; have you not learned anything?!!"), I get an insulting email that refuses the sketches as if they are actual submissions. I guess it's easy to get confused, even after including a specific request for advice on which version I should pursue. This guy goes to Yale.

Cut to several hours laboring on this [happy] project, and not on homework or a comic, until 4 am, then sending an email asking if they'd extend the noon deadline for me to ink. I get an unqualified "that's fine" at nearly 10 in the morning (keep the timeline straight).

I get a few hours sleep since there's church. Afterward I scarf food as fast as I can, open the green light email, then ink for several hours straight. Just before I send the final, I think, you know what would be a wittily bitter message to accompany the image? "This is the part where you give the job to Chittenden."

I greatly respect his colors and whimsy, but the man does every single freaking shirt for JE. Even if he has million-dollar designs, which I frankly do not think is the case--The Game, Rise and Return--why the [joy] does he get every single design job for anything ever by what feels like default? He will probably punch through the hospital wall and name my firstborn child. And everyone will applaud him. So yes, he got the job, a decision which I learned was decided IN THE MORNING, the same time period where I was given the okay to begin inking, as if they were still considering other options. Before sending in the design, I figure I might as well go to dinner and even bump into one of the very chaps involved in the vote, who tries to hawk IMs of all things in my face. No, I don't want to join IMs, do I look athletic? Yes, this same guy goes to Yale.

Recap: the original deadline was noon; they decided "this [Sunday] morning," by definition before noon; that same morning they give me an extension; that evening I go to dinner and endure a frivolous chat with a known voter, submit the piece, and then read the email telling me I wasted my life, complete with cutesy diction as if that makes us square.

This is insane. First: why would you specifically lead me on that I even have a shot at winning these rigged contests--is it because you suspect I greatly dislike you "popular kids," whose names are plastered everywhere when there's some election going on? Second: I try to be as humble and unimposing as possible until I'm licking the grimy dirt off of your shoes, but what the crack (of his!) beat this design? Third: Gloves are off--this college's students have ruined my Yale experience in so many ways I can never forgive them. I don't have a list of people I hate, but if I did, it would now be populated (with asterisks because hate is a strong word).

But don't worry--I get my design used on a banner. YES! SWEET! THAT'S WHAT I SPECIFICALLY SPENT ALL MY TIME AND EFFORT ON. Screw a shirt that will be worn by everyone in the college for years, that will allow me to feel like I actually, tangibly contributed something substantial to this college, like I'm an actual college member, like I actually put aside my disgust enough to serve JE.

No, I won't get anything that I can look at later on to trick myself into thinking that maybe these were "bright college years" after all. "I" get a banner. It will probably get blown over and people will walk on it. It will wear out and join crumpled Heralds in a dingy alley. 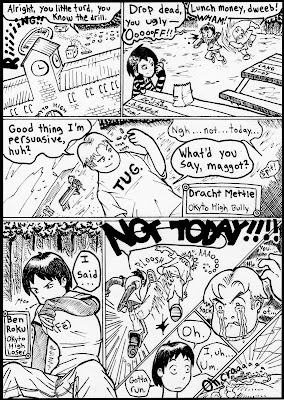 While studying in Japan this past summer, I couldn't understand some TV show so I created my own plot after that first, curious episode. That story sprawled into Quarters Crisis.

Easter Eggs: Lang '51-'07 is my re-dedication to Mrs. Lang, my late AP physics teacher, one of the greatest human beings I've ever met.

Fun Facts: Okyto High is an anagram of Tokyo [University], where this story was born (and originally set). I pronounce "Dracht" Drawkt. 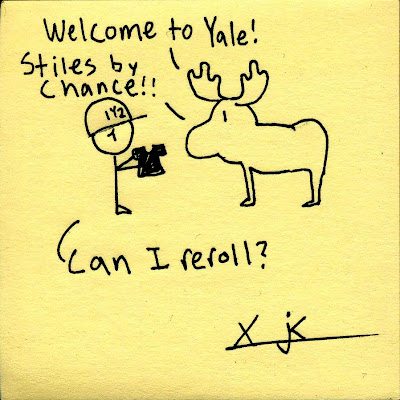 That rat, jack kelly, returns too, it seems, with "reroll." Does he really think that new signature is hip? Geez.

Well, thanks for visiting, and try the new poll feature I've added atop the sidebar; you can now rate the current week's comic. Pretty neat. 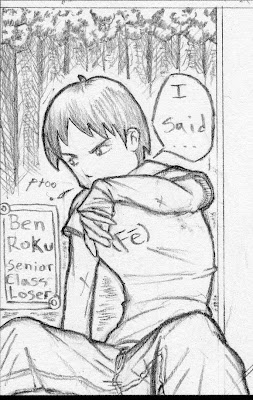 This is a preview panel from my upcoming comic, Quarters Crisis, debuting this Friday in the Yale Herald.

Namesake: An old high school academic team coach typo'd my name, then thought it funny to freshly misspell me every tournament. This was my favorite version. It also provides an excuse to misspell my name. The X is silent.

Goals: Entertaining you, contributing to Yale's having the best comics in the world, training to draw for a living, preserving my sanity.

Email ThisBlogThis!Share to TwitterShare to FacebookShare to Pinterest
Tags: Ben Roku, Fun, Preview, Who I Am, Work In Progress

This is another Frankie sketch, from Quarters Crisis, drawn at Bradley airport.

Right, so I'm posting from that hideous monstrosity, Swing Space, which reminds me: neeeed home Internet.

Oh, and the Freshman Bazaar was fantastic; I hope we get a bunch of great new artists. People loved my posterboard, and non-comics people would clearly be staring at it but then just continue walking on--even some cops checked it out! Ha! I even met a fan!! How freaking cool is that?!