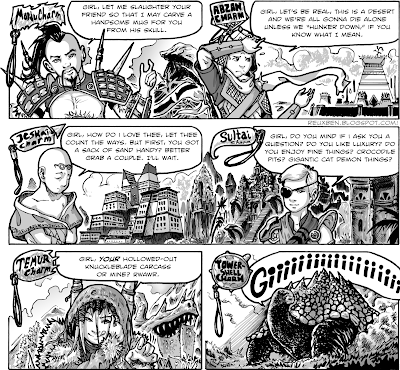 Here is a comic I did for Hareruya, from our little Fear and Removal series, themed on the Khans of Tarkir charms. The concept was just what each clan's kind of pick-up line would be. 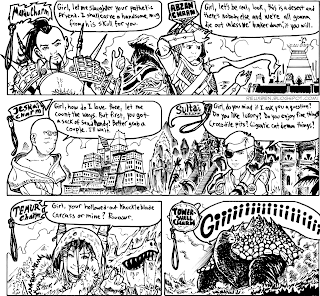 The punchline voice was inspired by Boogie, using his turtley voice. 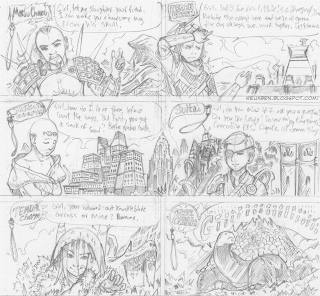 Easter Eggs: Handsome mugshot guy. Do you like luxury skit. Plus all the backgrounds are for the appropriate Khans trilands. Glasses on the Jeskai guy.

Posted from the future for Valentine's Day 2015. 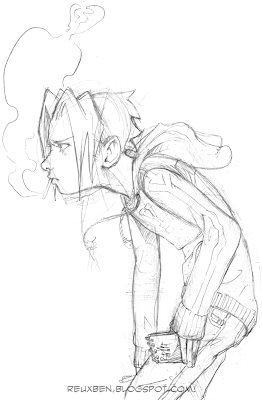 A sketch of an idiot I used to know. 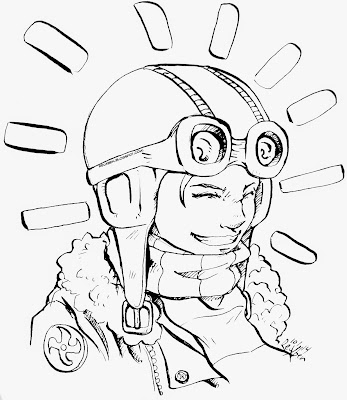 This is a personified version of the Hareruya mascot.
His official name is Hareruya-kun, but I call him Harekun. This was to commemorate the launch of the second shop opening Hareruya-Narita, and to kick off Inktober 2014. I never really used a G-Pen before, so this month was dedicated to using it every day to see if I could get a feel for what the jazz was all about. It certainly started fun and enlightening...but how did it end? 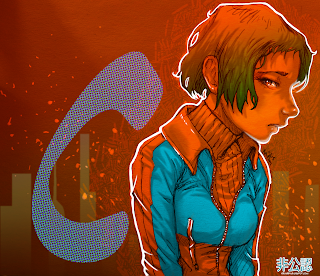 Missed my train back home from FNM so I camped out at a Sukiya and played some Magic and drew and came back and tried coloring it a little.
I used a picture of the pencils since my camera captured with with an interesting reddish tint I wanted to use. I was thinking of stories as I drew it, and it first I just wanted to draw an arrogant Commander player. But maybe she has to challenge the Seven Warlords of the Sea--but for Commander--and if she can't beat them, she dies. Of course when she gets to the last one, she discovers there's actually one more...the one behind it all. Even a prodigy like her surely doesn't stand a chance. 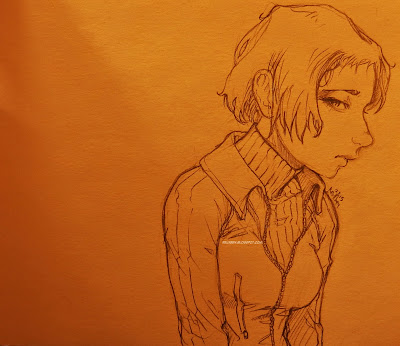 The name Shiko comes from how Japanese people pronounce "C" and a common suffix "ko" for girls. The kanji in the final means unsanctioned, which is how Commander events usually go, and since this would be games with actual lives on the line and stuff, surely these battles would be off the books. 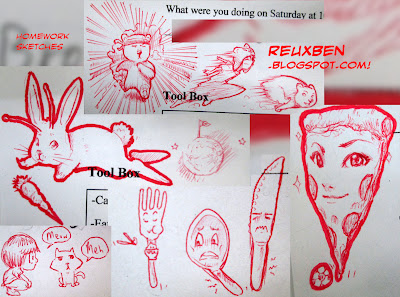 More from last homework sketches' session, on the same "what were you doing last Saturday?" prompt.
This time, we've got jKids who went to the moon, raced a bear, and talked with cat.  Plus a coupla jKids talking about eating delicious food, too. 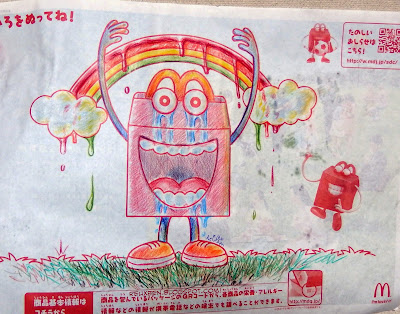 I literally have to see if I remember how to do this.
Exhausted after losing horrifically at FNM, I missed my stop coming home because I fell asleep on the train. My options were to wait in the open-air station with the bums and bees until the first train at 6am, grab a six minute and 4,000 yen cab, or camp out at a 24 hour McDonald's until train time. Fortunately I had my art kit with me as always, so I chowed down to some long-lost McCheeseburgers and McFly's, hoped I wouldn't have to pee or poo for the next several hours, and camped out while coloring this and listening to Kyary Pamyu Pamyu on my dying phone.

Made it back in One Piece. 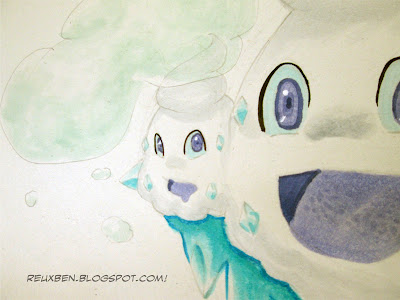 I try and try, but the only thing I do? I scream.

We've got a rough patch...will update when we can. 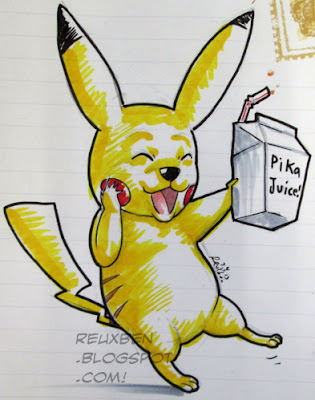 On an elementary visit day, some chibi jKids handed me stationary and asked me to draw them things.
And things I did draw. 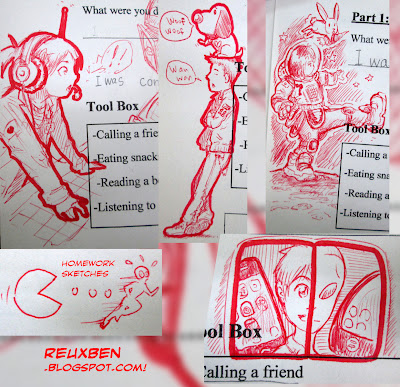 Some homework sketches for the jKids. The prompt was, "What were you doing last Saturday?"
I encouraged them to be creative, and they came out with some nice lines. For example, "I was contacting to space," and "I was eating people," "I was talking with dog." Beautiful stuff!

Side note: when given total creative freedom, jFolk love talking about eating other people, I've noticed. 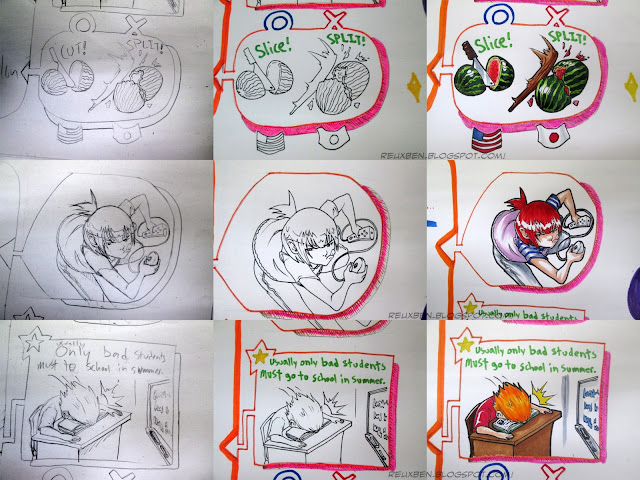 Here are some dudely doodads for our main May ALT poster after our first wave here. 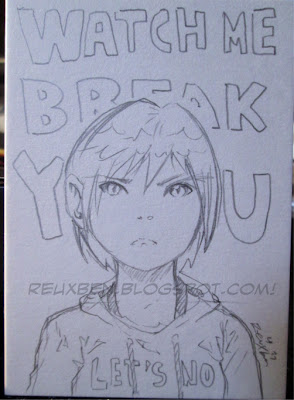 I bought some ¥440 sketch cards and thought I'd give them a try, with the only goal being bombastic sloganism contrasting with an unlikely source.

The durable kentboard sketchcard paper is really thick, so I can't sleeve them (I wanted to start making custom creature tokens) and the surface is tough, but I'm happy enough with them.

Playing with language and what it looks like to me in these homework sketches. 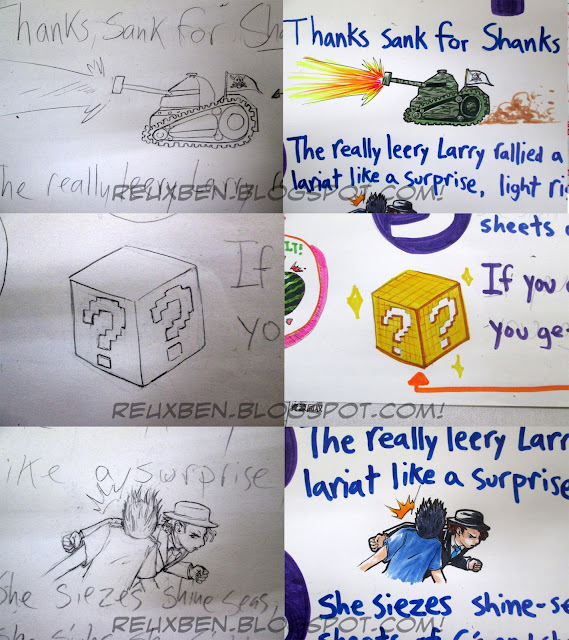 Some more doodads from our main May ALT poster and our second wave's here.
Note the One Piece Shanks Tanks from the tongue-twister section. 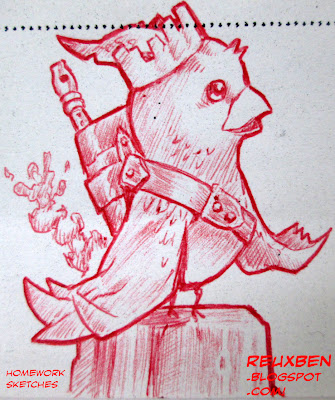