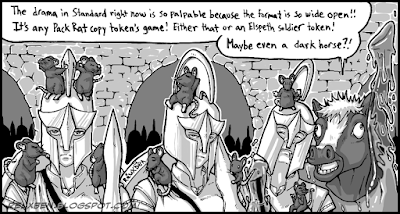 This is the very second comic I made for Hareruya, for our Fear series! I don't have any process shots because I had to just jump straight to inks and then tones to hit deadline, but this was also just an audition piece. However, at the time we we're sure if we would have this one go to print or not, since the first one was more clearly a "Can you actually draw comics?" kind of thing, but this was more like a "Was that a fluke? Should we just print it?" sort of thing.

So to help my chances, and also just personally to see if I could still do a timely "political cartoon," I decided to do a "current events" piece about the then-standard (RTR-Theros) mono-black menace of turn one Thoughtseize, turn two Pack Rat, game. That versus monoblue devotion with Master of Waves, plus Elspeth, Sun's Champion and her tokens to complete the trio of Standard monotony.

People were aching for an upcoming block called Khans of Tarkir, which had everyone's hopes of a shaken-up format riding on it.

Anyway, they pondered the samples for a bit and I got the gig, but by that time, it was no longer timely so we decided to go with something else. 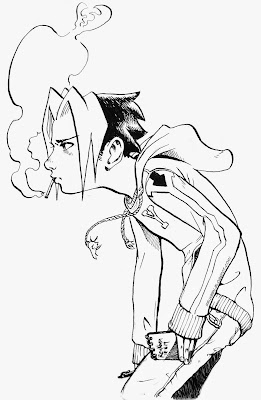 Inked version of this guy. 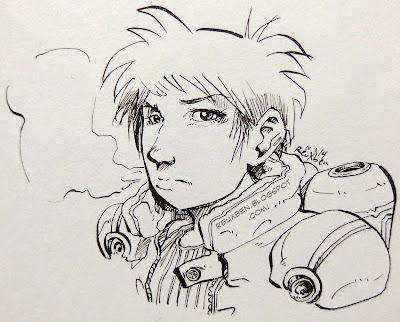 I wanted to learn why so many artists love this thing, and I can definitely see the appeal.

This one I did "live," no pencils! Pretty pulse-pounding. 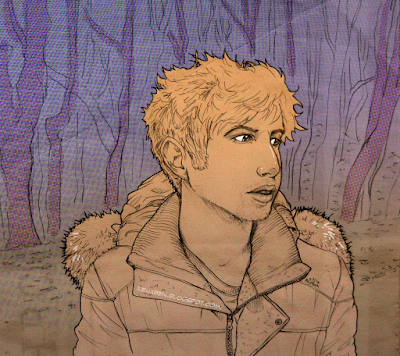 Sketching after work for practice, did this one after seeing a really cool photo.

Here are the pencils: 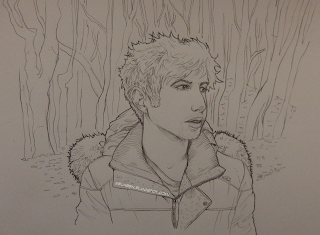 All his music is on my old computer...so I am further removed from the Ivy League than ever...seriously bummed. 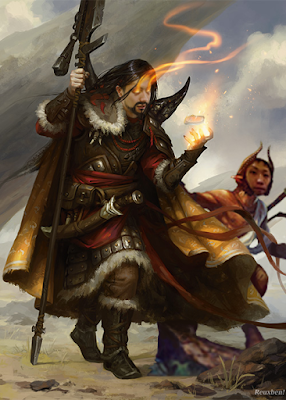 I created #SaitoWayfinder many centuries ago after being asked to come up with a fun hook for a then-upcoming deck-building feature the Boss wanted to do. I made a list of ideas we could use, which involved poring over every card in Standard at the time (full RTR-M14-Theros).

I was surprised to see the namesake Satyr Wayfinder so soon reprinted in the same Standard's M15, but once Tarkir came out, I thought we could revamp it to something relevant to the latest block--though also pleasantly surprising was that the green mulcher became a Standard staple--so I pitched #SaitoDeckspeaker. It didn't go anywhere, but I thought it was a neat idea, though of course mixing messaging isn't without its own perils.

Maybe the hashtag will outlive the card? Maybe they'll constantly reprint it, plane to plane, and we can keep the party going? Only one way to find out. 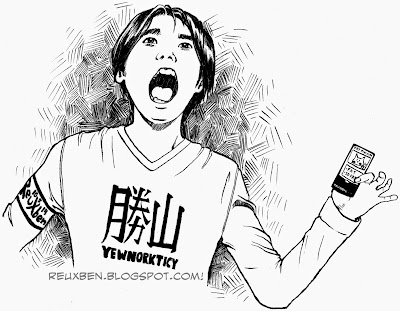 Drew a sketch of Nakamura "Nakashu" Shuhei for Inktober 2014.
I actually got to play him once when the Boss let me draft with them before PT Theros. That was the first time I felt physical fear playing someone. In his customary black-clad, blue-striped silence, he literally knew what I was going to do before I did. It was Yu-Gi-Oh!-esque in its unrealness. What an experience.

Got murdered. Just murdered at triple Theros. I remember he had a Hammer of Purphoros and with blistering speed and razor precision, he sac'd lands with not a trace of hesitation or non-assurance. Not a nanojoule of wasted effort or superfluous movement. This dude knew what he was doing. 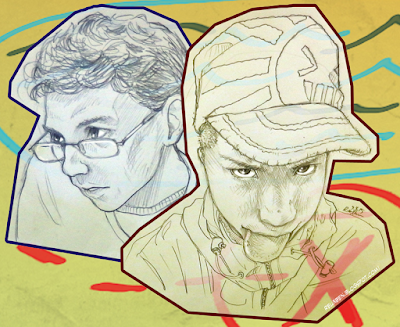 So this started with some sketching practice from some cool photos based on a cool new deck name called "Saito Black," probably the coolest deck name I've heard in a while, possibly ever.

When it came to putting these together, I thought of an old interview I translated where everyone describes their dream, and it felt so One Piece. One guy wants to be the greatest player in the world, but one guy wants to be the greatest deckbuilder in the world. So cool. So, what if they were rivals? Or a team? And the world revolved around Magic, like how the world revolves around whatever the anime/manga is about?

I happened to have some rejected treasure map art on me, so we merged them and a neat little concept was born. 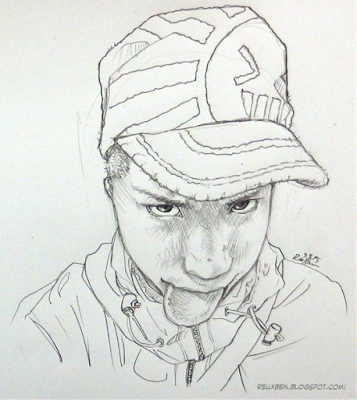 I saw this photo on Twitter one day and knew I had to draw it. I need to practice extreme expressions, and try out some new hatching stylings, so I was excited to give this a try--it's MTG pro Tomoharu Saito! 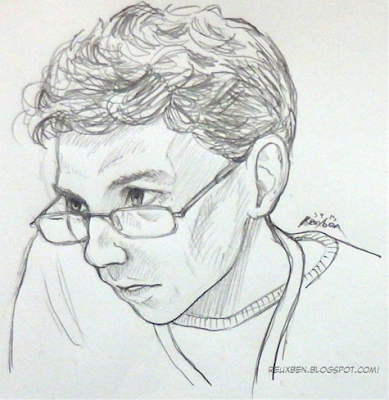 Had an idea to practice sketching some MTG Pros. This is deck builder Sam Black...it was funny at the time. Punchline Friday. 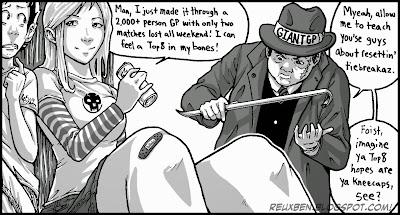 This was the very first comic I ever made for Hareruya, as an audition piece. It was about a giant GP in Chicago were even excellent-performing players just got murdered purely on tiebreakers. We hadn't even named the series yet, but I wanted to call it Fear, though we settled on Fear and Removal. 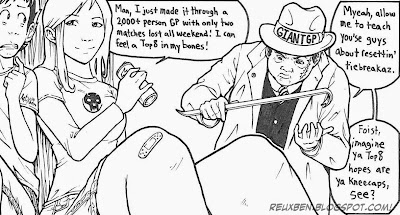 From the get go, one of my goals with the comic was to represent girls in Magic. All the guys are throwaway characters for the most part, but I wanted the comic not to be able to function in any meaningful way if you took out the female characters. 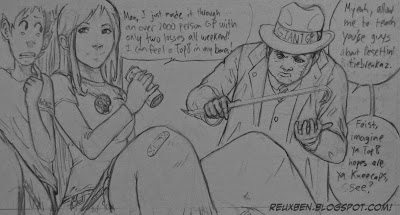 After this one, they asked for another sample, so I imagine we'll show that one soon enough, but this has never been seen by any human aside from the core editors. The turnaround time here was like two days, so I didn't even get to scan the pencils, just a photo and off to inks. 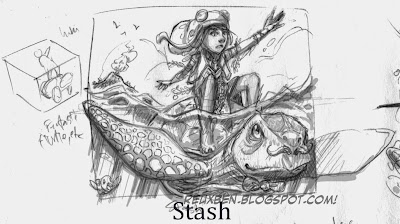 Here is another effort from the Box Design case.
After the initial swarm of sketches, they narrowed me down to a couple to develop further. They liked a sketch that had a turtle in it, so I did a family of Turtley sketches.

Again, drawing with the confidence of not having a shot, I drew with a calming freedom. 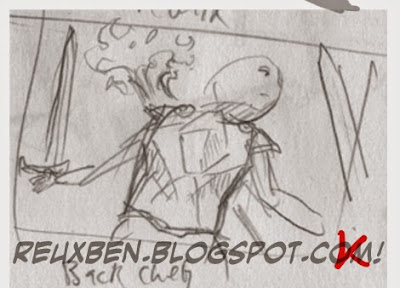 There was a call to design a deckbox some eight million years ago.
I knew I was getting rejected so I just vomited out every design I could think of over two days until I was physically exhausted. I had no idea what they were looking for so I just jammed and designed over 100 thumbnails!

This was a set I particularly liked based on the signature tropes of the different colors of Magic.
I liked this assignment as basically just an exercise, just for the pure mileage, because it pushed me to think of new things I never would have just soloing, driving me to try stuff I would normally be afraid of.

And to my surprise--you'll never guess which one they picked...