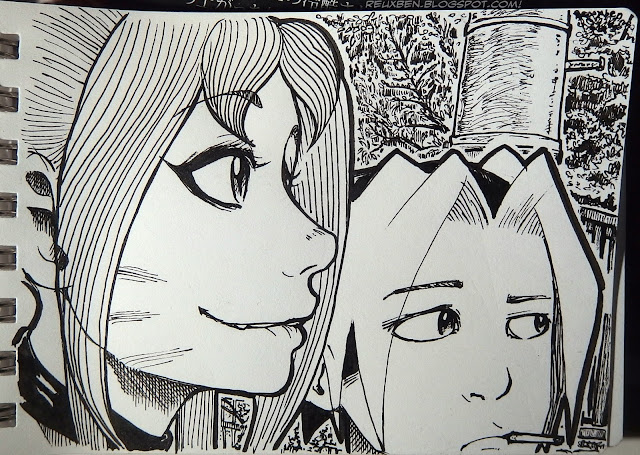 My gosh, I love these guys...I call them "my idiots," but I love them. I saw them walking around the neighborhood, and had to stop them for a pic.

I was rereading some old comics from wiki-walking myself on Deviant Art after updating my ancient gallery there, and my gosh, I loved that series. Laughing out loud to my own stuff, how sad is that? 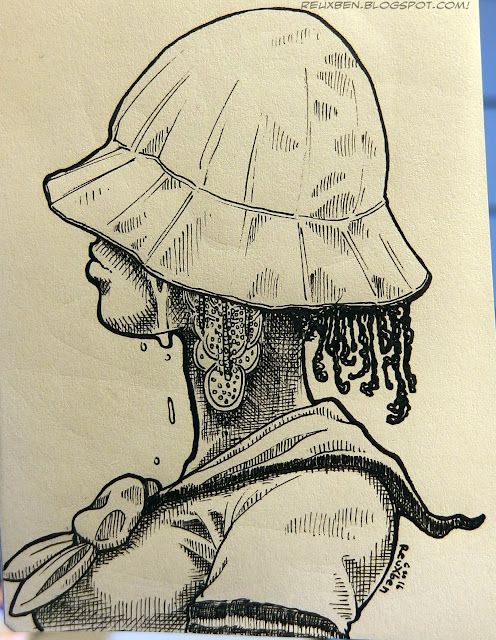 Wanted to draw one of those bucket hats, and then the rest just kinda emerged. 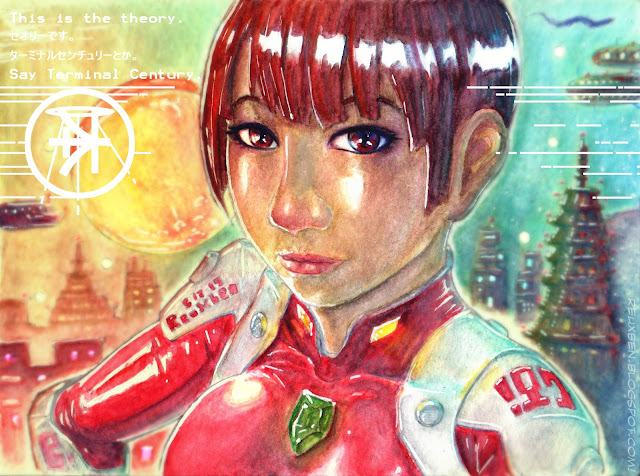 道かが世知辛いのか宇宙空間のほうがより危ないのことに関して、心配しないで。
あなたと一緒に私がいないのこと場合だけ、心配してね。
Don't worry if the streets are rough, and don't worry if space is worse.
Just worry if I'm not here with you. 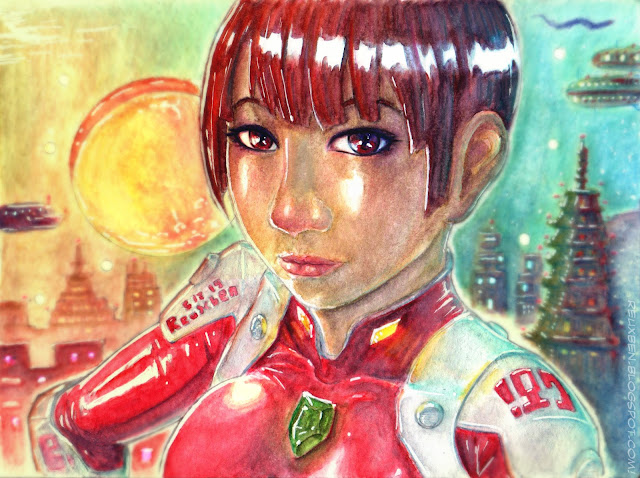 Another experiment in watercolors and digital hybridizations, with narrative implications, as well. 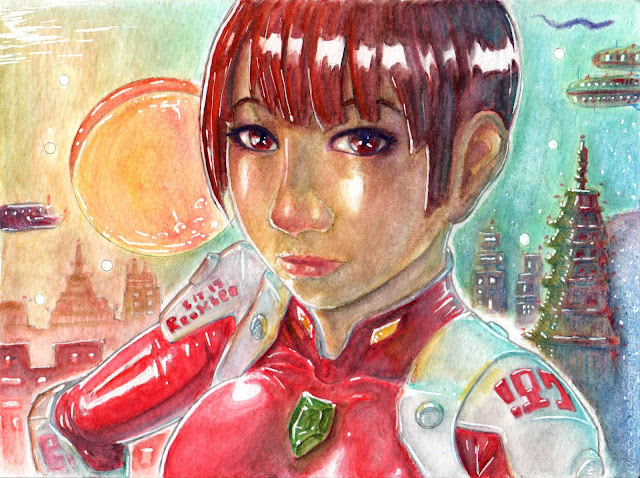 This is the piece simply color-adjusted from the scan. However, I tried something new here: usually I just do auto-contrast/levels, but for this one, I tried biting the bullet and doing it by hand, and I kinda feel it looks a lot better. Imagine that. 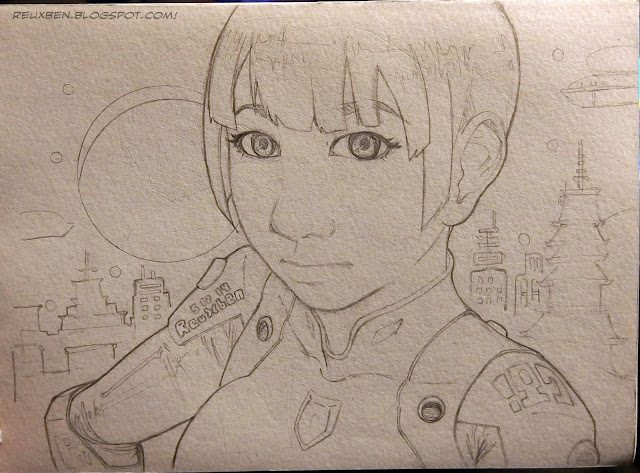 As alluded to last week, our watercolor piece this time was on pure pencil lines, though again like last time, these lines are from 2014, but I do actually still like this vaguely Eva/Tenchi-inspired space suit. I wanna say I drew this after a Sukiya throwdown. 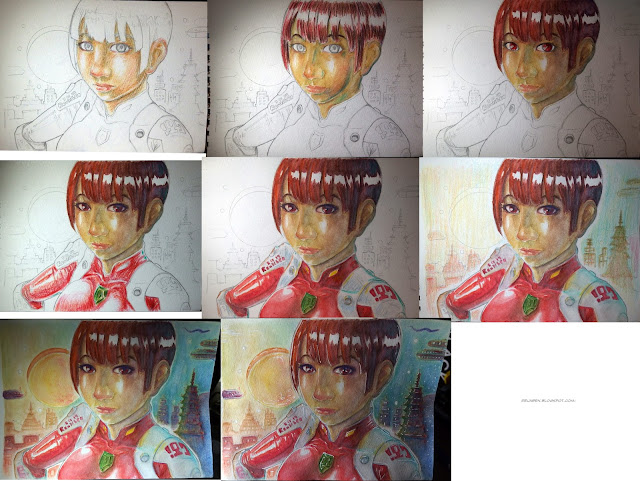 Here's the step by step, again using the same methods as last week, though (not pictured) much more digital processing afterward to give it some punchier colors, glow effects (learned from Algen!), and a more worked background. There was more liberal digital overpainting, too, again in that "image-making" philosophy rather than "watercolor-making." 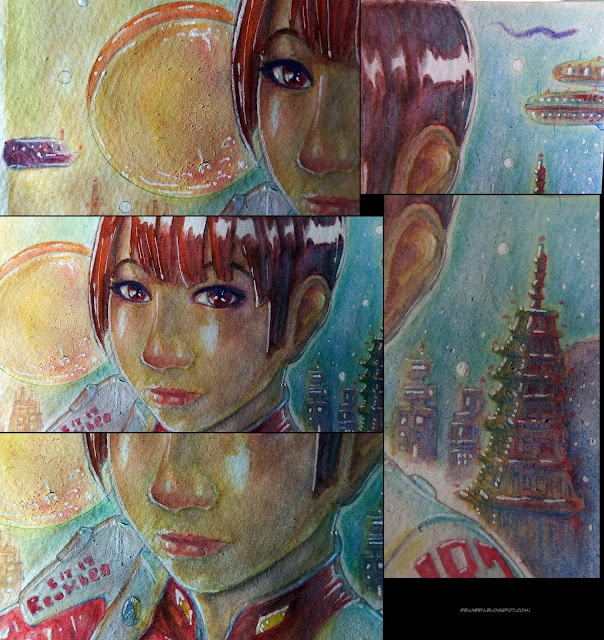 And then some close ups. Good times...kinda want to splurge for the full-set of watercolors now, since after the next piece I did, I realized I'm just a bit limited in which colors I can finagle out of my little starter kits. I bought the three-piece intro "seasons" mini-sets, and while I'm happy with what I can do with them, I definitely need some stronger and softer colors. Though I'm sure a real watercolorist could Jedi-out all kinds of colors from what I have to work with.

The name of the piece, by the way, comes from Benji's nickname, and that "Cadet Death" sounds like "Cadet desu" in Japanese, which basically means "I am Cadet." A pun! The logo I made is inspired by some designs I made for HPB, all of which use the character 本, which means book, but for the purposes of that story was the JP counter for long cylindrical things. But that's another story. 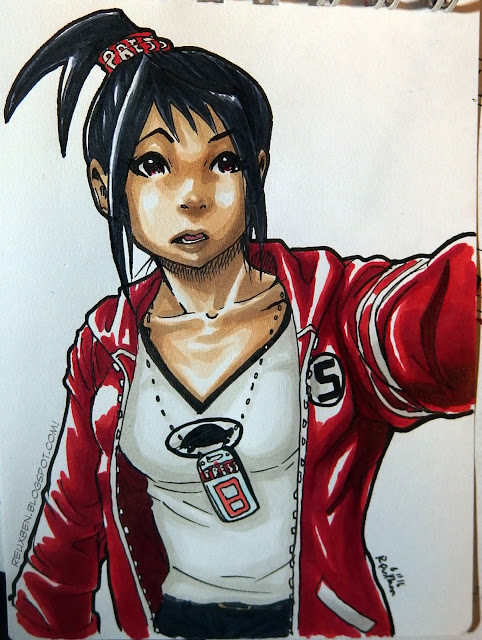 "So, like, I'm thinking prolly photo op over there, yeah?" 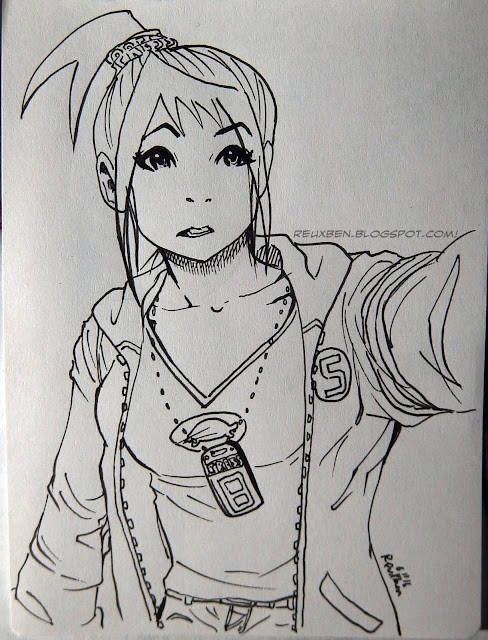 Probably one of my favorite drawings recently, certainly of Vicky.

I drew it with my Signo .28 and decided to test their reaction to Copics, and the lines held up excellently. 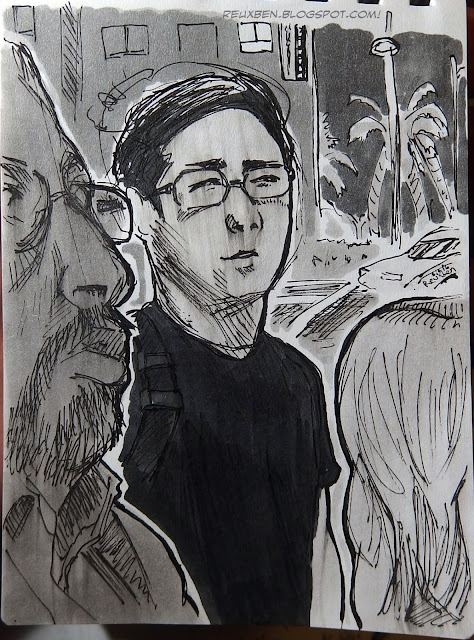 Testing out my new T Copics with the Zebra Signo .28.

There was some smearing in the .28, but I like the texture it gives, like it's painted-on wood or something.

This was a warm up study from a still of Paul Cheon from Marshall Sutcliffe's Marshlog, which is chock full of excellent reference. 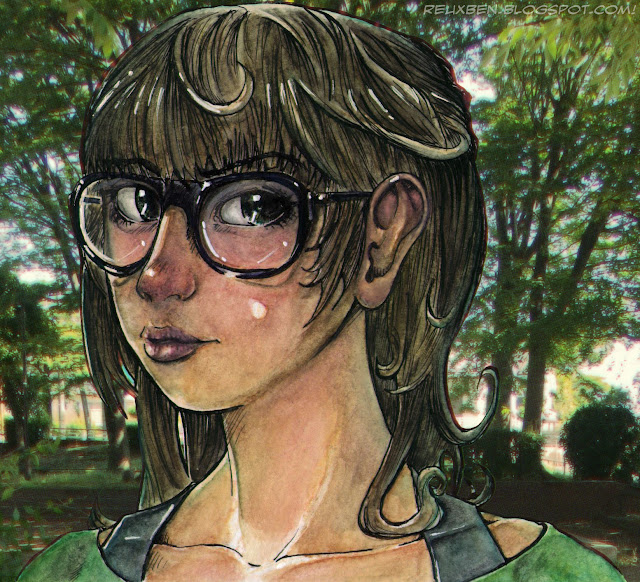 Green like dat moolah you ain't gettin', kid.
Seriously, though, tried getting into watercolors and coincidentally also into actually scanning color work rather than the usual photo snap. To be fair, my camera has repeatedly blown me away with how trusty it is, and I think it might, might be better than my scanner...! 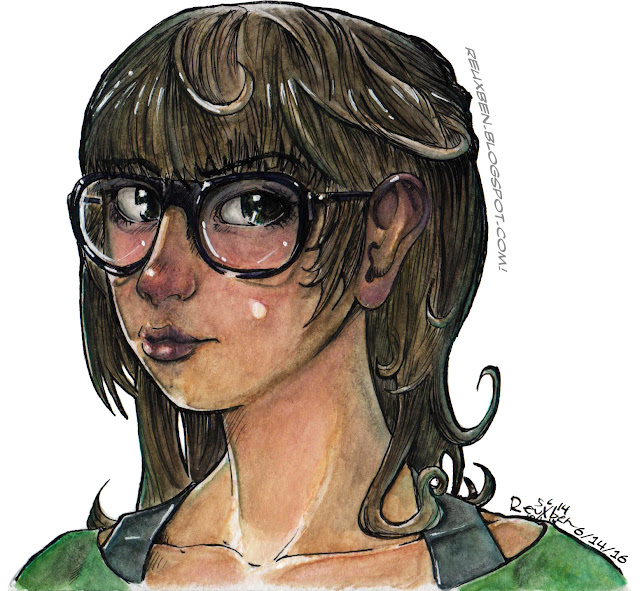 Having always wondered which would win in a fight, I decided to investigate here (scan at top, cam on bot), and the camera does actually seem to be a bit closer to how the picture looks in real life; the scanner shows it a little more red rather than the brown it actually is. Plus the camera seems to be a little crisper...but I can't tell for certain. The main downside to the camera is that I constantly have to battle to capture the image straight-on (hence the varied sizes of the WIP shots) and properly lit (since all the light around here save my tiny desk spot light and my giant window during daylight hours tends to be more yellowish rather than white).

Anyway, today was really all about testing out watercolors (and color pencil touch ups), and fortunately I had an old piece inked up already, so I could cut straight to the coloring. And further fortunately, I diligently photographed the steps so I can "rewatch the tape" later to see what I did myself. I did watercolor earnestly a while ago, but kinda forgot whatever I managed to learn, though it's now coming back to me. 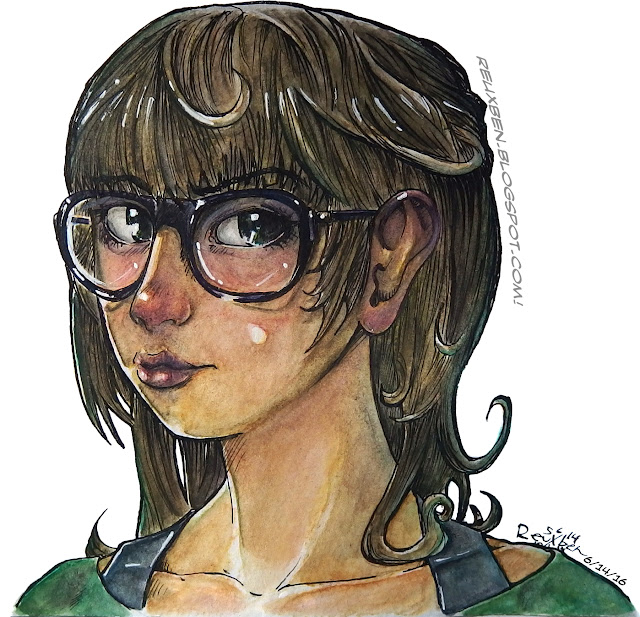 So these are like research notes, I guess: I started with gently layering in the tones I wanted, and placing in light-to-dark in the usual circular weavings and soft swipes for larger areas and subtler incorporation, and then used my waterbrush dealio to work the colors together piece by piece. I'm going mainly off of instinct since I don't have Internet most of the day, so hopefully this is in the ballpark of proper watercoloring. 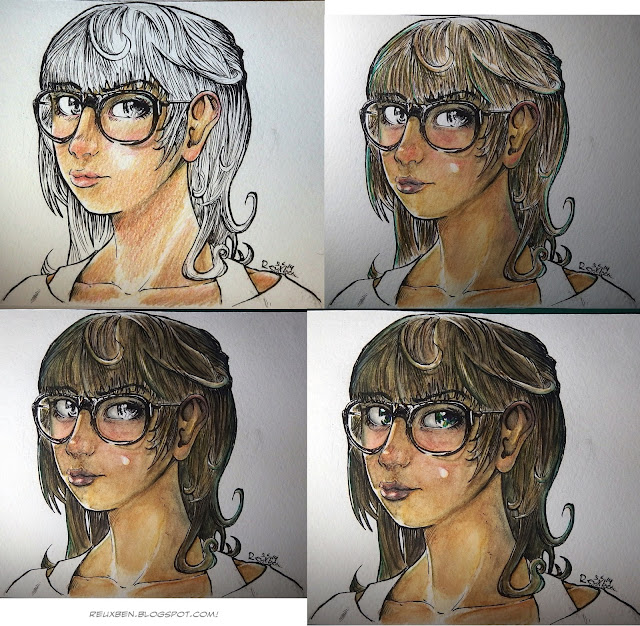 And then I basically just repeated that process till all the colors were in. I then went over like Eisaku with some color pencils to bring some warmth/balance to the colors, and finished everything off with white Signo highlights. I should note that the line inks were with my G-Pen, so I noticed they can run into the colors a bit. My next watercolor piece was on just pencils, and it came out quite a bit cleaner, as expected. After that, I have to test my Signo .28 and my Copic and Micron pens, too. I assume the Signo's gonna get gnarled up. Wonder if Copic markers are wise...I'm sure there's some chemistry involved here I should be aware of. 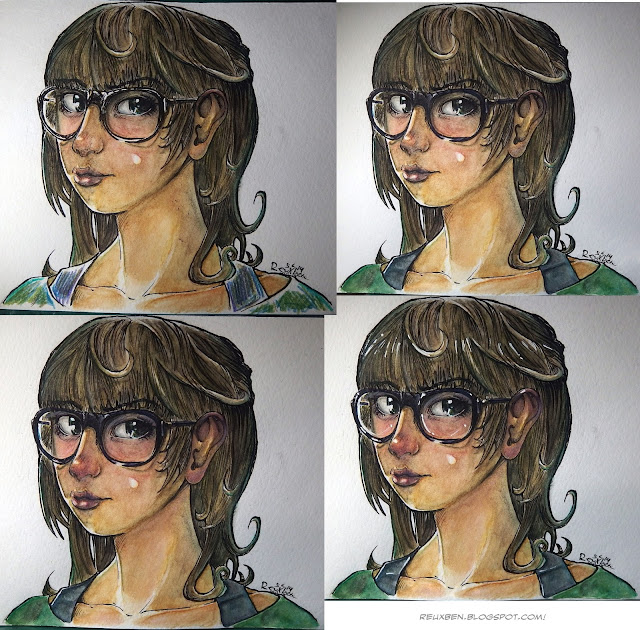 Also worth mentioning, for the final PhotoJam, in the spirit of study, I embraced the concept of "image-making," so I touched-up the piece quite liberally in Photoshop, including moving some stuff around. I used to think this was something like cheating, but if I consider it not a watercolor piece, but an image I'm making--that is, a collection of pixels to display online--then I would like to see what I can make of it if everything on the paper was simply the base layer, like pencils to inks. Or paper to pencil! Taking the production further, I also used a KNKL-informed gradient maps and other effects, too, including some over-painting.

I feel like I learned a lot on this piece, even it isn't that great to look at (the date says I drew this two years ago!); the mechanics involved were quite worthwhile and I'd easily be down to give the image-making flow another go. 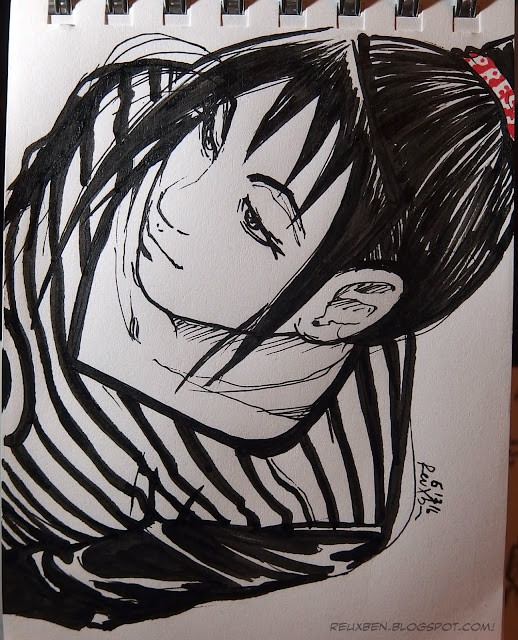 Long sleeves. Saw it in a magazine so it must be true. 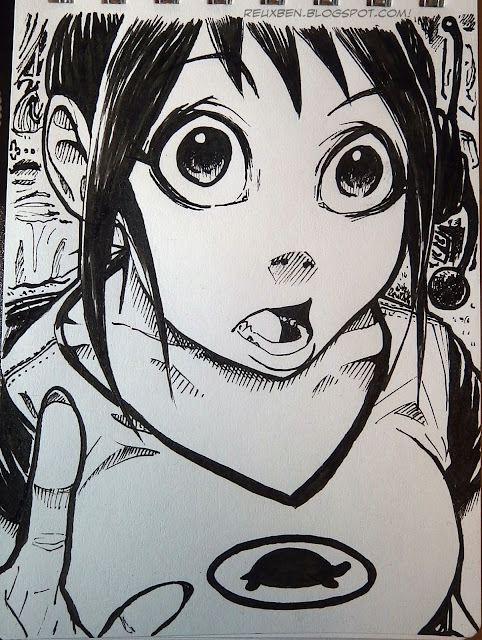 I dunno, I feel the main costume calls for short sleeves, but I like a long sleeve alternative. 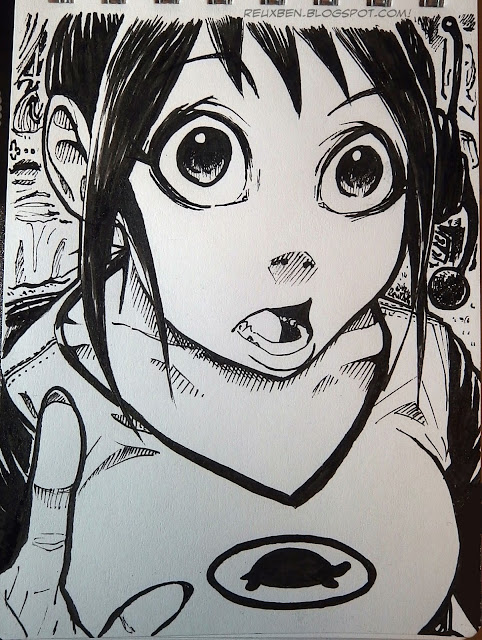 Keep going back and forth. Just like Vicki vs. Vicky. 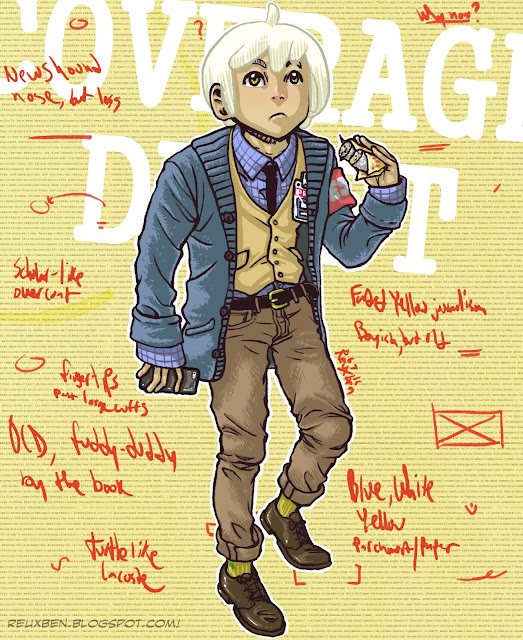 Just something we're boodling with. 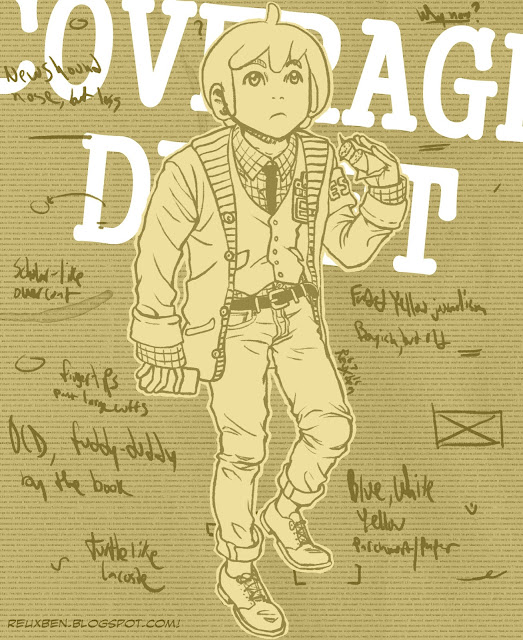 I like that Roman sounds like roamin', also has the core of romance, even man. Close second is "Broadsheet" or "Times..."

Anyshway, that's it for now. 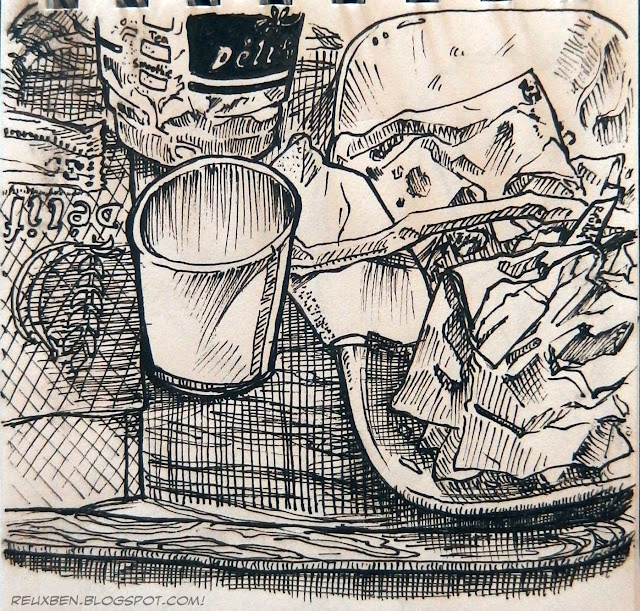 So pumped to find this pen, the finest ballpoint I've seen yet, coming in at .28, called the "uni-ball Signo."
It rips with such a rich and beautiful line, just love it for sketching. The only downsides are it's not a click pen, so it's mildly annoying having to keep track of the cap, which is admittedly not too bad; and secondly, as I later discovered, more troubling is that this supreme ink has a tendency to smudge a touch even days after drying, which is a just a bit dismaying since I keep this pocket sketchbook in my pocket, where the sheets of paper tend to press into each other...you can see some light smearing even here in this fresh photo...

Still a lovely pen, and virtually ideal for traditional sketchbooks not being pocketed around, just have to make sure not to land hands on your lines during the drawing, but that's what guard paper and planning is for. 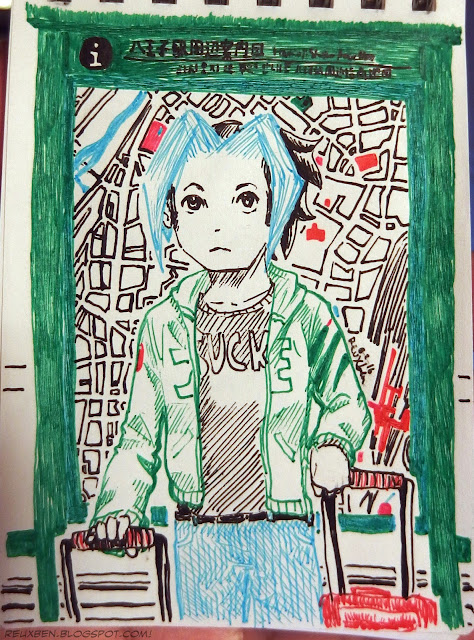 Z is on the road with a new haircut or just an amnesiac hair stylist, to kick off my new pocket sketchbook using my new mini-set of color Sarasara ballpoints. These are great. But the pen selection gets even better... 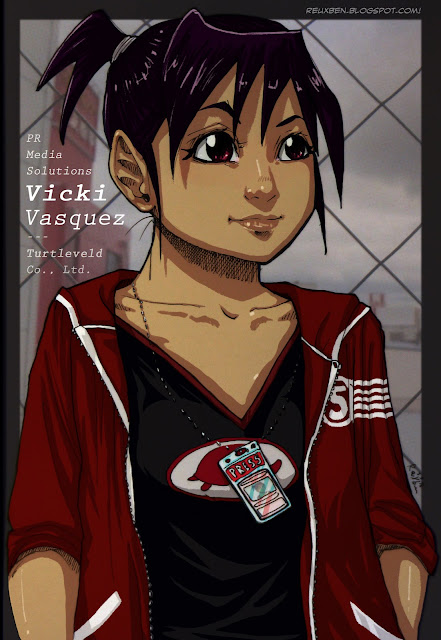 Internet's back up, but only kinda. 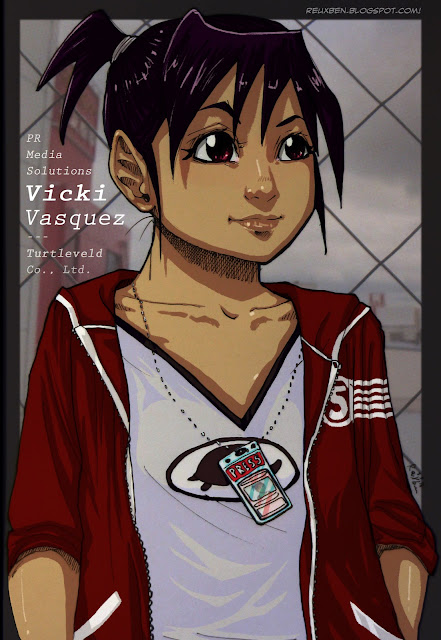 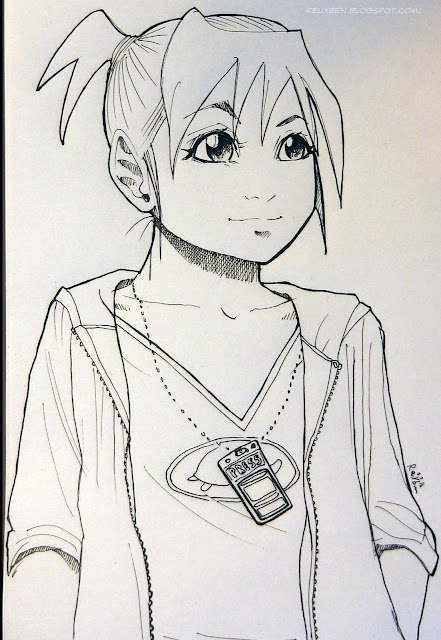 We're in the ballpark with V. 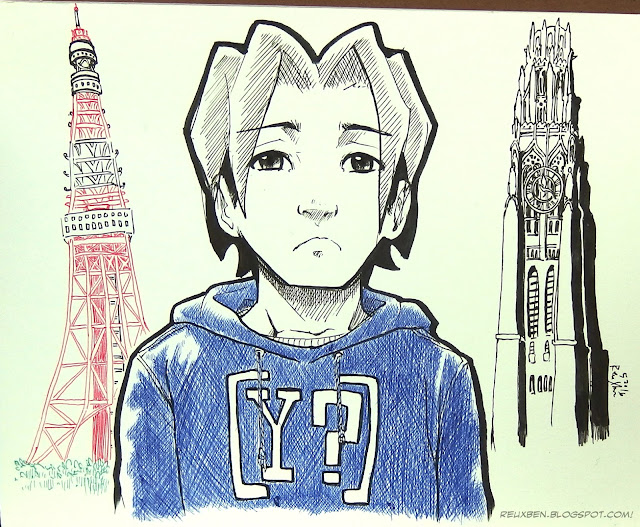 If all went according to plan, I'm now in my new place, back in Tokyo.

Do I have Internet yet, o automatically queued update? Who knows.