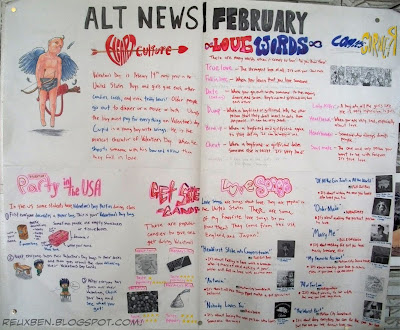 This is our February ALT Poster. This month we highlight my favorite love songs, if you can call them that. From groups like Reuben, RADWIMPS, Fall Out Boy, and Motion City Soundtrack. Plus I teach Japanese kids depressing love-related words like "dump," "cheat," and "break up." Don't worry they prolly don't get it. Maybe.

These are some detail shots of our below the fold pages: A walk-through of how to feel like a loser on Valentine's Day when nobody in class gives you jack. And a close up of our music section. 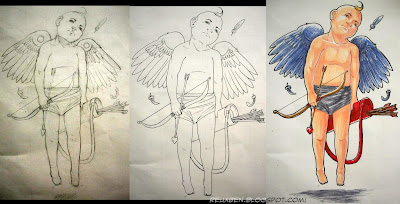 And here's the progress shot of our anchor image. I really tested out my Copics for the first time. Man it felt nice to be semi-painting with those things! But color's a whole new dimension to work in, as usual...

March's poster's looking even Copic-ier, though...!

Quick Chops for some kids I met on an Elemeno school visit!
They remembered me!!

What did I tell you about having self-esteem, loser?

Fun Facts: Umezawa-sensei is yet another antagonist for Zero. She is icy and irritable yet she still heralds the undying Japanese devotion to cute and non-sequitor, for instance today she is wearing a silly outfit including a ridiculously happy hair clip that has nothing to do with her mood.

Baa: For the record, none of what's going on this "season" is intended to depict actual people, events, etc. Ya know? 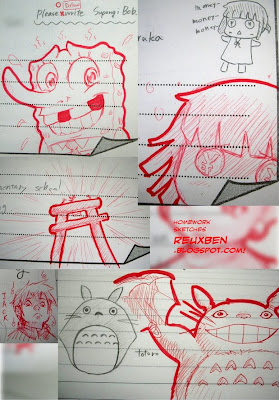 Here's another batch of homework sketches. First, one kid asked me to "write" Supongi Bob. In Japanese, the word for "write" is the same as the word for "draw," hence the discrepancy. And it makes sense--it clicked when I saw a teacher writing on the board one day. From the side, it looked like she was drawing because to write in Japanese is almost like drawing since they have a pictographic written language! Neat.

Next, we had a kid who liked money, so she drew a money zombie, which I tried to riff on. We've also got a torii for someone and a character I invented called Jack. It was a riff on a doodle the kid drew for a King character. Clever right? Right.

And finally a creepy Totoro riff on a cute little Totoro doodle from a kid. She is probably the strongest English student in her class, so she aced the assignment and had time to study her little stuffed Totoro keychain for her drawing. 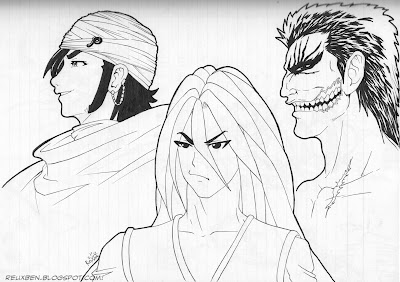 This was a birthday present for a cool little dude, drawn in my Campus Note.

It's after an apparently popular manga/anime called Toriko. The character names got my hopes up before I looked up what they looked like--Sunny, Coco, Zebra. Yet despite its admittedly interesting premise of flavor hunters seeking the ultimate meal, the series has some of the most disgusting art stylings I've seen this side of US hipster comics. The guy on the far right, Zebra, is particularly barf-enticing. Plus Toriko (the title character, not pictured) is an aesthetic rip off of Goku.

I'm not picking this series up any time soon.

This is a special "full page" homework sketch for a student who drew a really inspirational doodle on her homework. She drew a little bunny and a moon and mini sushi, but the moon and rabbit got me (in Japan, they see a rabbit--not a man--in the moon).

So on the back of her homework, I drew a character I haven't drawn in a while, Kaguya, the main character from Tatsuya Endo's Gekka Bijin, a manga based on the Rabbit/Moon mythos. It came out pretty well for a "live" drawing--just red pen of course, no rehearsal or anything, just do it.

Tatsuya Endo is an incredible artist and her(?) art just makes you want to draw. Speaking of which...back to work!

I designed a worksheet for the jKids to practice Can and Can't on, where I'd have a drawing of some stooge and then ask if he can or can't do something, and they'd write their answers below the corresponding doodle (the style was inspired by the great JJ). 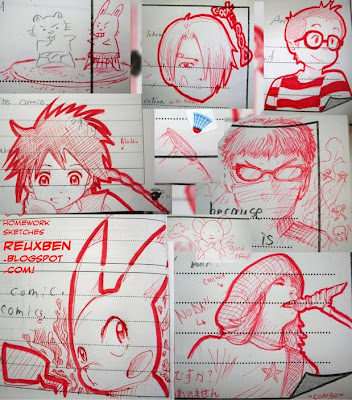 Here are some more homework sketches.

A kid drew a sumo-ish hamster-looking guy, so I drew in a rabbit opponent. Next a kid wrote in that he wants to be a chef when he grows up, so a Sanji he gets. Natch.

Then a girl wrote about her favorite voice actor, the voice of the dude from Kiki.

After that is art inspired by a fascinating piece by a kid who adores Japanese culture's insistence that people wear masks when they're sick (or preemptively to prevent getting sick). This dude thinks they work and wishes he could wear masks "forever." For the record, my good ol' US-borne maxim "cover your mouth when lung-hacking, but don't cough or sneeze into your hands, and do wash your hands constantly" seems to have helped me escape the bug sweeping the nation aka my co-workers, mask-wearers, some of which are now in their second rounds of illness. Advantage Amurrca.

Anyhoo, one kid wrote about his or her love for badminton, so in that goes. And another kid wrote about her favorite manga, one I've been thinking about picking up, Magi. Her favorite character is Jyafuaru, but since I only had my iPoop with me, I didn't really want to expend the effort to figure out what he looks like for the sketch. So Aladdin it is.

Next we've got a pikachu for a kid who's favorite manga is Pokemon (probably too indie for you lay people). And finally a fan of the incredible Radwimps wrote in with some RAD chat, so he gets a sketch of lead singer Noda Yojiro and my first ever extended-effort note in Japanese! So excited I can even endeavor at such a thing! His note listed his favorite song "Cell Phone," and asked if I liked a particular song, and in truth it's actually not one of my favorites, but it leads right into a combo of their two best songs, the last two on their latest album (lead single here).

And that's a tangent if ever I saw one. No duh. 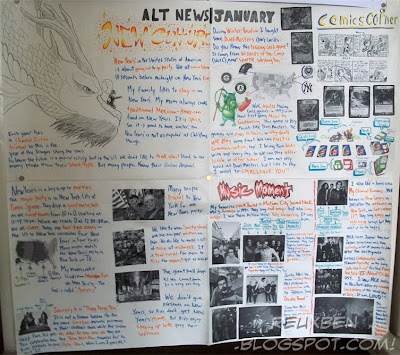 This is the belated second of our two January ALT News posters. It features similar information as last time, including introductions to Motion City Soundtrack and My Chemical Romance, but with some small tweaks. Is it a little too heavy on the wordcount for beginning English learners? Probably, but I don't care, I love talking about stuff I love talking about, and the diction is simple enough that I'm sure they can handle it if they take their time...they've got all month! 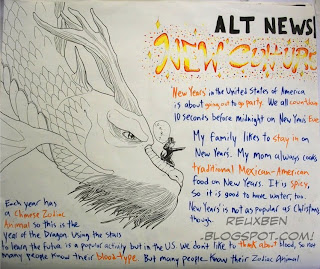 I had to scale back our anchor image because since the previous anchor took so long, there was no way to attempt something as intensive again and still hope to make a decent nigh-post-January debut.

So we have a New Years dragon again, but this time co-mingling with a character in a fancy New Years tuxedo number, like the roaring 20s in New York or something. Emphasis on the "or something." 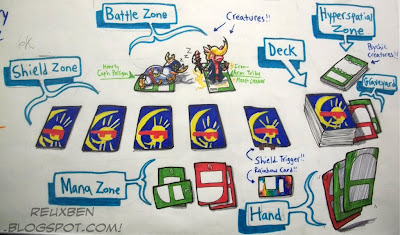 But this was the fun part. After last poster's experimentation phase, I was able to click into how to make a fun Duel Masters display using my ragtag team of markers.

Anyway, back to the poster, to compensate for the colorless anchor image, I markered up a special Bronze-Arm Tribe for this one, but I also made sure to include some more insider-y creatures like Hearty Cap'n Polligon and the even more sneaky Iron-Arm Tribe WITH Mode Change. Yeah. Try getting that one, kids.

These are some homework sketch-jams I kinda-sorta did with some students. The left is a sketch a kid drew for me (haha!) and my response. Please note their original version, before they turned in their papers, featured no underpants...

Next at center is a "famous Japanese picture." as the student wrote me, consisting of various Japanese hiragana and katakana characters: he, no, mo, and ji. Inspired by their initiative, I accessorized their drawing.

Finally, I notice a few students like to doodle on their papers (and desks!) and then promptly erase them before authority figures can spot them. But if the drawing is still legible after the erasure, I try to ink it. So that's a kid's drawing, inked by me. They sometimes randomly end their compositions with "thank you" because they get graded on the raw number of sentences they write. Cheaters. 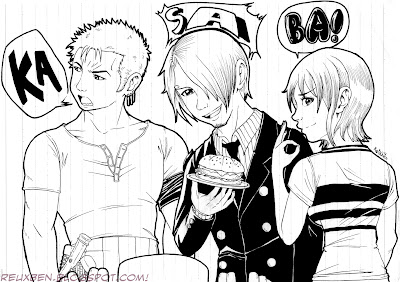 Having finally decorated with various ink maneuvers the piece of paper a student loaned me, here is its result, the follow-up to this piece. No time for markers, but come on, man, you're getting three and a quarter characters--inked--here. We got Zolo, Sanji, Nami, and little Chopper, even, if you squint hard enough. 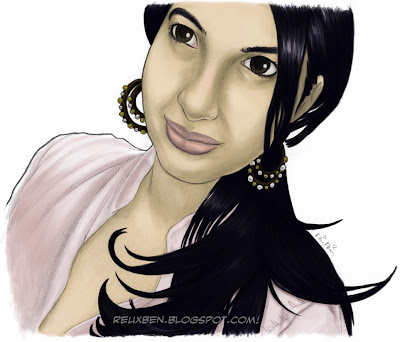 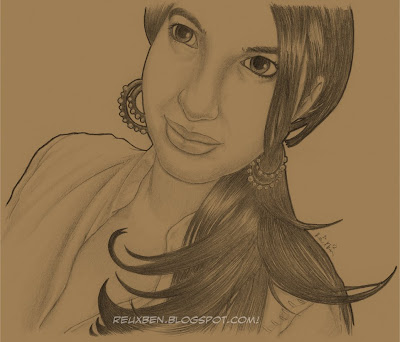 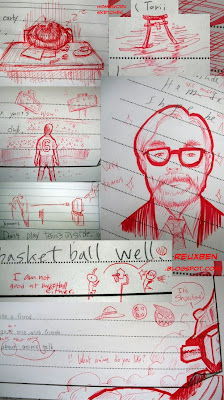 Here are some recent sketches I did on some jKids' homework, or, "homework sketches," for short.

Going clockwise, on an assignment about what family rules the kids'd make when they get older, one kid basically wants his kids never to sleep. Next, a kid named Torii gets a torii. Clever, right?

A kid wrote about a famous guy named Miyazaki Hayao. You've probably never heard of him, no big deal. One kid, who's always falling asleep in class, wrote about wanting to make a friend in high school so she could have someone to talk anime with. So she gets some famous emblems of anime, including a nod to her favorite show, plus a big ol' robot. Their English is limited, so I wonder if that means she doesn't have any friends at present! jTears.

Starting our clockwise ascension, we've got a doodle commiserating with a kid who says he sucks at basketball. Then a kid who's family rules will include the stipulation that his children are never to play tennis indoors. Good to know.

And finally we end with a kid who wants to join a famous soccer club in Spain. Really cool aspiration. Never give up on your dreams.