This is the making of our Bearbee from our 2nd May ALT Poster, teased with an eye-coloring walkthrough here.  I'm using no inks, just Copic Ciaos on this.  This first bit's the yellows.  I like to go light to dark, although I've heard some kookoopants go dark to light...!!  I bought an even lighter blue to handle the wings, but I ended up wanting an even lighter blue!  None to be found at my local store, but I found a bunch of new flavors near the big city one day when coming home from a week in Tokyo.

Next we hit the fur.  If my colorset has an MVP, it'd be the E series of colors, the browns that handle fur, wood, and even hair.  These guys always end up doing heavy lifting, and I've even killed an E35 Chamois!  This one was fun because I was sort of freestyling the negative space for light, and the dark shadowed areas, just intuition.  I treated the head as a separate object, so I went in with an even lighter color for the muzzle. I screwed up on the darkness for the muzzle--I picked up the wrong color and so I had to go darker than I wanted, but I'd say I recovered pretty well, actually.  Towards the end I realized bears have pawpads, so I started ghosting in some space for dark, dark pads, since I could only go darker on the already-colored areas!

So here's where we go darkest on the main figure: dark nose, dark pawpads, then the deliciously red mouth, which is always fun to color, but also kinda scary cuz if you spike the red, there's kinda no recovering!  Red's a really powerful color, right up there with that E47 Dark Brown or that Violet Gray I used for the "black" bits. After that we get more fun reds on the pot and call it a draw!

It's time for more homework sketches.  Up top, we've got a fellow Lugia fan and at right, an Anpanman fan.  What is Anpanman?  Anpanman is a hugely famous character (a man made of anpan--a Japanese bread [pan is Japanese for "bread" (Anpanman characters are named after, and have heads made out of, bread-based foods)]) in Japan that people of all ages love, far beyond its elementary-school target demographic.  Kids and adults like to draw Anpanman because he's a really simple design of basically just circles and semi-circles.  So since this kid wrote about his Anpanman fandom, I decided to try drawing a "real" Anpanman.  Japanese people call "real"--realistic--anything that is more than just stripped-down basic linework. Hope he was "enjoying," as they say.

Next we've got that frog guy from Chrono Trigger for a kid who likes Chrono Trigger.  I have no idea what that character's deal is, I just wanted to draw him since he's not the otherwise too-DBZish Toriyama character designs, which I would expect are too predictable targets of fan art.

Moving on, we've got an amusing report from a fan of Kyary Pamyu Pamyu.  You know Kyary Pamyu Pamyu, don't you?  Of course you do.  Fart some rainbows if you haven't already. I know I just did.

After that we've got some One Piecers followed by Mr. Umezawa himself, based on Mr. Moeller's depiction here.  The reason this post is called "Jitte Isn't French" is because when this card's set (Betrayers of Kamigawa) came out, the more famous Umezawa-bearing card drove me nuts because ignorant 'Murrcans kept slaughtering that artifact's name into some sick French-like pronunciation instead of more closely arriving at the Japanese pronunciation (which--surprise--is just as it appears on the card in English).  Not only did the increasingly erroneous tongue-spasmings annoy me, but that common and more heavily pronounced replacement sound was perhaps the most annoying sound language-speaking tonguemeat can make this side of any word that ends in a "Ch" sound--that horror "zshh" sound, as in the beginning of Zsa Zsa Gabor.

Come to think of it, oddly enough, words that begin or middle with "Ch" sound cute, but I absolutely cannot stand words that end with that disgusting squish.  Oh, how "Ch" haunts "lunch" ...how I hate it so. 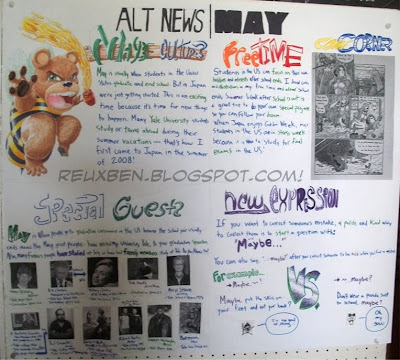 This is the second-campus version of our May ALT News poster.  This one's text covers the same ground, just more streamlined. Sections this month include New Expression, where we cover my favorite passive method of correction: "Maybe."  We also have a dissertation on free time (what's that like, anyway?). Our anchor features a more realized version of the quickly-drawn Jhonen Vasquez-inspired bee-based bear.  I had time to really go to town with my Copic Ciaos, but more on that later.  This month's title logo was all Zebras, and I'm quite happy with how it came out! 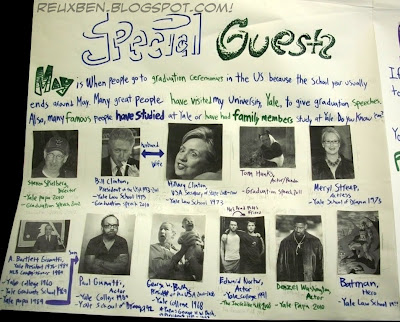 This is one section on famous Yalies.  Yalebrities, if you will. Yes, Batman's there. And I actually met someone who knows who Edward Norton is!  Claire Danes, too, but I decided to cut her for Meryl Streep, since she's prolly a bit more well-known...right?

Gosh, Paul Giamatti's neat, but I had no idea what "Cold Souls" was about...

What could it bee?

These were fun since we got to get away from all the recent ghost talk. But still a lot of ghosts.

We've even got a winding TV game controller weaving throughout a worksheet, my gentle way of pointing out unused space on a worksheet.

Can you spot the kid who visited an aquarium?  At least I think he did, I'm not completely sure that's what he was trying to communicate.  Anyway, it was a fun one to do, and I even got to hear some jKids swoon over it when the papers got handed out live (doesn't often happen; I usually draw these as island-bottled messages).

One girl was a fan of the Japan-originated Alice in Wonderland animation (not the Disney one!), so she gets a Canete-inspired Alice.  It came out a little janky, but works well enough...  One kid worked on his curve ball, so I drew him a baseballing scene.

Finally, my favorite of the bunch was a McCay inspired piece after a kid wrote about a cold dreamland the slept into or something...I love these kids' imaginations.  When they try, they can rattle off some neat stuff.  They just need to feel comfortable with the language, or just feel like rambling with the natural poetry that oozes out of their little brains like breath from their lungs.

Did that just get creepy for a minute?  The answer is yes.

Fun Facts: Didn't realize this was my last YDN-run comic!  So off-throwing having the Japanese school year start in March!  Anyway, when I first landed in Japan, I was shocked to be invited to a "Special Raunchy" by smirking Japanese men...I didn't know what was going on until I realized they were trying to say "Special Lunch."  Was it special? Not really. Was it raunchy? I'll never tell.

Baa: I have a ridiculously basic taste, and I greatly dislike even the smallest of frills in my food.  My burgers get advanced as ketchup, mustard, and mayonnaise.  My pizza tops at pepperoni.  My quesadillas bet' not have anything more'n just cheese, please.  So when living in Japan, I have to make compromises.  I've found that by starving myself, suddenly everything tastes good. 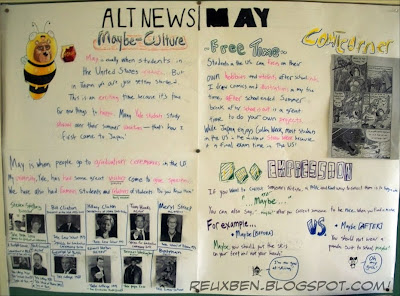 This was rushed a bit, can you tell? I needed to make this one fast so we've got an entire quadrant dedicated to print-outs of people loosely-to-tightly associated with Yale, and two quadrants dedicated to reprinted art.

The jKids wrote a lot about ghosts for what "surprises" them.  A couple of them mentioned horror movies.  But mostly ghosts (and even one or two obake).

I trolled a kid who doesn't like English with images of a Zebra, coco, and something sunny, which are all Japanese things with English names.

One girl likes hamburgers so she gets a cheesy burger.

But a lot of ghosts.

That long-necked rokurokubi is one of my least favorite yokai in Japanese lore, so I tried to draw an appealing one as a personal challenge. Did I succeed? Who cares.

As for what makes them sad, one kid wrote about getting his heartbroken after confessing his love, so I illustrated his tale of woahhh in a 5 cent comic.

But a lot of ghosts.

And Stitch for some reason. 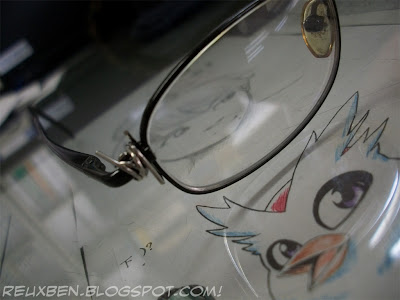 A shot of one of my desks. I know I've posted this delio before, but who's that tinkering in the background behind my MacGuyvered-out, jacked-up glasses?  I'll never tell. (It's Tinkerbell.) 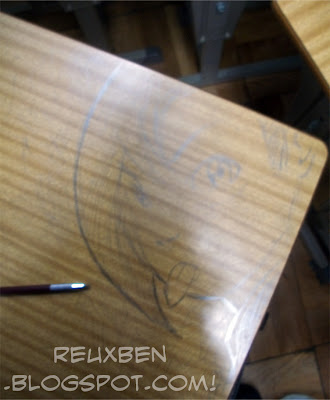 If you squint hard, you'll find a draw I did on a kid's desk with his whacked-out Cruella DeVille style pencil. And this is a drawing I made using chopsticks stained deep with food, sadness.
Reuxben
0 panic attacks Posted by Reuxben at 11:59:00 PM 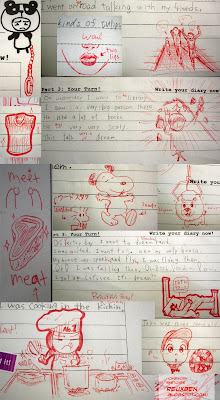 Almost out of the thick of the post-Tokyo time crunch.  But for now here's some homework sketches. Starting at the Panda and moving clockwise, here's what we have:

I turned a panda into a keychain after a writing prompt about a keychain.

Tulips fan gets two lips.  A kid writes about hitting the road with his friends, a shonen visual I'm a sucker for.  Next a fascinating description of a Japanese nightmare.  After that's a lionish stuffed animal in a crane game for a lion-fan.

A scooch to the left is a pooch with a besty, the jKid didn't know Woodstock's name so I transcribed it for her.  Under that is an extremely interesting piece that I hope was original but was probably copied off of something--anyway, it inspired me to drop in a rare Nemo.

Following that is a sketch of a kid I can only imagine exists somewhere.  Beginning the upward swing is a pic for a jKid who cooks like an iron chef or not, I don't know.  Then a crash-course in homophones for a kid, and then we close with a pic for a kid who like a teacher's clothes.

Ok, back to work, 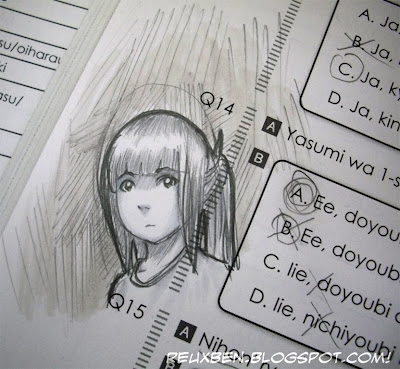 Catching up on delinquent posts...man. 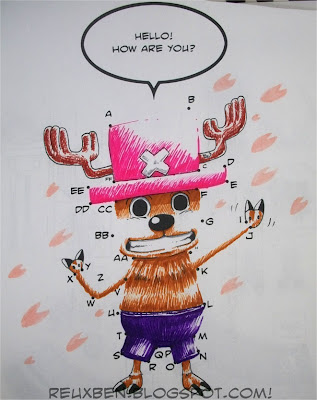 Here's a prize pic I colored using just Zebras for a change, for the jKid unfortunate enough to spot it posted on my posterboard space. Who won it? Who knows! First come, first served.

Hate when people write it as "first serve." 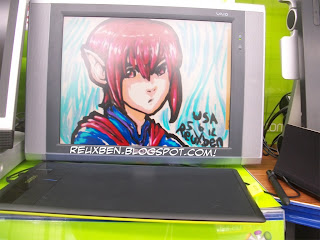 I've been in Tokyo for the past week, so slowly but surely we'll get back on posting schedule. So here we go.

On the way back from Tokyo I stopped by a store to get some ink.  I got lost, but I saw a Bamboo tablet sitting around so I decided to try it out after hearing so much about the legendary just-a-notch-above-etch-a-sketch technology.  It was indeed a bit rough to use compared to my trusty Intuos, but still an interesting test.  Anyway, here's our draw from the sesh.  One of the staff even came by to watch me draw and then he asked if he could snap some photos!

Don't worry, the pics weren't cuz he liked the drawing, he just wanted to make sure I warn't stealin' nuffin...yeah...that's it...

I'm bad at taking compliments, sorry. (Good thing nobody ever compliments me--ZING!--see what I did there?)