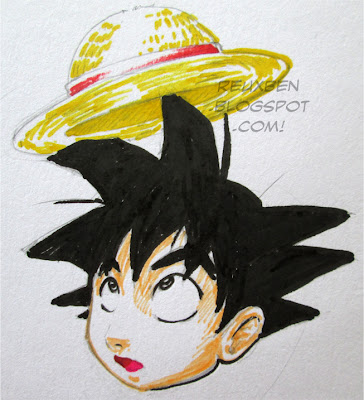 I drew a quick little Goku for a jKid, coloring only with Staedtler and Zebra pens.
It's Goku, but with a twist.  The twist is that he's about to don Luffy's hat.
Clever, I know.
Reuxben
0 panic attacks Posted by Reuxben at 11:59:00 PM 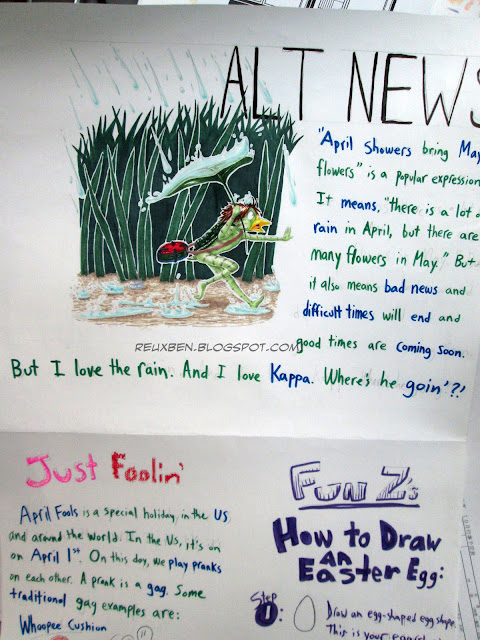 The primary poster is here.

I didn't have any pics of the final board, but this is the only joosy part, really.

You can see the featured segment here.

This month's anchor is my favorite jCreature, the Kappa.

Here's
a
process
of
Copicking
this
guy
up.


I
got
to
really
get
in
there
with
the
greens.


And
contrasting
this
with
earlier
Kappa,
I
feel
I
got
better
with
the
stripes.

Here's
a
making-of
the
piece
at
large.

Here are doodads for our secondary April ALT poster, the main being here. I had decided to try to do a main doodad each poster, time permitting, as a sub-anchor to extend the interest of the piece across the full extent of the page, so here are the pencils for this poster's sub-anchor.

These are the inks on it. The design was inspired by Monster Hunter Epic, a manga I picked up a while ago and whose style is incredible. I love the Wayne Reynolds-esque, bulky armor style Monster Hunter seems to have, where the armor on characters seems to be a tad bit unrealistically cumbersome, such that you wonder how they can actually fight effectively in their gear. It's not terribly practical the more you think about it, but it looks so cool. So this was me trying to emulate that, plus Monster Hunter's tendency to have fur puff out of armor at every possible chance. 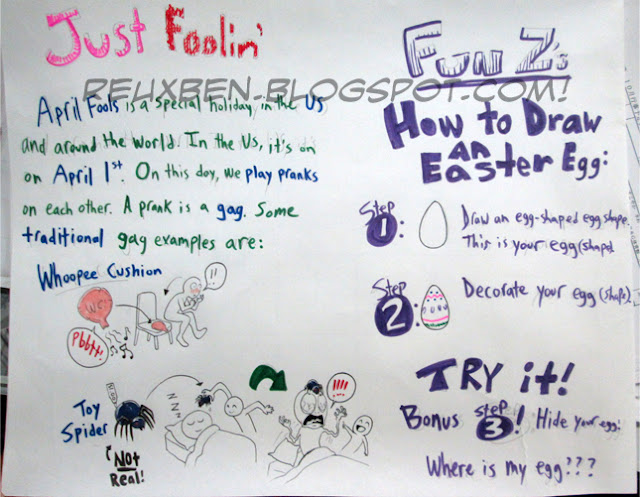 Here a section on goofs. It's a lighter version than the main poster since we simply have less space to work with on the secondary posters. 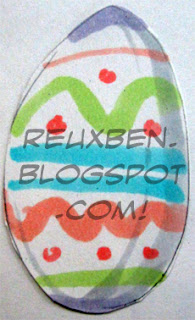 This is a little, literal Easter Egg I left on the back of the poster. If you find it, you get a fabulous prize. Nobody found it. 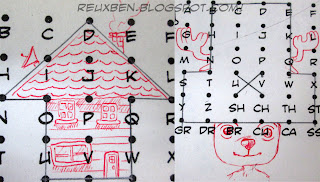 More art alters to that dot to dot sheet, this time riffing off the shapes they made.

Some color alters to worksheet I made on the passive voice were made by me.
Nintendo characters, Kyary Pamyu Pamyu, and DC characters were drawn.

But pencils were put down first. 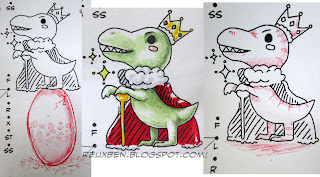 Some art alters to a worksheet I made. I guess these are technically homework sketches, too? 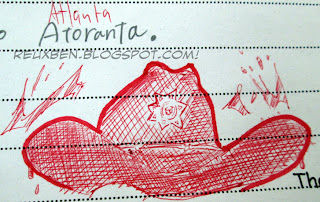 This homework sketch made me smile. Not only is it cuz it's a delightful typo, but because it's regarding one of the uniquest topics I ever encountered, being a Walking Dead fan in Japan. 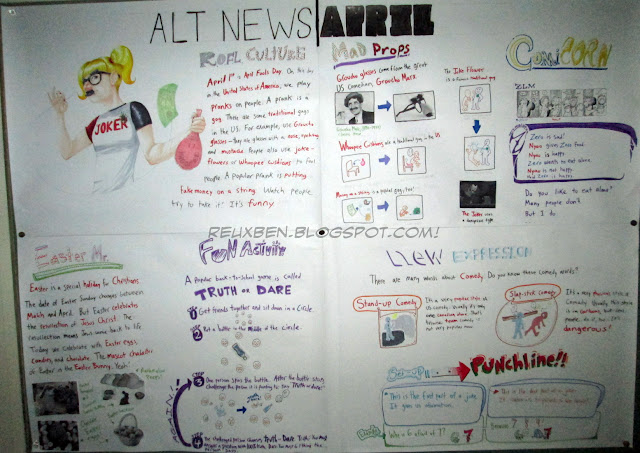 Here is the final main April ALT poster, including a spotlight on traditional US gags, Groucho, US comedy styles, a simple joke, a Truth or Dare demo, and an Easter corner.  For a breakdown of the incidental doodads of the poster, go here.

I am not sure how the gag flower would work in this case, but just go with it.

The pose, if you caught it, is modeled after Groucho's famous cigar-twiddling one, like the pelican and the pickles, but with the Shyamalaian twist that it's not a cigar but a bill on a string that's being twiddled.

Also, the Joker thing was a reference to the use of that word in Japanese society for seemingly arbitrary reasons.

You'll find the word "Joker" on things that have nothing to do with comedy or light-hearted things, like there's a men's fashion magazine called "Joker," when it should be rather be called, "Expensive Things Nobody is Ever Going to Buy-er."

Of this one cooking manga called "Hungry Joker."

Nothing to do with the concept of the joker as we know it.

I think it just means a "cool guy."

Anyway, here it doubles as actually applying to comedy, too, so hopefully Japanese people learn something about the proper usage of the word.

I get paid either way, all the same.
*Rimshot* 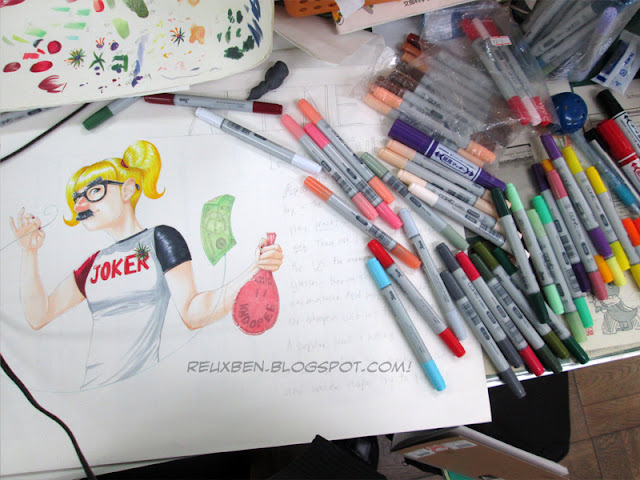 And here is the "staff" photo for this anchor.  Fun stuff.
Reuxben
0 panic attacks Posted by Reuxben at 11:59:00 PM 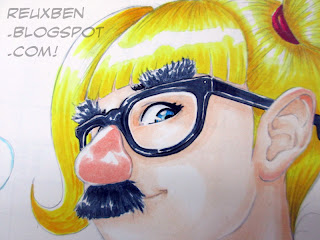 Here's more from the main April ALT poster.
This is a process of the anchor image's face.
It was fun drawing a girl with a mustache.
I drew groucho glasses before, once, and I remember it was fun then, too.
Anyway, now we have copic technology.

Here's a breakdown of coloring in the head.
I tried stacking these images vertically so that they can appear larger here by default.
But it leaves a lot of space to fill here.
So I'll say that I just got some new yellows for this one, and I was pumped to use them.
The other thing was, like I mentioned, I was excited to use the Groucho glasses symbology.
And one of the coolest thing is when a girl is unafraid to be goofy.
So that's why we drew her being goofy.
Does that make sense?
Anyway, the styling was inspired by Harley Quinn, which is why the shoulders--well, we'll get to that next time.
I did spend a lot of time pondering coloring half her hair black, half red.
But I couldn't convince myself beyond reasonable doubt that such a color choice was wise.
So I backed out of it and went on a purely Harley Quinn route. 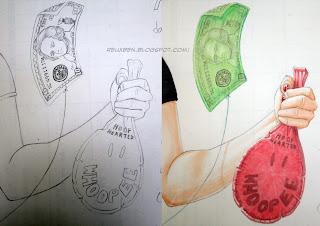 This was also fun--drawing money. Luckily I still have a US one, five, and ten in my wallet, which I was able to use as a model.
I didn't go as detailed as I would have liked for time limits, but it was still fun.  I kinda wish I hadn't used such a bright green, though--even though a real ten is more pink than anything.
And the whoopee cushion! That was really fun coloring, perhaps because red is such a bold, dangerous color; it's really hard to mask red errors.
Reuxben
0 panic attacks Posted by Reuxben at 11:59:00 PM 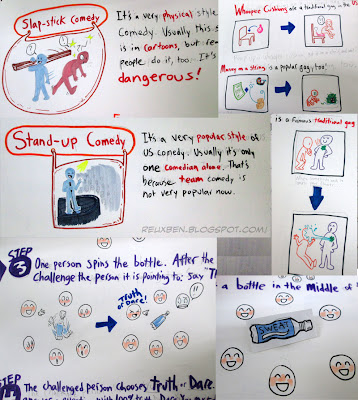 Here are some doodads from our main April ALT News poster.

The theme was comedy, so I was excited to share some light information on comedy. When people say "comedian," I feel like they mostly mean a "humor-based TV personality," rather than somebody who stands in front of a crowd and tries to make them laugh via monologue.
As it was April Fools, I also showed them how to do traditional US pranks.  I did a mime demo for elemkids and they really enjoyed it.
I also added an interactive part of the poster, where you can spin the Pocari Sweat to learn how to play Truth or Dare.

Here are some headings that I thought came out pretty neat.

Plus there's a simple little joke, illustrated to boot, for easy Japanese consumption. I was pumped to learn from a jKid that he actually got and laughed at the joke!

Something neat I learned was that Japanese people think "Punchline" is Japanese-English, rather than English-English. That was kinda funny, itself.

I wonder if anyone understood the Groucho part, though. 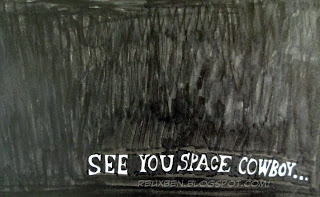 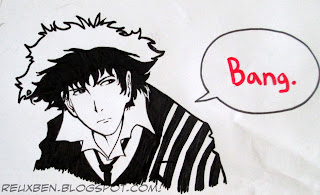 That's what he said. 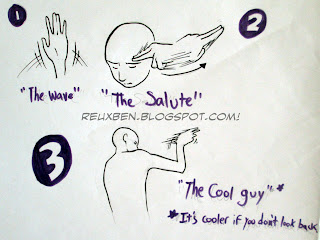