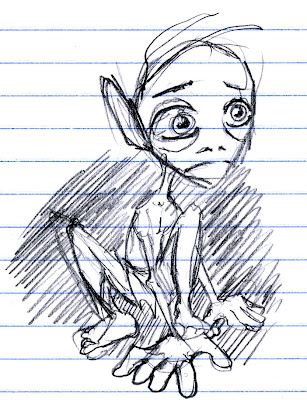 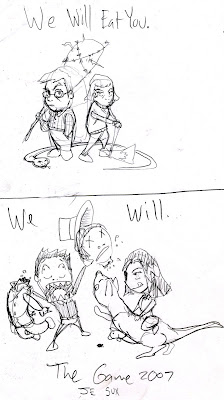 Hello. This is an unsubmitted design I had for the JE Game 2007 T-Shirt Design Contest.

The front features the JE Master and Mrs. Haller striking violent poses while a vicious snake encircles them.

The back features the Dean and Mrs. Farley. The dean is decapitating John Harvard and Mrs. Farley is riding a kangaroo. The Kangaroo's pup is staring at a little spider on the ground.

I thought of this idea just before the deadline, but didn't think it could win, so I let it go. I couldn't resist drawing it up anyway, though.

It's too bad Master Haller's quitting. 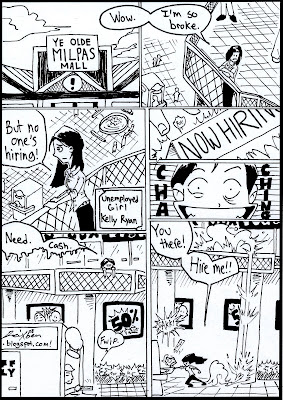 Welcome to the new new series, Darling Find (DF), and this time it's for real. Forget
last week.

On last week's fiasco: Page 15, where my comics appear, reprinted last semester's last comics, so the premiere didn't happen. Last week's comic was to run this week, but I decided to rework it.

The biggest change: backgrounds! Smaller change: now we know how and why she gets an interview.

Easter Eggs: My signature is an ad on that mysterious shop. A poster says Lang, referring to the great Mrs. Lang, renewing last semester's dedication.

Fun Facts: I came up with this tweak on production night, but fortunately finished at 5am, a three hour improvement over last week. I studied One Piece's first chapter a lesson on good intros.

And of course, jack kelly makes a triumphant return with "luxiam." 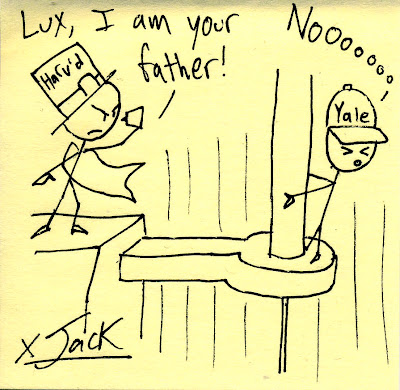 He apparently came by my suite's whiteboard earlier and scribbled out a preview, but I'll catch him some day. 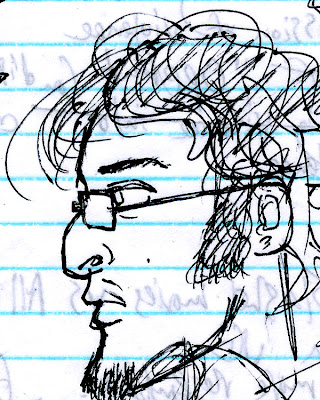 This is a drawing of a classmate from the last day of ENGL114, Power Writing, freshman year.

Ok. Citation news Part II: The TravelCover post gets the tag. But ironically, I'm considering quitting the Record all together. This indecisive paralysis is why I've signed on for just one piece for this upcoming (and uninspiring) "Machine Issue."

What am I doing here, anyway?

The possible saving throw comes from a forwarded email from one Michael Gerber, Record '91, and his friend Joey Green, who both loved the past issue.

Green lauds, "the cover was done by a student?" This along with Gerber's future-driven alumnus support remind me why I'm doing this. Someday, I want people to hunt for my Yale material, like a yearbook photo of Tom Hanks or something. I want people to think, "Wow, can you believe that's really him?"

I originally joined the Record hoping to meet the next Conan (had he been a Yalie, of course). After discovering the Record's current precarious state, I felt compelled to stay if only to say years from now that I took part, or was even a material force, in getting the institution back on its feet.

So now I press on hoping that the ancient Record will stay afloat for the foreseeable ever. And in the (inevitably?) upcoming future golden age, some day they may publish a compilation of the Record's greatest moments--I've already browsed an early 1900s version. Well, I want to earn a spot in that new anthology.

And besides: the current "upswing," if you can even call it that, will certainly get better in just one semester; it can't get any worse. Er...never mind.

That's a lot for a non-Friday post. I have the comics'ing week off due to the Herald reprinting, but I'm going to see if I can work in a surprise anyway. 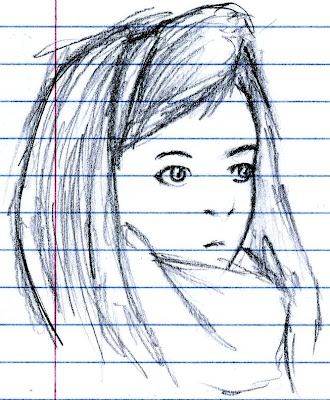 This drawing's from my final day in Spanish class (ever), from last semester.

Citation News Part I: in an obvious pinch for material, the JE tabloid, Temptations--in their atrociously-laid-out Winter Break issue--used my WoZ post.

It's bittersweet: First, I actually did want to do comics for them, but obviously more consciously than this random (and minimally humurous) plucking. And second, I feel torn over whether or not I want credit for the entry beyond "Sophomore."

Ok, so that news wasn't that interesting, but Wednesday's Part II will be! I mean it. Controversy and all that. You'll see. 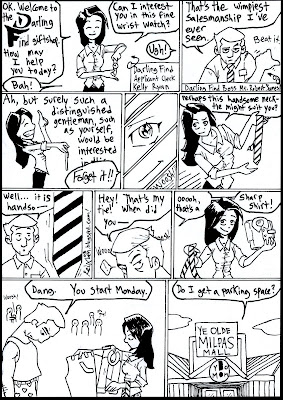 It's been an eventful week for me art-wise, particularly the past two days or so.

But first, if this is my Herald story, how could this guy possibly fit in? Well, he doesn't; this is a different series. That original story isn't quite locked down, and I feel it's worth more development.

So this series is called "Darling Find," and it isn't meant to run too long, but buy me time before "BLR" can launch.

Anyway, details on why this week was important for me on Monday and Wednesday.

Easter Eggs: while some of my family members like to claim stuff I draw is based on them, this is the only time they'd be right--the Kelly's hair is a riff on my sister's latest 'do.

Fun Facts: It was 8am and I decided to abandon backgrounds and just turn it in. Ironically it didn't see print due to a Herald office mishap.

A bit more, I worked about 10 hours straight on "Woosh," skipped sleep, harvested breakfast energy, but then crashed in the middle of lecture after about 25 straight hours of non-sleep! Post-lecture, a classmate woke me up after my black out, and I was completely bewildered: I didn't remember passing out, but my neck was quite cramped. I sit three rows from the professor with no one sitting in front of me, so he probably saw me dozing right in front of him!

If I only had a heart, I might have gotten into that seminar. 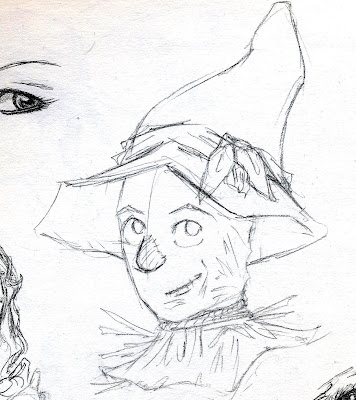 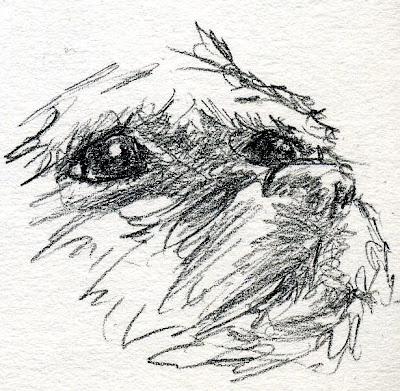 If I only had a dog, I might have a best friend.
Reuxben
0 panic attacks Posted by Reuxben at 8:06:00 PM

Day one and this semester's already steadily swirling down the toilet...

Please enjoy this shot of Ben from Ben10.

He'll have some company in the background eventually. 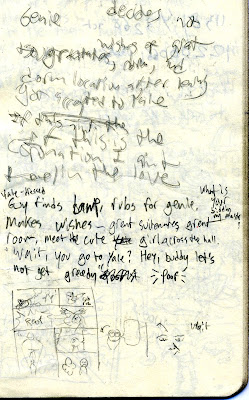 We're about ready to start another Herald cycle in just seven days, so here's the Making Of my very first comic of the year, "Genie."

It actually saw print second, but that's because I pushed it back for a more immediately relevant Freshman comic, "Warfare."

Anyway, here's the thoughtline. The blurry, upper version was written as I was walking, obviously, followed by a cleaned up version later. Below both is a skeleton draft, complete with little facial experiments on the side.

I based the wishes on what I would wish for, with enough tweaks to make it universal.

This is a close up of the skeleton draft, where I dash to get everything down so I don't forget what I'm going for. The framing, as everything else, is really simple because I just want the basic idea. Details come later. 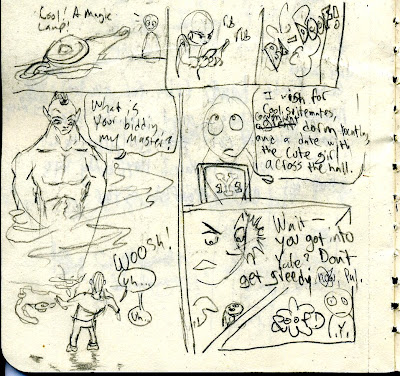 Here's the rough draft, drawn during the very first Herald meeting, which was pretty boring, of course!

I wanted to have more focus on the '11 shirt so that it was clear the guy was a freshman, but I cut that from the final, because of too little space. You can see some rewrites and alternate framing, too. 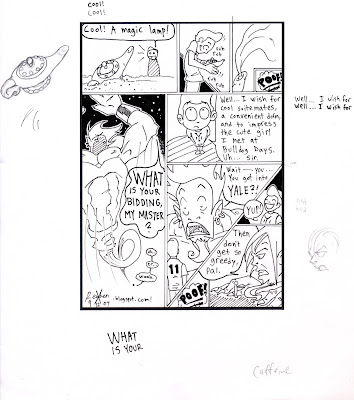 And finally, here's the finished draft.

For MOs, I'm going to include the margins around the comics from now on because there's usually some little doodles that go on while preparing a comic.

Ok, here's to an even better semester in comics, 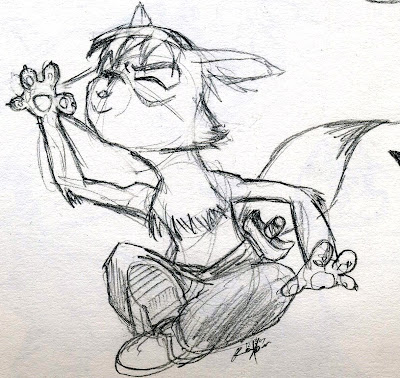 I'm finally back at Yale, which calls for a special post, of course--this time a special preview of my first Herald Comics story ("BLR"*), but he's from a part that won't arrive for at least a couple of months. So while it should go under "Herald," it's just "Fun" for now.

What is it anyway? It's a development sketch for a character called Wolfboy. I really, really hope everything works out and we actually get to him. But there's still a heck of a lot to do before I feel comfortable unveiling more, so we'll see what happens. I'm excited, but scared.

*"BLR" is just a placeholder name while I think of something with more punch. 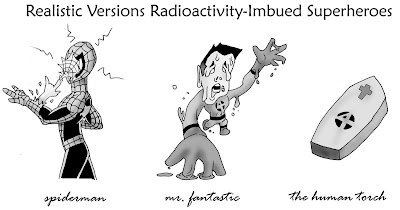 Just by pure chance, I visited the YDN page and discovered that the Tower Parkway (<--where I live) power plant (<--near where I live) was ablaze!

Well, here's another power plant-related disaster: it's my first submission for the Yale Record, from way back in that wonderful, beautiful time I like to call Freshman Year. The assignment was to depict "realistic" outcomes for superheroes after their radioactive origins.

It was for the equally disastrous Nuclear Issue, the first issue of last school year. As rough and limited as the piece is, that's just how pure and unlimited my first year felt. Ah, I miss Freshman Year.

Fun facts: This was the first time I'd ever seen my stuff Photoshopped. And who else but the unflappable Chittenden to cover colors. It's also a fun(?) contrast to our most recent collaboration, the Travel Issue cover. Completely opposite: wonky pencils and inks, and it's black and white. 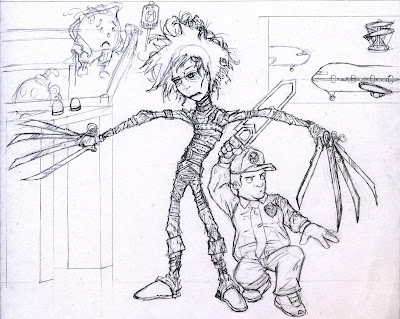 This week's the Making Of...the Travel Issue's Cover for the Yale Record. This is my second cover, but it's significant because it's the triumph of more complex covers over painfully simplistic ones--like my first cover, in fact! This issue also had other points I argued for: black pages and text wrap! Hopefully these changes stick around. 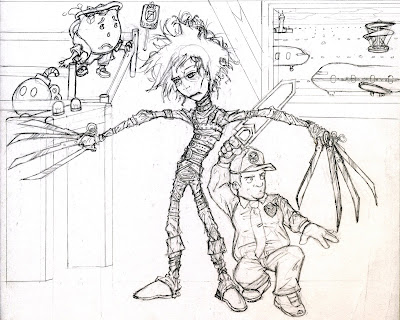 Now the final pencils! Everything's pretty much locked in and it just needs to be inked, cleaned up, and then colored! 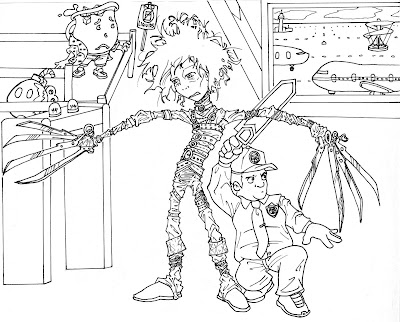 And after some inking and erasering it's finally ready to be sent off to that coloring dynamo, the incredible Chittenden! 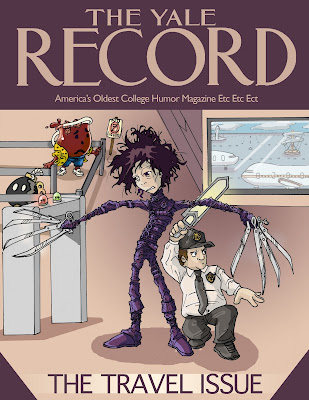 Here's our first colored draft (along with a mock-up of the final cover design).

Coloring was tricky because it was Thanksgiving break and everyone was scattered to their hometowns.

Over email we tried working as much out as possible, and this came out pretty well, considering. 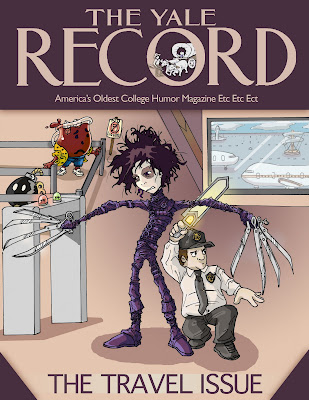 After a few notes, this is just about the final draft for colors. There were really small tweaks afterwards, which you can find here.

Note that this is where all those weird planes were off to: the Record logo's O.

And that's the Travel Issue's cover. 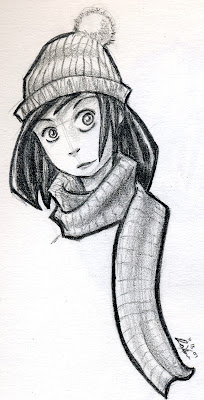 Speaking of flying by, I fly cross-country every vacation and break, and when there's no in-flight TV or a good movie (or turbulence), I draw.

So here are some drawings from my flight to California for Thanksgiving break.

First up is this girl I'd like to meet. 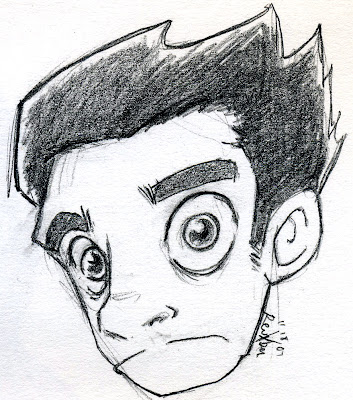 This one is the result of a desire to mimic the styles of Humberto Ramos and Francisco Herrera.

I find it tricky to discern between the two, but I enjoy their style so much, I wanted to try to emulate it.

So there you go.