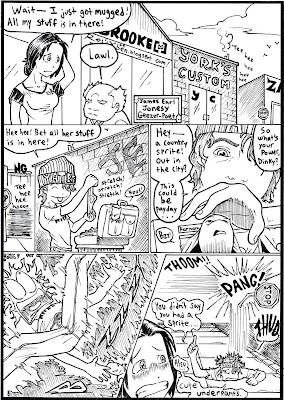 Fun Facts: I wanted to make this comic painful for me, and it worked--I almost cried drawing it. Really, I'm that good.

The secret stories: one name is the messenger I'm shooting, one never spoke a word to me until running for office and requesting my vote, one was the very first person to greet me after finishing my last final sophomore year but greeted me as a stranger this year, one had a disturbing discussion in my suite freshman year, and one is somewhat familiar yet estranged.

I kind of hope I won't be able to remember the full stories when I'm older.

You should see the cruelly jovial emails from Laurence Oliver Leslie.

Fun Facts: My first thought when I saw this morning's weather, Cool, it's snowing! My second thought, Dangit, my comic's weather is inaccurate! I totally did not see the weird fresh snowfall plus warm weather plus rain combination coming. Also, today's setting is JE's Taft library.

So as much as I lament not being able to publish on "Reuxsdays," ZLM is officially on Wednesdays this semester, which is more convenient anyway.

Final thought: This is my 10th YDN comic, but for some reason I need to hit 6 more to make staff, after being told I'd be staff by the end of last semester...fine. 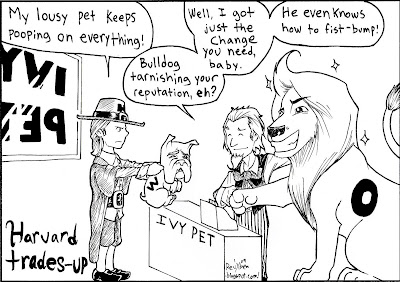 This is the third Sick Little Suicide, in which Harvard owns everything and the rest of the League's its pets. Take that, Yale.

If there were such a thing as stage fright for a visual artist, that's what I get whenever I publish in the YDN, especially this series, since most humans at Yale read the YDN. I used to get nervous earlier on with the Herald before I realized no one reads the Herald.

But I feel quite insecure(r) doing these suicides because it's printed gigantically right behind the cover. I hate imposing myself on people, and rather than hide out in a comics section where you have to look for me, the opinion section just blasts me right in your face...quite unnerving.

Ironically one of my fondest comicsing memories was YDN-related: I saw someone at first smiling then audibly chuckling while waiting in line at Commons and reading this. It warmed my pathetic little heart. Yes, I actually creeped my way near him to make sure it was my feces he was enjoying.

But that fool jack kelly always makes everybody smile. I wish I could be as funny as him. Ugh, I hate him. 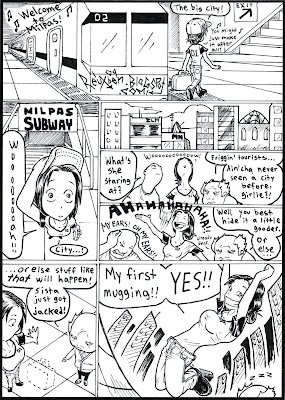 Fun Facts: Cardigans are for geezers. Facebook helps with posing. I got carried away with this new ruler I just got.

This comic was fun for practicing perspective and for throwing stupid(er) words into speech bubbles. 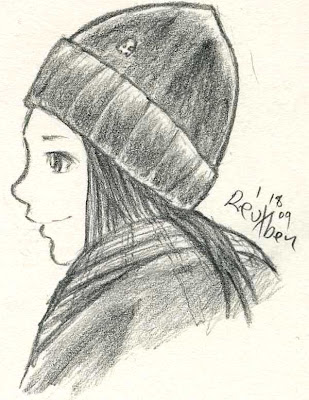 I went to a great rock show this past Sunday night, these are my sketches.

The show featured pretty much my top three favorite "Neat Yale Things" (on the left bar). These are, of course:
Great Caesar and the GoGetters
Richard Miron
The Sandy Gill Affair
As well as a band called Suitcase of Keys. They've got a really great song called "Fallen Leaves." The only downside to the lineup was that Great Caesar was short several GoGetters... 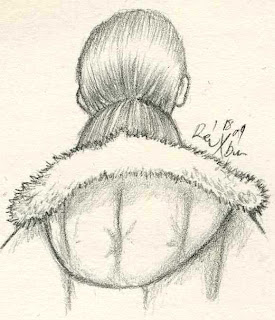 So it's always great whenever these guys perform but for once the audience is actually worth mentioning: the audience was one of the RUDEST groups of people ever assembled.

They seriously would not shut up! It's not like these were strangers on stage; these were people most in attendance knew somehow--why would you disrespect them by treating them like elevator music?

But in any case...I did sketch some of the nicer audience members, and even met someone who likes my artwork, which is always nice.

This girl had an interesting hat and bright red pants.

The first sketch was a girl in this cool flannel get-up with a beanie brooch or something.

The second sketch features a girl with an incredibly fluffy hood. It was huge.

Sidenote: man, The Sandy Gill Affair has some serious toe-tappers. 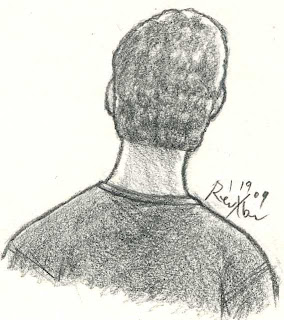 This is Mr. Miron, who weaved through the crowd before and after his set. I strained to hear him most of all because people just would not shut up. So frustrating.

He's playing a show in February, and I hope to make it over, so I can actually hear him this time, and maybe get a better sketch.

Although he did play THIS, which made my day!

The violinist was great, too, of course. 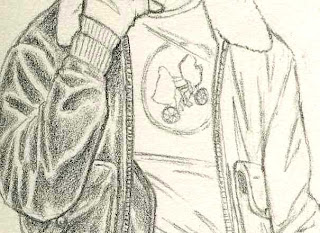 In conclusion, here's a Work-in-Progress of a drawing I've been working on. This fellow wasn't at the show, but he is the subject of my very first drawing of 2009, started on the 1st, and very near completion now.

Clue: it's terribly awkward whenever he's around, no fault of his, of course.*

*Technically, this means it could be anyone...even me.

Everybody, quick--don't shut up about inauguration day!

Fun Facts: If you know me, you know I love my sports and my politics. I use keyphrases in my head, such as "Zero Ethos," meaning "having no credibility." I have yet to encounter another chibi Harkness. Also, I had to look up who was in the Superbowl--did you know there are Cardinals in football?!

Well, I missed the cut off, but I kind of want this to run Wednesday anyway, since the people who it's meant for may very well be at the inauguration.

I may well just shoot for Wednesdays from now on, since it's actually more convenient, and was even my first choice last semester. In any case, here're the pencils, inks, and final.

I wonder why the first view of this post came from Harvard...? 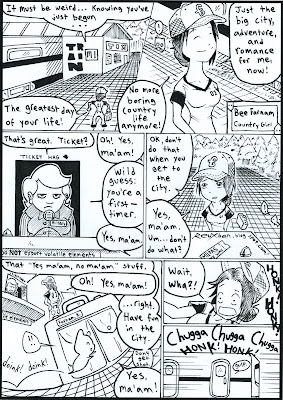 Shelving a sequel to this, Monsta Crash was inspired by Houston Calls' "Elephant and Castle" and The Cure's Dragon Hunter's Theme.

Fun Facts: Ticket Hag Hillary, named for the politician, not the Fresh Prince character, is Mr. James' sister. I lived in FB01 freshman year, and it was the greatest/saddest year of my life. An old drawing influenced Farnam's design. 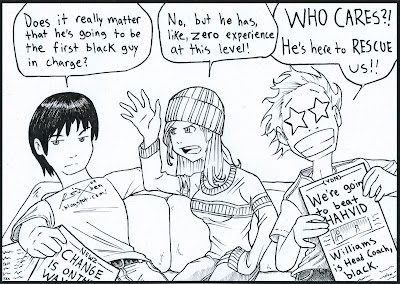 It's been a while, but here's another Sick Little Suicide for the Yale Daily News. This one is about change.

Easter Eggs: "Yale," "pika" in the Newz, "woot" in the YDN. Also, these character designs were based on four JE people, including a Republican who I'm sure wouldn't appreciate being associated with pro-Obama sentiments.

Fun Facts: Sports and politics are totally my passion. Also, this was supposed to run Tuesday, so it was way more timely.

Gosh, it's weird to see it printed so huge.

Nyao is light on her feet.

Fun Facts: Screaming louder does not help you prove your point any better.

So due to a bizarre series of events, we've had to postpone Tuesday's YDN comic, but on the bright side, that allowed me to scan the main steps in making a comic.

After pencils, I just ink the lines uniformly. I also begin indicating with pencil what I want to use hatching on for a grayish color, as well as what I want to be solid black.

Finally I set in heavier lines on what I want to stand out, and fill in shades. 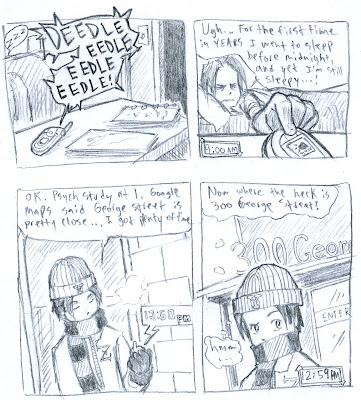 I saw this over break and decided I wanted to try doing an hourly comic for one day.

I was planning to do one on February 1st, but someone pointed out the site to me recently, which made me think to do a sort of test run today, plus I need to practice drawing Zero.

Since this is only a test, rather than work from my entire waking day, I set a midnight cut off because I actually do have some work to do...So here's a special Zero Like Me: Hourly Comic Special, based on a true story. 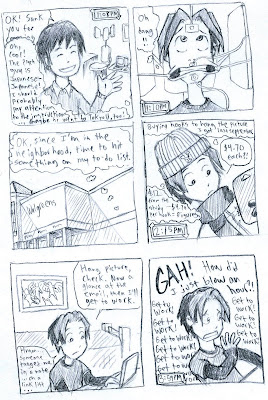 I have one of the Master's favorite pieces of art, I think; it's missing from our basement display of its sibling works, and he had the series in the Swing Basement, too, so I think he likes the series, too.

I picked the same one out at the beginning of Freshman Year during the Master's art rental period. 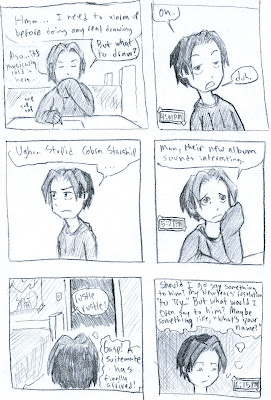 More on that in a second.

In the meantime, I'm working on a "real" ZLM.

I think it's due next week.

Oh, a note on how I made this: every hour of my day served as inspiration for one of these minicomics.

I started at 4pm and caught up by the 10pm episode. 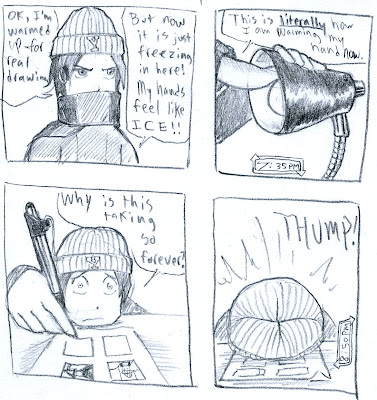 This cold-related stuff is true.

Someone turned off the heat during break, and I don't know how to turn it back on.

It is FREEZING! in here. 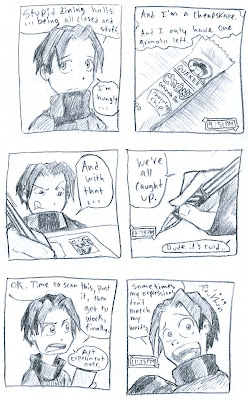 I probably shouldn't have done this hourly comic...I need to get to work.

I also have to work on my new Herald series, almost done with principal character design!

...ugh...and I have to Blue Book...it's a fun chore, but I don't know how much control I have anymore as a literature major.

I just want to draw.

And have warm hands. 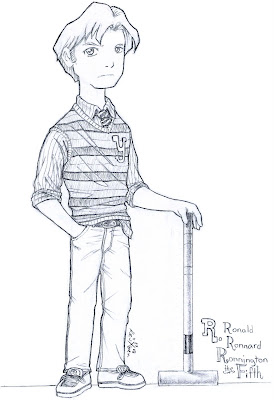 Just a few more hours before heading back to Yale! Also...I'm on a tumblr thing. [Update: I'm back, now with a photoshopped banner.]

Well, this is a profile shot of R. Ronald Ronnard Ronnington V, the snobbish roommate from Blue Type: Society, and latest Milk and Honey recruit.

I googled "preppy" stuff during Thanksgiving break to help draw this guy and found some pretty funny stuff out there.

Did you know Yale and Connecticut are the preppiest? 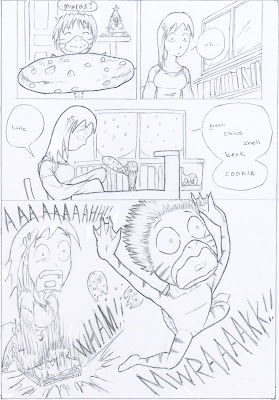 This is the finale for my Lit. 'nar final, a comic called Pangolin Falls.

Fun Facts: This page was fun to act out. I forgot to draw the action lines in the last panel!

By the time I finished this page, I was so exhausted, and had been drawing for over 24 hours straight, riding two cans of Monster.

But there was just one page left, and there was no getting around it.

Fortunately it was supposed to be ridiculously simple...like a victory lap, I guess. I even finished with enough time to do a cover. 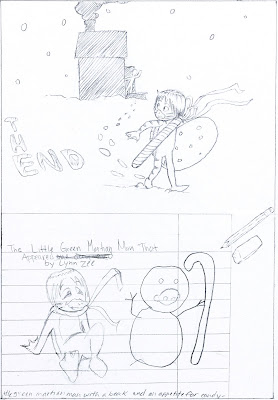 We were both wiped out from the marathon work, so no one noticed Lynn's absent final line, where she shouts from her house then is struck by a story idea.

Easter Eggs: The Kappa made off with loot from the reject mail pile before fleeing in terror.

Fun Facts: I thought it'd be cool if we could both draw, so we decided my collaborator ought not only to letter, but also draw for Lynn. Rock.

So that's Pangolin Falls. Finally back at Yale Wednesday! 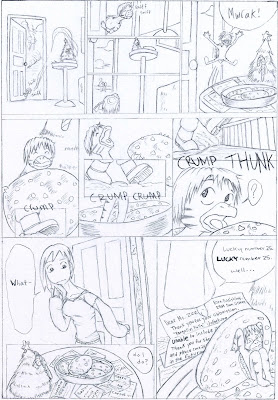 Fun Facts: This room is based on my collaborator's suite; one of this project's highlights was hanging out in Davenport all day/night/day, including an acting session for Lynn's door-opening sequence in the D'Port DMAC.

I got worried when the first few panels just wouldn't come out well, but the clock was ticking. 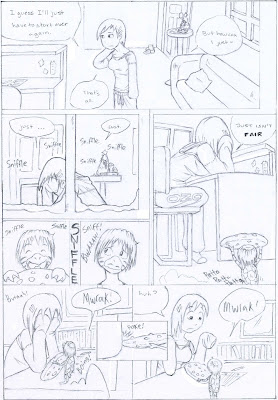 Visualizing difficult poses got easier with a partner to help out, rather than my photographing myself or staring at myself in a mirror.

Fun Facts: I'd hit my 24th hour at this point, so it became harder to keep Lynn on model. Shoulda dug into my Monster supply earlier...