When all your parents ever do is argue about money problems, this is freaking hilarious.

YALE: The BRAWLER: TURBO: PLUS+: INFINITE BREAKER
PREPARE FOR BATTLE! 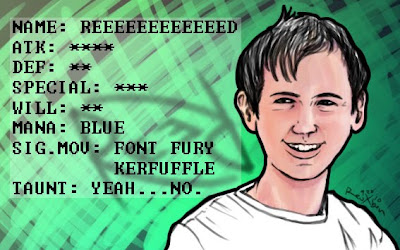 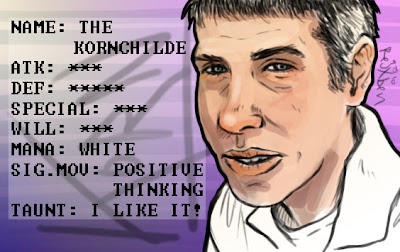 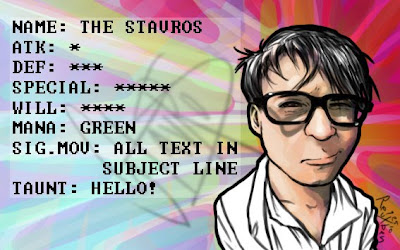 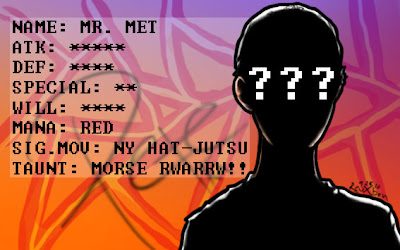 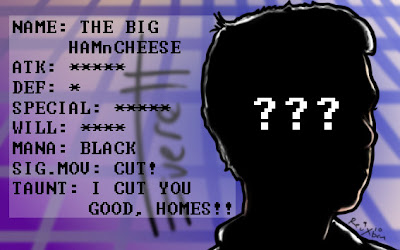 Speech bubbles is hecka underrated, yo.

Email ThisBlogThis!Share to TwitterShare to FacebookShare to Pinterest
Tags: Alive, Color, Digital, Making Of, Yale, YDN, Zero Like Me

Don't do school, stay in drugs.

Easter Eggs: "Yale" in panel 1. Are we breaking the fourth wall in panel 1? Tough to say...
Fun Facts: Today's setting is JE.

Baa: Had some technical difficulties earlier, so scanning inks and all that had to be delayed... How unprofessional. It breaks my heart, actually.

Ok, and with that, the introductory Buiikikaesu arc is over. And now we can all move on and rock on but you keep on singing that same song; let bygones be bygones, and you can go on and get the [hey] on. You and yo mama.

Email ThisBlogThis!Share to TwitterShare to FacebookShare to Pinterest
Tags: Alive, Color, Making Of, Yale, Zero Like Me

Fun Facts: Today's setting is JE. And it's probably worth repeating that today's guest star, Alexis Blight, is not based on a real person per se; her name comes from one of the rockin'est professors at Yale plus one of my old classmates, both being incredibly neat people of course, it just so happens they have cool, villainous-sounding names that I like. Coincidentally, it turns out this exact combination of names happens to be shared with a real person, apparently a college athlete, so...yeah. Sorry if you googled the real Alexis Blight and got stranded here.

Baa: I had to take a ballroom dance unit as a part of my high school's janky PE program (the highlight being bowling as the last unit of the year for students with A's) and I remember I had to waltz with a really, really stinky girl. And on top of that, she insisted on singing along to whatever annoying song was blasting in the gym. Why can't we be just like movies? Sigh...anything for an A in highschool, rite?

Email ThisBlogThis!Share to TwitterShare to FacebookShare to Pinterest
Tags: Alexis Blight, Alive, Color, Making Of, OriChars, Yale, Zero Like Me

Beware the law firm of Bwoing, Whap, and Klonk, trust me.

Fun Facts: AH! While drawing this, I played THIS on loop! YEAH!! What eerily perfect timing!

Baa: Hugs really throw me off. I dunno. The great Miron once wrote a song that perfectly captured how I feel about hugs, but alas, it's no longer up anymore--basically, hugs have sadly become severely underrated as a social interaction.

Don't just spring it on a body unless he's ready, is what I'm saying. Someone was kind enough to warn me before hugging me, which at least gave me a split second to think, Ok, how do I politely get out of this situa--*hugged*--ok, I guess we're hugging, then.

Fun Facts: Today's setting is in JE. Today's guest star is Alexis Blight. If I could make a kokuhaku myself, I think I kinda like coloring...

Baa: A music review today. I listened to Linkin Park's new album A Thousand Suns on loop while working on this, and you know what? I really like it. It's radically different from any of their prior albums, especially their first two (defining) albums Hybrid Theory and Meteora, but it actually still does feel Linkin Parky, believe it or not. Despite their efforts, there are actually still some rather strong traces of their old selves in this latest album, particularly from their previous album. "Faint," "Forgotten," "The Little Things Give You Away," (and especially) "What I've Done,"and more all feel subliminally echoed in Suns underneath their yet incredibly new sound.

Their last album, Minutes to Midnight was also a huge stylistic change-up, but I really didn't take to the album (and it blew my mind when I heard it was on various best-of lists). I've only listened to Minutes a few times and then only out of guilt for letting a long-playing gift gather dust. This latest change-up redefines Linkin Park in a refreshing and reinvigorating way. It makes all their old stuff sound a touch odd and even more dated than had been apparent after I revisited their first two albums after a long break from the band.

Listening to the new album and then listening to their first two is like returning to see your grandparents as an adult only to realize that the quaint, folksy mannerisms you remember of them from childhood visits were in fact actually racist diatribes. Ok, not really, but you get the idea. The old stuff is whack. A Thousand Suns has permanently changed my perspective on Linkin Park as well as its old, once-endearing work.

My Chemical Romance, my favorite band (ok, maybe a hair behind Motion City Soundtrack?), has been explicitly making the very band-redefining promises that Linkin Park did about Minutes and most notably Suns, but I couldn't fathom what that promise meant. Now I have seen radical change twice-over via Linkin Park (their latest twist being for the better), so now I can grasp MCR's promise to make their old, classic material feel obsolete. If they can similarly innovate, I cannot wait to hear their fourth album. My only trepidation lies in losing my present love for Three Cheers and Bullets.

Through Linkin Park, I've seen that positive redefinition can be done by a band I enjoy and am already quite familiar with, so now all eyes (well...mine) are on MCR to see what they do and how they do.

Email ThisBlogThis!Share to TwitterShare to FacebookShare to Pinterest
Tags: Alexis Blight, Alive, Color, Making Of, OriChars, Yale, Zero Like Me

Note to self, draw faster.

Fun Facts: Today's setting is between Branford and JE. This is my first time digitally inking ZLM because my pens are just about dead, and so now was as good a time as any to give it a try. Today's guest star is Alexis Blight...no relation to the athlete.

Baa: The YDN asked me if I'd be up for contributing more comics, so I think I'm back in the print edition on Tuesdays. I started ZLM on Tuesdays nearly two years ago, actually, so we've come full circle now, isn't that neat? Since I'm submitting as an alumnus, does that mean I'm technically syndicated my first year out of college? Take that, actual-syndicate-editor-who-I-unwittingly-met-at-Comic-Con. Ok, fine, not really.

Burying the lede: If you're a Yalie visiting for the first time, hello. This comic started in the YDN in October 2008 and continues online as a personal project after I graduated in May 2010. Whatever runs in the YDN is likely to be lagging a bit behind what's currently posted here on this site, and there's always the Zero Like Me archives, so there you go. Happy to be your study break. Neat.

Fun Facts: You can be a method actor by actually being what you intend to portray in a role in preparation for that role, but is there method comicsing? I've got a cold, so my nose is streaming boogers right now and my eyes get super watery after I sneeze, making for some solid first-hand experience with all this boogery, teary stuff. So maybe that's method, man.

Baa: I used to be so crazily not into rap, but ever since college, my appreciation for rap has grown. But rock's still number one, though.

Email ThisBlogThis!Share to TwitterShare to FacebookShare to Pinterest
Tags: Alive, Color, Making Of, Yale, YDN, Zero Like Me

Zero Like Me [Alive] #114:
Buiikikaesu Pt.3: Complexion
<- Previous Comic...Next Comic ->
-First Comic-
Easter Eggs: "Yale" in panel 2. Four of the five things I never left my dorm without, plus my drawing lamp and a jack kelly post-it, in panel 1. Also in panel 1, that little Batman keychain trinket thing I got with my ticket when I saw Dark Knight in a theater in Japan.

Fun Facts: I usually only break exterior panels for Herald April Fools' specials, but it's a webcomic, so we're getting wacky...and hey, color. I think we're gonna do more spot coloring.

Baa: One junior year afternoon, I needed to get into Farnam so I asked some obviously fresh man to swipe me in. The blonde/blue dude hesitated upon seeing my positively Amadou-Diallo-like visage, "Uh, I'm a professor and I don't think our swipes work on freshman dorms." I gave the baby-faced youngster an unamused look. "Ok, I'll try," he said, and -surprise- swiped right in to the [read: his] dorm. Now, am I racist for assuming he profiled me? Maybe. But whatever. Thanks for helping out a beaner in need, sir, I salute you.

Email ThisBlogThis!Share to TwitterShare to FacebookShare to Pinterest
Tags: Alive, Color, Making Of, Race, Yale, Zero Like Me

What Emily Dickinson did for dashes, I will do for ellipses.

Fun Facts: Today's setting is right outside of Branford College. The note they're talking about is featured here.

Baa: One night I slipped on some black ice and slashed up my wrist and knee in the fall. The damaged areas hurt for weeks on end and I even had some light scarring, so all the while it looked like I tried to slit my wrist and failed horribly. Hilarious.

Oh, and hey, thanks for tuning in so heartily to the premiere over the weekend, by the way--you all rock. I will do my best to keep you entertained. I'm grateful to be your study break, or to distract you from your cubicle, and/or senate seat (yeah, US Senate computer, I see you wasting time here). Don't worry, I won't tell anyone. Removies have to stick together.

All right, let's see how we get ourselves out of this one... 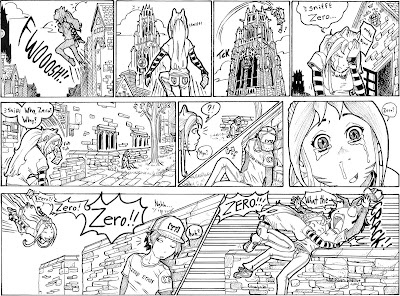 Hey there, you look familiar...
Zero Like Me [Alive] #112:
Buiikikaesu Pt.1: Friendship
<- Previous Comic...Next Comic ->
-First Comic-
Easter Eggs: "Yale" in panel 9. Dedication to Professor Maxwell (my thesis advisor, and many times my professor) in panel 5, to Mrs. Lang (my AP physics teacher) in 7, to Mrs. Suarez (my very first teacher) in 10. Callback to my very first ZLM punchline. Guest starring Harkness Tower! 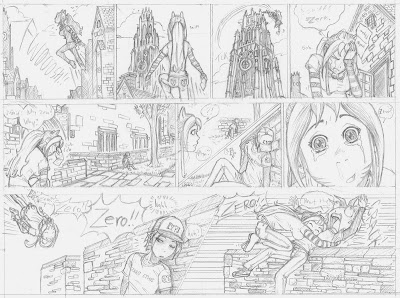 Fun Facts: Today's setting is right between JE and Branford. To help differentiate between the college period of ZLM and this new era, I'm nicknaming the new one "Zero Like Me [Alive]." Also, the last ZLM from college helps set the stage for this new run.

Baa: Man, my new editor rocks--no more pestering about getting comics turned in at arbitrarily earlier and earlier hours! But seriously, it's pretty weird and pretty neat not having a boss.

All right, let's grow some beards, my fellow has-beens! 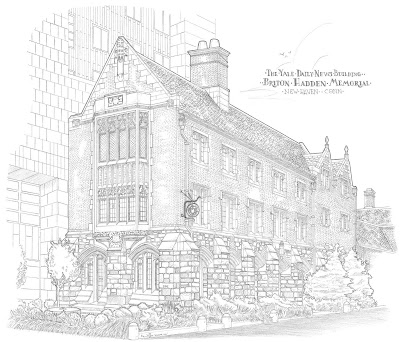 So my crack team of Bolivian lawyers and Canadian phrenologists advised me against premiering on a Wednesday, so please enjoy this commission instead.

This is actually a special favor for some d00ds in New Haven. But in any case, if you would like to help me out of a rough spot and commi$$ion a drawing, please let me know via email. Ask about the Yale Discount*!
*Bones pay double. Keys quadruple. Teehee.

Okay, Friday's when spit gets real. See you then for an extra-packed comic.

By the way, hope you had a happy ODC, Yalies. Remember: only chumps and socially well-adjusted people eat at colleges on weekdays!