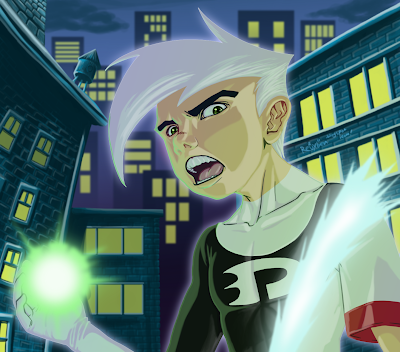 I've done over 600 posts by now, but I'm really tired of my 7th post, the one with that Danny Phantom drawing, still getting a good chunk of traffic. So in the hopes that random googlers will stop going to that page, which has not aged gracefully, I decided to redo that drawing of Danny Phantom. 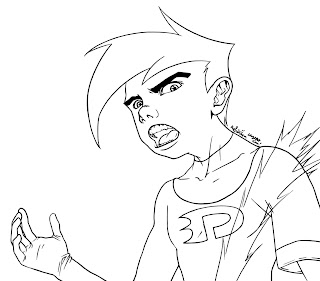 And speaking of Danny Phantom, I've heard great things about that show, and I appreciate its resilient, Zim-like cult following, but to be honest I've never really been able to get into Danny Phantom. The casting was great--the Black Best Friend was even voiced by Vince from Recess! But the stories just never quite grabbed me. I didn't love the Butch Hartman style and to be frank, the theme song sucked hardcore, but the thing that really drove me off of the show was the nauseating plasma-ish color scheme, all those sickly faint greens and purples! But to each his own.

If you feel inclined to search for black and white coloring pages for Danny Phantom, my dear random googlers, I hope you stop by this page rather than that old one. And I hope I get sick of this page soon, when I feel I can pwn this. 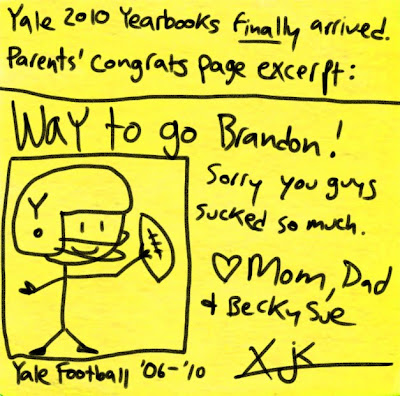 note to self #25: yarbook pt.1 - foosball
Oh Snapple, it's time for note to self by jack kelly. Yesterday, TEN MONTHS after graduation, Yale 2010 yearbooks (The Yale Banner) finally arrived in the mail, chock-full of missing people, typographical errors, and blurry or pixelated photography. But at the end of the tome are some dedications and congratulatory messages from parents and family of graduates. jack kelly asked the Yale Banner if he could reproduce some of those oftentimes quite personal messages, and shockingly they agreed! So he compiled some into a series he's calling the "yarbook," starting with the above ode to horrific footballing. 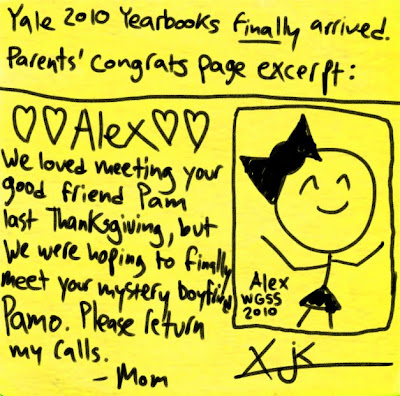 note to self #26: yarbook pt.2 - pam
I don't think they are speaking anymore. Not unless there's a lawyer present. Speaking of which... 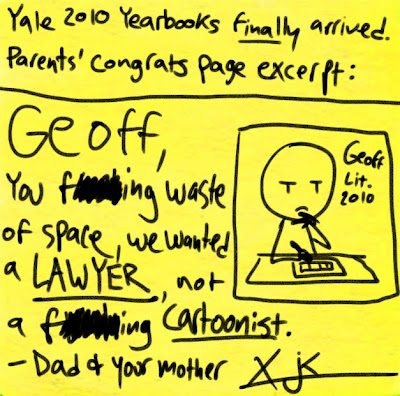 note to self #27: yarbook pt.3 - geoff
I can't imagine why anyone would say/write/print such a thing! That poor Geoff must be crushed... 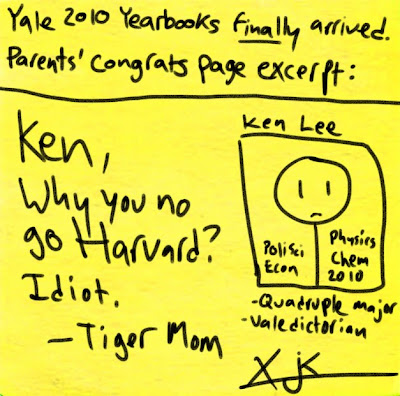 note to self #28: yarbook pt.4 - tiger
Man, it's gotta suck to have such a loser for a kid! Good thing I have no idea what that's like!

Email ThisBlogThis!Share to TwitterShare to FacebookShare to Pinterest
Tags: Alive, Animorphs, Birthday, Holiday, Making Of, Video, YDN, Zero Like Me 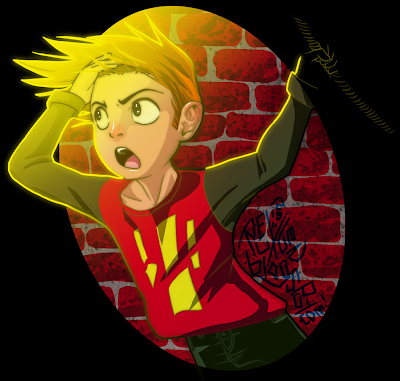 Unless you're the JET Program. In which case, I'm all yours.

The FBI paperwork's long been filled and will finally mail by Monday! 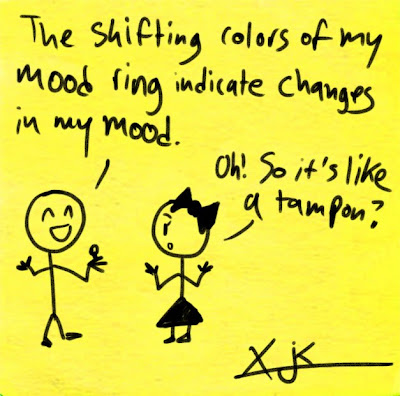 note to self #21: moodring
Like a used-car tent sale, jack kelly returns with his series note to self. Up first is something that no good citizen should tolerate. Not now, and not any time of the month! 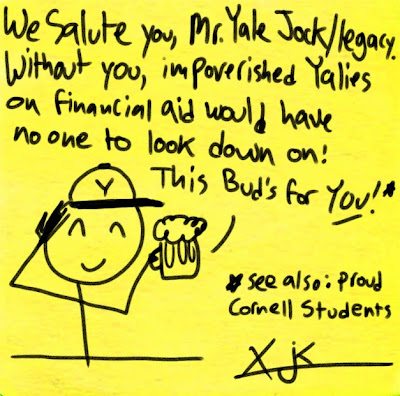 note to self #22: real men of genius
Aren't you clever, jack kelly, ripping off a respected and beloved marketing campaign geared at perpetuating the tolerance of a substance that has been responsible for so many deaths, accidental births, and everything violent and destructive in between! I oughtta buy you a Foster's, just to teach you a lesson.

And on top of that, you perpetuate the completely unfair assessment that Yale jocks and/or legacies are not as vital to Yale as normal Yalies. Ok, maybe legacies don't pull their weight to keep the electricity on at Yale, but targeting jocks?! What a jerk! I know I speak for the graduates of the classes of 1702 through 2010 when I assert that the reason everybody wants to go to Yale is for the sheer and nigh-immortal international prestige of its athletics and that the academic stuff is just kind of a fringe benefit of enrollment. Ugh, what an idiot. And yes, by "jock," I know you mean all Yale athletes as opposed to just the usual oblong-ball-touching suspects, primarily because of that ugly, longstanding stereotype of the Yale tennis team being chock-full of morons, for instance. And don't even get me started on the cruel things real Yalies say about the track team, assuming running's a sport.

Oh, yeah, and real classy throwing Cornell in there as an afterthought. Assuming Cornell's in the Ivy League. 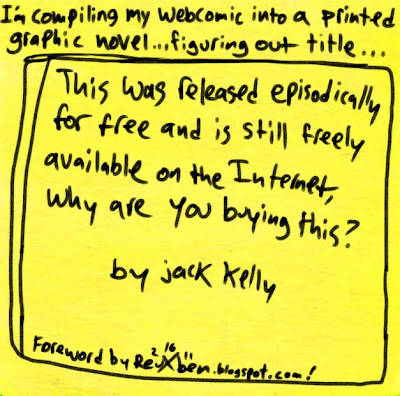 note to self #23: worst seller
Yeah, I'd buy your book jack kelly, like a thousand copies, and then I'd totally burn them! And then every time they restock, I'd buy those new copies and burn those, too. That'll teach you, jack kelly, you smarmy bat turd! 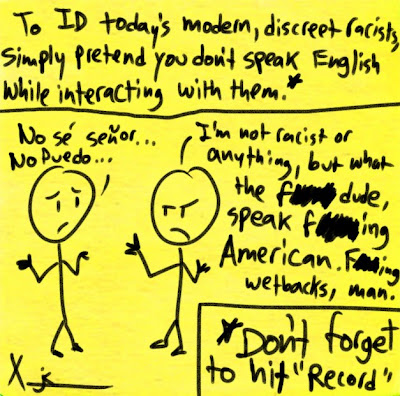 note to self #24: american
I knew it, jack kelly, you ARE a racist! How dare you use the phrase "wetback" in a comic. I don't even have to see the context, I know automatically that makes you a racist. You racist.

Eat your heart out, Banksy, or whoevs.

Email ThisBlogThis!Share to TwitterShare to FacebookShare to Pinterest
Tags: Alive, Celebrities, Graffiti, Holiday, Making Of, Valentine's Day, Zero Like Me

Hate it when that happens.

Email ThisBlogThis!Share to TwitterShare to FacebookShare to Pinterest
Tags: Alive, Making Of, Richie, Video, Yale, Zero Like Me 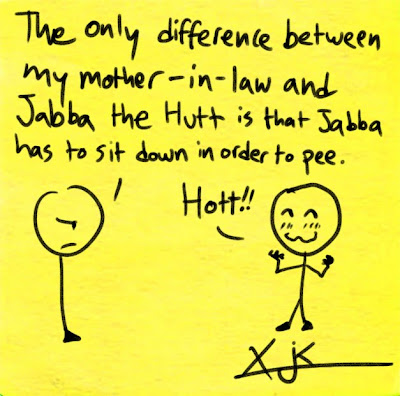 note to self #17: jabba
That yellow menace is back--it's jack kelly's note to self. Up first is proof positive jack kelly's an insufferable poser--he's clearly never even seen Star Trek before and is just relying on buzzwords he's heard from TV actors playing nerds (y'know, like on Attack of the Show). What a freaking TARDIS, amirite Dr. Kirk? 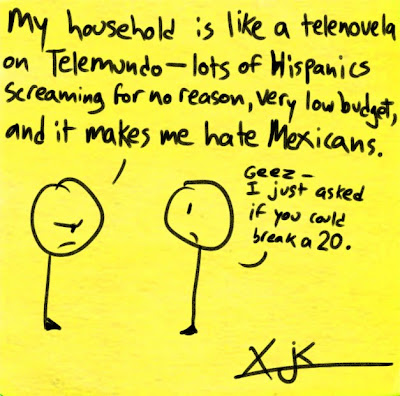 note to self #18: telemundo
Up next is proof positive that that yellow-black-American, or whatever jack kelly socially-constructs himself as, is nothing more than a filthy racist. 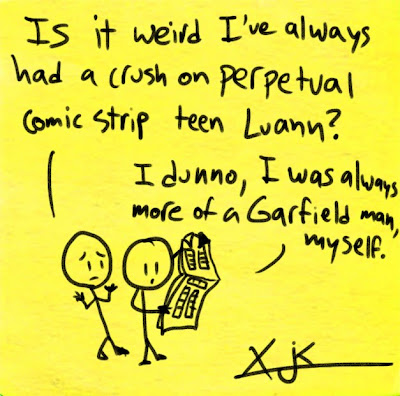 note to self #19: comic strips
When it rains it pours, and judging by this comic, jack kelly wants to make it rain on all the wrong people and in all the wrong ways. Maybe jack kelly's first name is actually "R." 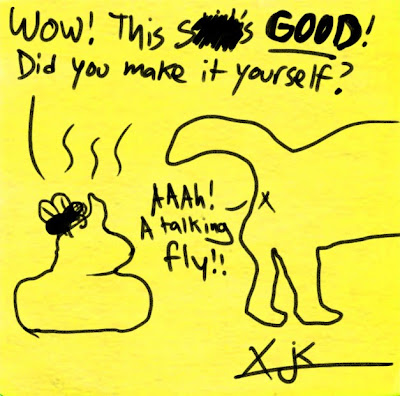 note to self #20: still fly
My eyes already want to vomit whenever I see a jack kelly "comic" anyway, but this one is just beyond the pale. Meaning the barf is brimming past my pukebucket's lip. 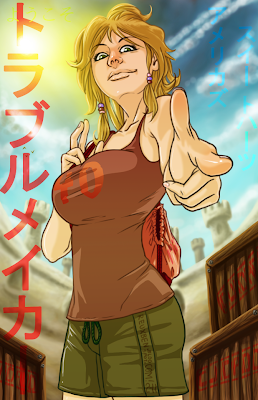 Alex Doonesbury from Doonesbury. Happy 40th!
The late 60s has to be my favorite period in Yale history, when you could find The Trudeau, W. Bush, Meryl Streep, and even Harvoid roomies Tommy Lee Jones and Al Gore all intermingling in the infamous 29-29 Yale-Harvard Game of 1968.

Easter Eggs: Hints of the MIT logo on the backpack. The red text is from the Red Album I bought in Japan, for "Troublemaker," and the hidden text is in part from Fall Out Boy's "America's Suitehearts," which coincidentally is (apparently) about Yale drop-out Cheney and Yale legacy George W. Bush '68, whom The Trudeau '70 worked with on the Davenport College social committee. I thought these sloganisms worked well with Alex and The Trudeau, so I plugged them in for some flair. 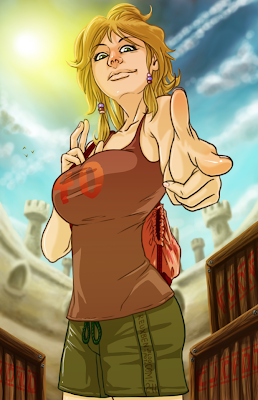 Fun Facts: Kinda wanna start embracing digital--combining cel shading and painting. Lots of fun. Speaking of fun, I was fortunate enough to meet The Trudeau twice in one day. And for all his reclusive mystique, he is actually one of the most charming, engaging, and warm humans I've ever met. And I've met Santa Claus. 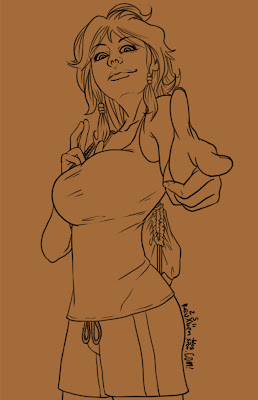 I spoke to The Trudeau about my encounter with our mutual acquaintance, one Howard Dean '68, and learned some fun little stories from their days at Yale. To his credit, Howard Dean is also a warm, gregarious guy, too (his co-professor, though...kinda intense). When I snuck into Howard Dean's seminar during shopping period, the room of prospective students had a good chortle when Howard Dean light-heartedly derided the Yale Daily News for some reason, meanwhile the just-replaced Editor-in-Chief was sitting no more than two feet away! 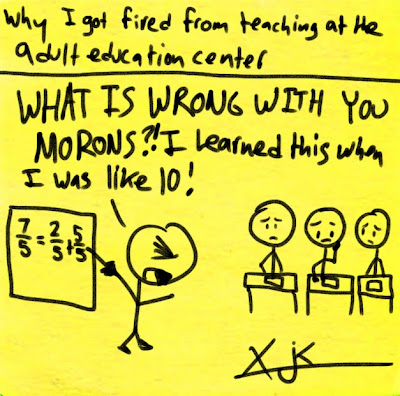 note to self #13: adult education
This week's episode of note to self by jack kelly is called "room4squares," which, statistically speaking, must make sense to at least one person out there...anyway, next time you mouth off, jack kelly, try to be coherent. 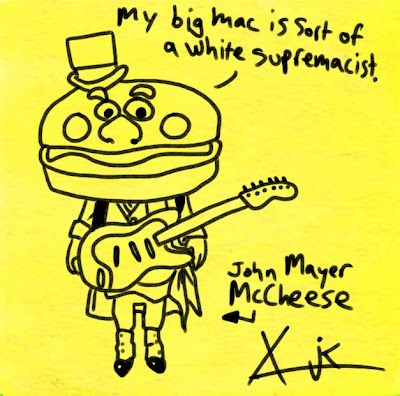 note to self #14: john mayer mccheese
Just what we need, a three-way suing opportunity. 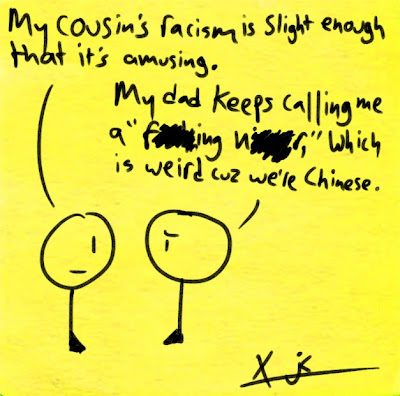 note to self #15: family racism
Racism is only cute when spouted from babies and geriatrics, but mostly just from baby geriatrics. 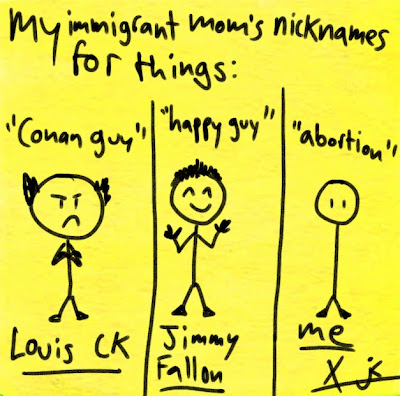 All right, it's my turn on Friday, jack kelly, so prepare to have the black slapped off your yellow.