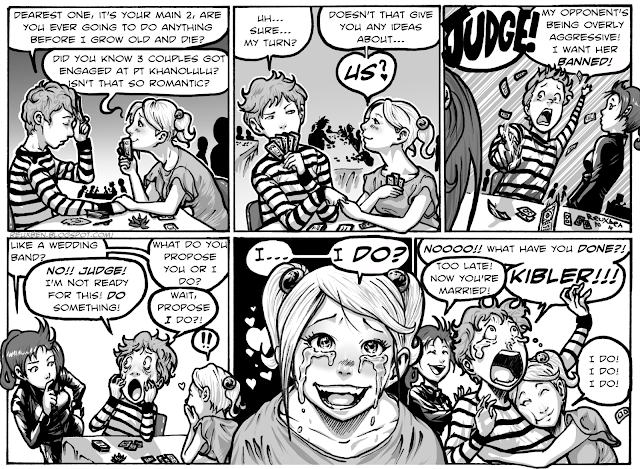 The file says this is our seventh Fear, but pretty sure this is actually the sixth since the first one was just internal. I posted the previous one out of order here. 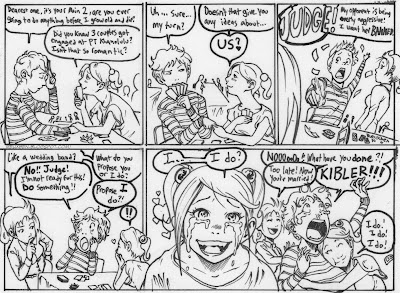 Fun Facts: This comic came from the story that multiple people did proposals at PT Khans of Tarkir, in Honolulu. Also discovered Brian Kibler used to go to the same LCS I did, but only while I was across the country at college. 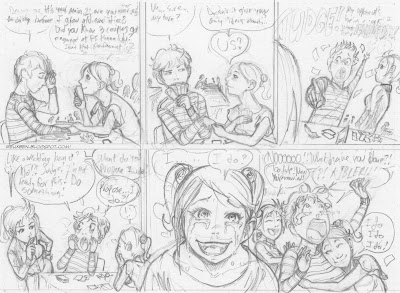 Easter Eggs: Yolo in dude's hair; red mana in girl's hair; Black Lotus on the table; Luffy, Goku, Astro Boy, and Bart Simpson playing in the background. Sol Ring ambiguously in the air. Also, I believe the judge here was inspired by a judge I saw on coverage--Irish maybe?--I imagine she has red (literal, not orange) hair. 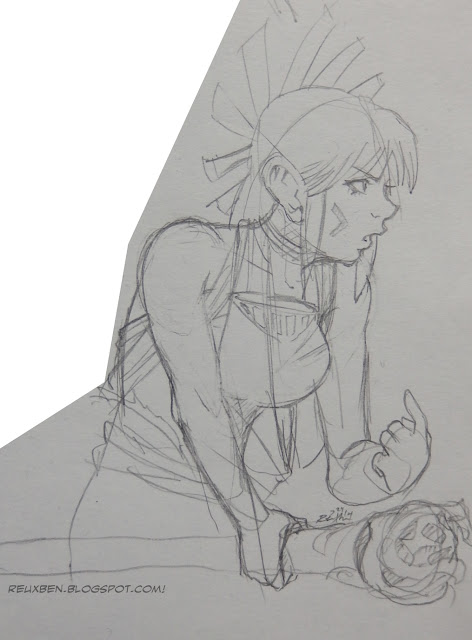 The idea was to get a tough, warrior-like design because of course they give no art direction and expect psychictry and that's what the pig entrails told me to draw and yeah. 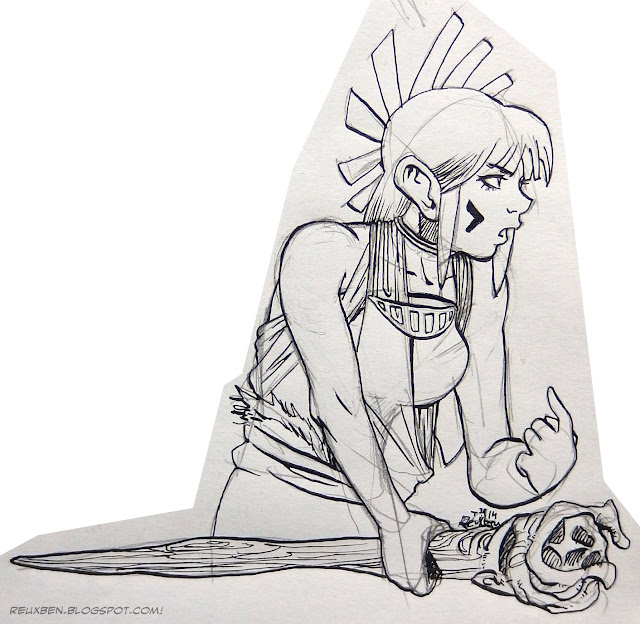 Sometimes I come across art I don't remember the story behind. This one, I finally figured out.

It was a practice sketch for this piece, and then later became inking practice when I got my G-Pen. Don't usually ink stuff for kicks, but had to get practice with the pen to prep for the comic.

Everything's prep for something isn't it? 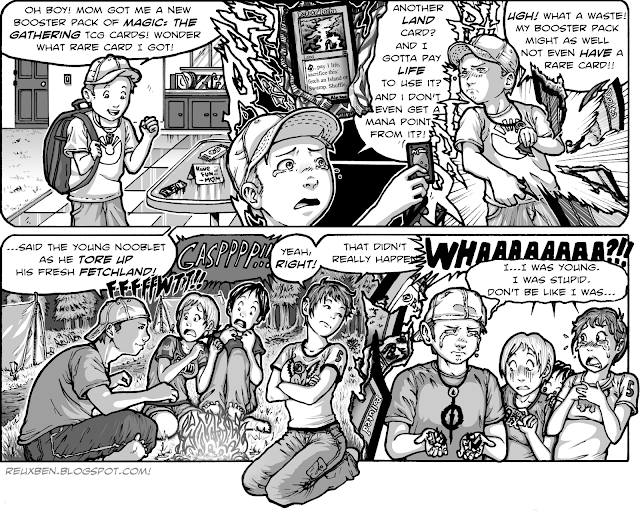 Our fourth Fear, and it even stayed up, nice. This also got some neat JP response, too, though as far as I know they never released JP versions of my stuff as I'd been told they would. In any case, a decent accomplishment cuz it was in English, after all. Ultimately proudest of this one, and it even beat #SaitoWayfinder numbers, cool beans. 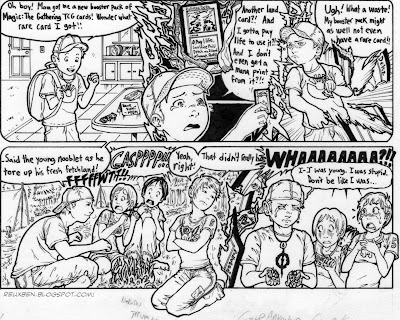 Fun Facts: This was inspired by true events. I remember feeling these exact feelings in panel 2, and eventually gave my OnslaughtDelta away...maybe I sold it at the Champions of Kamigawaprerelease? Pretty sure I traded it away to someone who doesn't even play anymore...Might have gotten a cool-looking swamp for it at best. 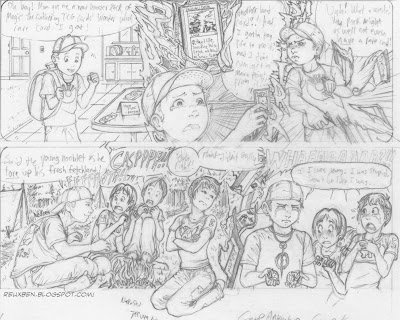 I try to embed as many depressing nuggets into my characters as possible, and this guy's secret story is that he has no friends so his mom has to buy him cards. She doesn't really understand Magic--nor does he, to be frank--but she knows that the packs contribute to the game and make her boy happy, so she buys him a pack or two when she can, and he's just thrilled. She also gives him some cookies to distract him from the fact that he spends all his time alone playing a game meant for two or more people. She doesn't know how to solve this, but figures she's helping by keeping him occupied--she can't be there to play with him because she's got to work. She's just hoping it works out for him. He's now living off the fumes of an old story to entertain people who don't actually care, but need to pass the time. lol 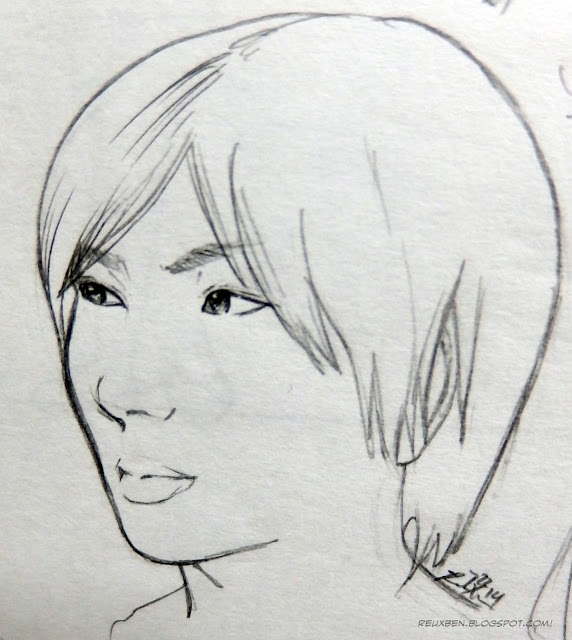 Sketch of Yamaken, who I got to play right before he Top 8'd PT Origins (you're welcome). It was some random weekday Standard event for me but he was testing for the PT.

I actually beat him, too! With a card he had to read! So pumped!
To be fair, in my core-black deck, nobody ever knows what I dropped face-down.

He plays just insanely neatly, like he knows exactly to the twitch what to do at all times, but with careful thought--other JP players just jam lightning moves confidently, but he doesn't hide that he thinks, and you have little doubt he just made the best move he could.

Yes, he won the match, but that's not the point. 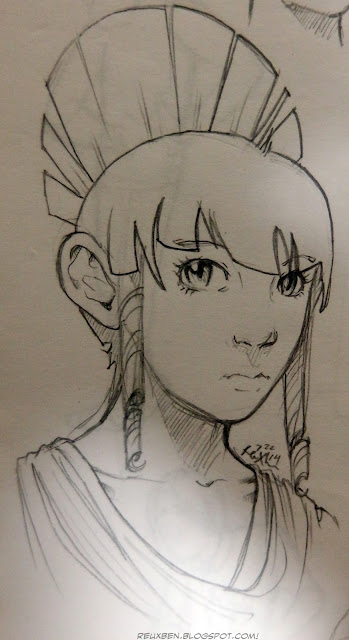 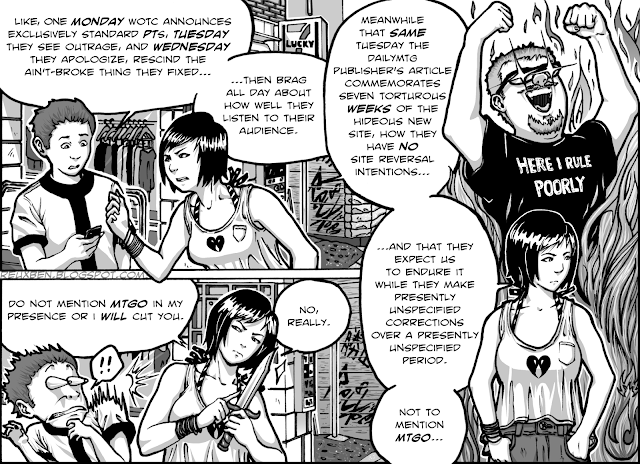 Our third Fear, this one I discovered got cut after publication. I cleared the script and everything and it went to print and then disappeared. Curious. I wanted Magic to have an actual satirical voice in comics, rather than just toothless "Yay, Magic is fun and aren't players quirky" stuff, as I explained a million times, to which I received approval. 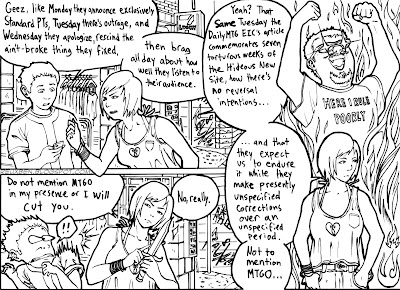 Fun Facts: I don't play Magic Online, but I imagine their frustrations are what I feel with the website--this was when they redesigned it into the current version with all the panels and stuff, and abandoned the old apparently hideous, but absolutely functional classic site. I used to visit the site daily, but now only with severe reluctance and generally only if I have a specific link to the page I'm looking for. Hate having to search for anything on the site, too, just asking for heart ache. Anyway, this comic came from a sequence of extremely poorly-received news from WotC, and a comically fast reversal that made it feel like if they really want to, they can make stuff happen, which is disheartening given the stuff that really ought to change. Note they hadn't announced the 2-block paradigm yet. 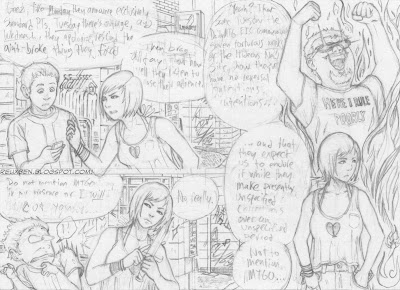 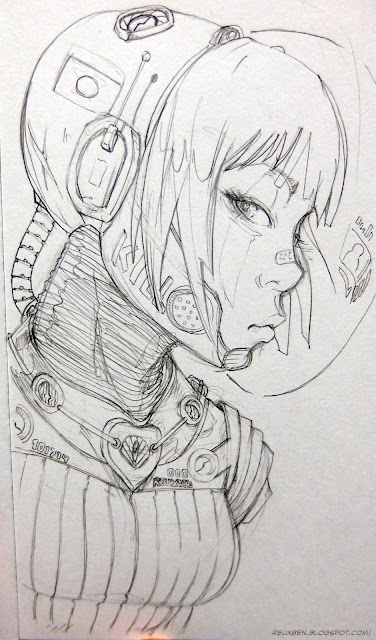 Hey, found these old pencils, too.

Yes! It's raining. Just what I needed. So underrated. 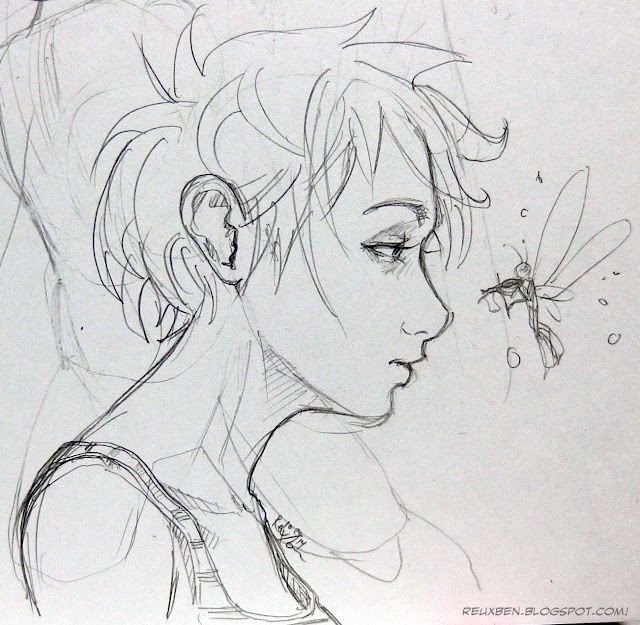 Found the pencils to that one bugsy piece, Malone.

Going to try to listen to some rap while updating today...don't like rap but am trying to give it a chance, so far this one is pretty solid. 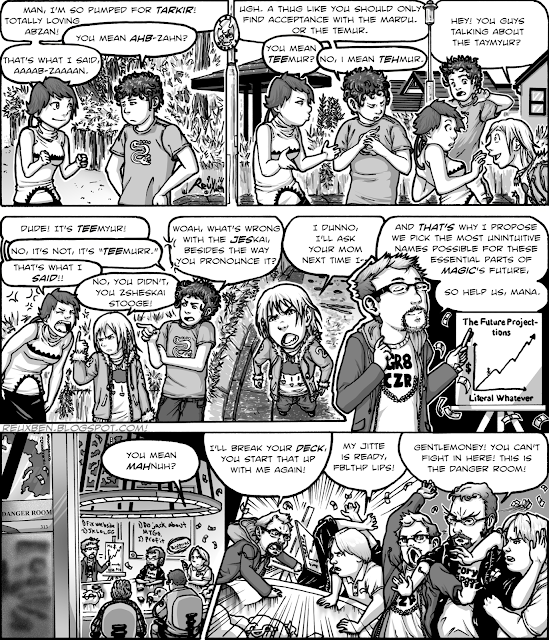 Another Fear comic from centuries ago, but for simplicity's sake, let's just call this the second one. I believe Khans of Tarkir just hit da streetzsz at this point. I knew the name stuff would be a promble, to use the Yale term, and it's 2016 now, and still remains true! 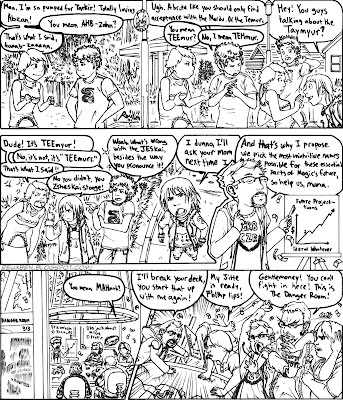 Fun Facts: I had drawn up an alternate comic about Mark Rosewater's announcement about the new 2-Block Paradigm, but it got cut. I had all these great reference photos I took from a park near where I used to live that I wanted to use, so this comic was actually all an elaborate excuse to draw that gazebo thing. I later realized this would be a fun opportunity to draw some R&Ders, too, like those old Looney Tunes, where there're all those movie stars in the background, and you're like, Hey, it's that guy. Like that. I chose each person based on their sort of public personality (and whether they were on the KTK team). Though we are playing on the mythology of the legendary R&D debates. I had to do some reaching for some pronunciations, but most are real that I expected to hear, and in fact did. Including Zsheskai...ew. 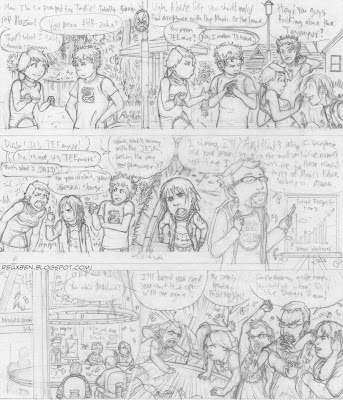 Easter Eggs: I modeled each person after a clan, so the girl has Anafenza's do and symbology, Sultai guy has a Silver Serpents shirt and snaky hair, feral Temur Lad has fur trim and a raining emotion shirt (he's wearing the comic's release number, two). The external Danger Room stuff is taken from that 80k Words article, though the internal is the actual War Room. I don't know if it's constantly raining money inside R&D, but it's a funny image, isn't it? Anyway, as for the R&D members, everyone's go-to is MaRo, so I wanted to dig a little deeper, though you'll still see a flannel shirt. There's a Greenbay'd giant, which is Matt Tabak, who seems like he'd be listening mostly since he is essentially Chief Judgestice Supreme; but there's also Zac Hill in a Great Caesar shirt, who seems like he would be leading knowledge-sharing; Shawn Main, who seems like he'd be the neutral guy; and Ken Nagle, who seems like he'd be more green-ish and ready to flex. I really wanted to draw Aaron Forsythe, but reasoned he likely would not be in the room here. The Jitte and Fblthp stuff is a reference to other difficult pronunciations, but the hardest line to catch is probably the break your deck one, a reference to an old tape recording I had of Who's on First, but mixed with this goofy (language warning) song and the slang for "breaking" in Magic.

This was pretty fun to draw. And obviously this is just a comic; realistically, I'm sure they actually settle all debates via some kind of rock-paper-scissors system. Like Magic, for instance. 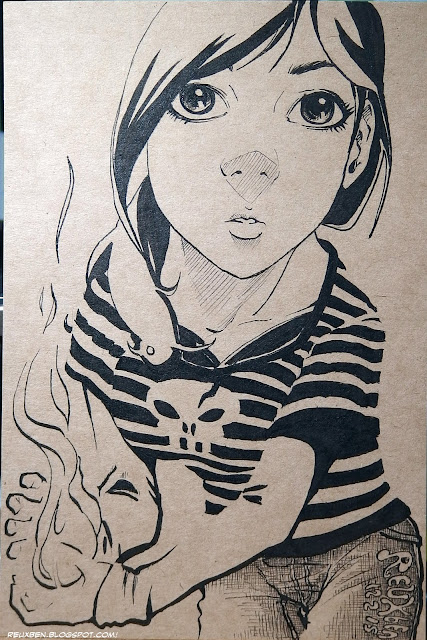 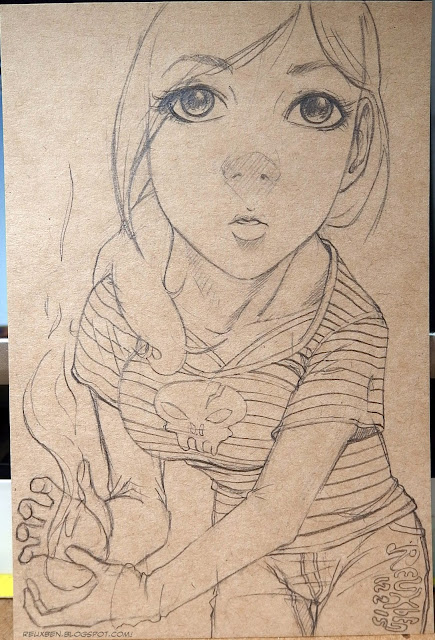 Wanted to do something with negative space and stripes.