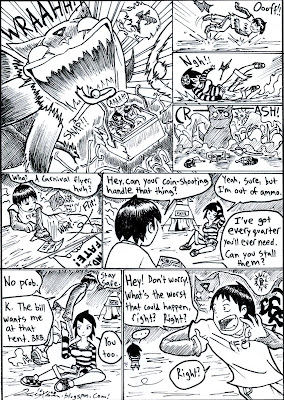 This one's our annual "scary" comic.

Fun Facts: I panicked on creature design, which I scrambled through before my sitcom feedback meeting yesterday. While lettering the page, I thought, "Man, it's pretty lucky how in my 1.5 years comicsing, I haven't typo'd." Just as I thought that, I typo'd. So the printed version has a typo.

And back in black...it's jack kelly with "birthday." 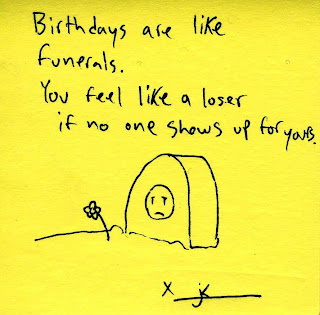 Fun Facts: She was drunk. So was my roommate. They wanted our room for a while. I wanted to continue writing my paper in peace, as I had before they stumbled in. He tried to appeal to me to leave--"She isn't an athlete; she got in on brains." He sensed the statement was inappropriate. She tried to appeal to me to leave, offering at first to help me with my paper later. Then another offer. She and I were both shocked at the latter. The room stifled us with discomfort for a silent minute or two.

I focused on my writing and then felt something firm on my left cheek; I couldn't even tell you who she was, what she looked like--but that was it; I couldn't believe it. I wanted to cry, scream, disappear. Even she looked plagued over what just happened. My roommate realized the moment's gravity on me. They sobered up instantly and left. No one said a word.

They probably don't remember any of it. But I do.

This is a development sketch of Will Cutler.

I'm in this great class on writing half hour comedies for TV, where we'll pitch an original show and develop it to a full pilot script. So this is the main character from my show, "Blue Type: Society."

Fun facts: Admission to the class was based on a writing sample, and I used THIS as mine! 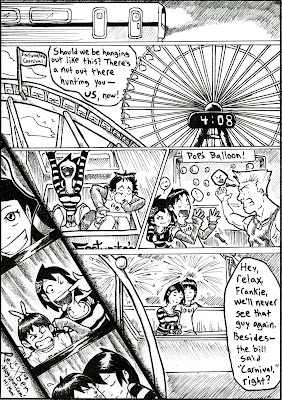 So much mushier originally.

Fun Facts: I managed this after little sleep all week, on the same day as a math midterm and finishing a paper, leaving me 1 hour's sleep before a Spanish test this morning! Haven't sipped Monster in a while, so I'm all shaky.

And jack kelly got the week off. Goodness knows he works way too hard... 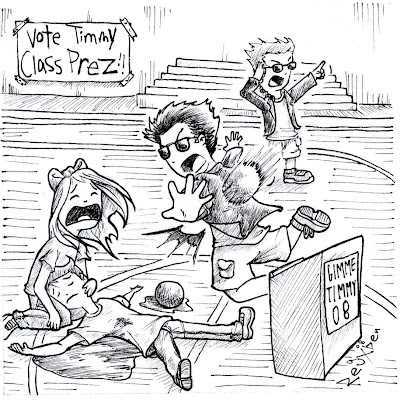 This is my piece for the Yale Record for their political or "Vote Early, Vote Often Issue."

This is an important issue because it unveils our new 1913-inspired format. I couldn't say much about it in the planning stages since we were only dealing with the hypothetical, but now that we can look at a new issue in the new format, I guess it works, but there are a bunch of minor ticks that really get distracting. And as I feared, there is a stench in the air of "ripping off" the Harvard Lampoon. Yes we're older, and yes we're both based on the same magazine, Punch, but the Lampoon has retained its old-time feel for a long time, including during the Record's void years. As a result it feels as if the Lampoon owns these sorts of things. And it feels like we're ripping them off.

A minor complaint is the way too obvious parallel layouts of pages 7, 9, 11, and 19. They're the same exact layout! Did nobody notice this? Feels soooo bland. And the name thing...it's just stupid and pointless. Let's be real. It achieves nothing.

A bigger complaint is the use of photography. In our initial discussions over this, I remarked specifically that art is our trademark. Photos look cheap (see Temptations) and feel pedestrian since just anybody can take a picture, and most other college humor magazines do just this. The main issue is that, let's be frank the Record isn't too funny. So what's going to save a lame joke? Beautiful artwork. But if even that is removed, what is left? A sad waste of space. See page 8, 14, and 19 (especially). Lame, ugly stuff.

One chief complaint I have is the cover. I feel like we're supposed to automatically love it just because it's painted, but really, it's the colors that are blinding us. Why not have top notch lines with top notch colors? It is not illegal to have a penciler, and inker, and a colorist be three or more different people, believe it or not. I even teamed with a colorist for my cover last year and it came out great! Why couldn't we have gotten a more refined penciler with these excellent colors? This cover could have been excellent, but as is, it's just good. And it feels waaaay too close to a Lampoon cover. I loathe the Lampoon's ugly paintings; we can easily beat them by doing what they don't: mix excellent lines with excellent colors. But instead we get a needlessly sketchy base clogging beautiful colors.

In a related note, I find I'm not satisfied with the work I do for the Record, both in my quality, but also in the content itself. Thankfully there's the Penny Dreadful, new issue coming soon.

And in an unrelated note, I was grazed on the butt twice today...what's up with that? The first time was by the son of someone famous! Hahaha! I don't know if I want to use this for a comic...it's so incredibly tempting, man.

[UPDATE: THREE TIMES!! I was in Commons and this guy swiped passed me. Yeah, they've all been dudes, actually...Oh gosh, I don't need this.]

Swing Space: great to visit, hate to live there.

Fun Facts: Swing is my favorite place to scan, and was incredibly convenient last year. Also, I almost made Morse the punchline, but darn that Brian Williams for making people and me flock over there yesterday. 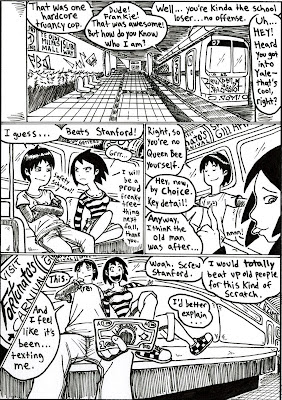 Fun Facts: This mall subway scene is based on photos and memories from Japan, including the Marunouchi Line homage. These 5 panels ended up taking just as long as any other page...! 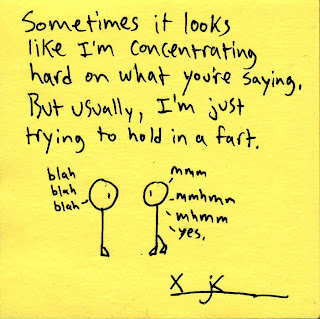 "This town deserves a better class of criminal, and I'm gonna give it to 'em." --The Joker
Here it is, my YDN comics section debut. The series is called Zero Like Me and it'll run Tuesdays. These are our two main characters, Zero and Nyao.

Fun Facts: I auditioned these pieces for the job, so it'll get so much better once the exposition's through. I've never felt so nervous and scared about seeing my stuff published as when I saw this printed yesterday.

I'll be frank: I want to rectify the misrepresentation Yale comics have received, since the Herald is largely ignored, sadly. Maybe it won't always rock, but I'll try my hardest to make YDN Comics palatable. Let's see if I don't fail. 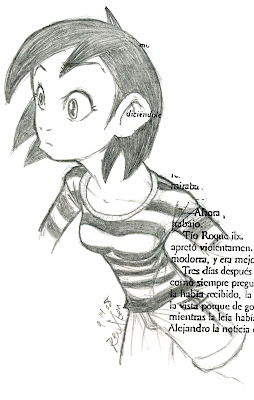 An old drawing of Frankie from Quarters Crisis, from some Spanish reading.

This week is going to be exhausting...I can tell.

[Update: And we're clear--Zero Like Me premieres Tuesday in the YDN! Let's GO!] 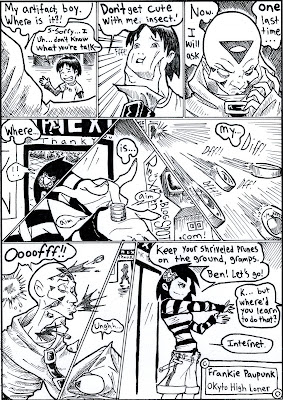 And so begins adventure.

Easter Eggs: Change 6 in the plants.

So that curr, jack kelly, is stirring up all kinds of trouble. He didn't get his first stab at anorexia published, so why did he think "purge," another socially conscious cartoon would fly? 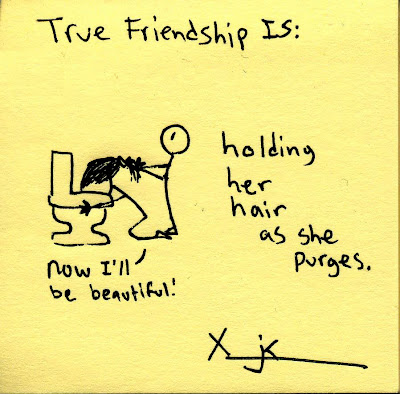 Here's the deal: jack kelly's trying to tap into the insanity of this whole eating disorder issue. He even got an appreciative comment from an actual anorexic person for his efforts last time. Revolutionary, I know, using dark humor to highlight an issue.

Didn't the YDN--and me, actually (printed on the same page, even)--just recently cover the relevancy of eating disorders? Clearly the issue is present at Yale; Master Haller even had to call out a purger last year who forgot to clean up afterward.

I'm usually fine with censorship, but even I think banning the above cartoon is a little much. 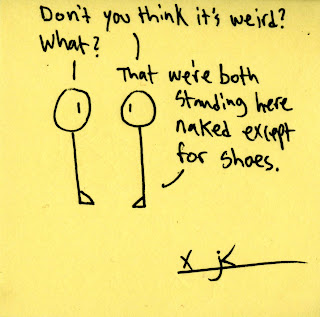 So instead, you get "naked."

I hope this hack gets his way. 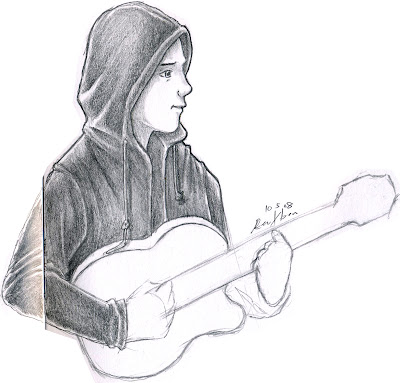 Continuing a veritable Rocktober, Sunday's Yale-A-Palooza yielded an incredible array of talented Yalies. The standout was without a doubt one Richard Miron. He sounds incredible live, like a youthful Death Cab for Cutie, packing a 90s nostalgia because of how closely he sounds like this guy. Everything's alright when he hits the mic.

Unfortunately, I missed most of the festival because I went apple-picking again this year, whose rain date landed right on the festival. I can't say those delicious apple donuts were worth it; I missed a bunch of bands I really wanted to see and sketch. The apples were huge though. 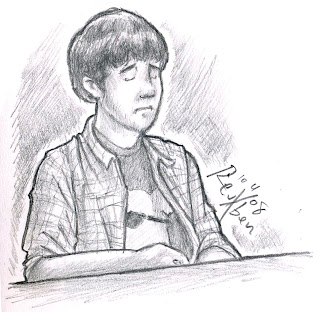 The day prior, I went to JE's Great Awakening and eagerly scarfed my kabobs and Klondike bar so I could sketch. This is the lead singer of Great Caesar and the Go Getters. Unfortunately it was only him and the saxophonist, but it was still a fine show.

The Sandy Gill Affair followed, but fell victim to its common curse: bad audio. The lead singer couldn't be heard, his accompanying vocalist blared, and none blasted louder than the piano. I really wish they had checked their sound better. Problems with audio killed them at Battle of the Bands last year, and allowed a mistake like the Laura Z. band to win.

You could be the greatest band on campus, but if no one can hear you, that's it. 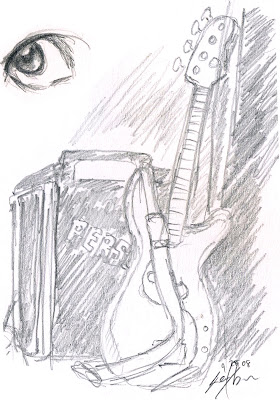 There's been a ton of rock recently, which means rock sketches.

To start, a couple Sundays ago,
Person L
Hit the Lights
Chiodos
and
MOTION CITY SOUNDTRACK
came to local club Toad's Place. I tore the shrinkwrap off of my new My Chemical Romance sketchbook, and this is the best I could muster in the murky mosh pit. This was my first time at Toad's, and the first thing I thought was: MAN this floor is sticky! 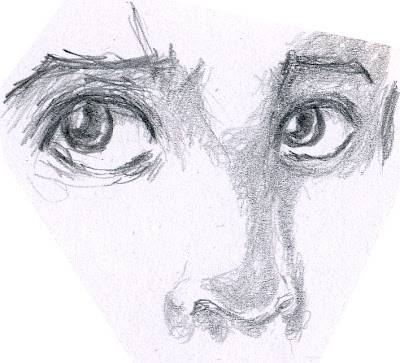 It was a great show all around. I'd never heard of the first band, only vaguely the second two, and was right at home with the headliner. But I couldn't recognize lead singer Justin Pierre, though! His hair was outrageous...ly kinda normal.

Anyway, each band put on an incredible live show, especially Hit the Lights, and I have acquired a taste for Chiodos, which sounds like what Pierce the Veil had hitherto owned in my ears.

So is that it? 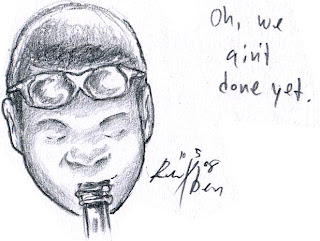 No. So much more rock to come Wednesday as Yale-A-Palooza and JE's Great Awakening yield more rock-centric art, including this incredible jazz trio, above. I wish I had caught the band's name. Anyway, these guys rocked. And they are Yalies. So, ten kinds of insanity there. 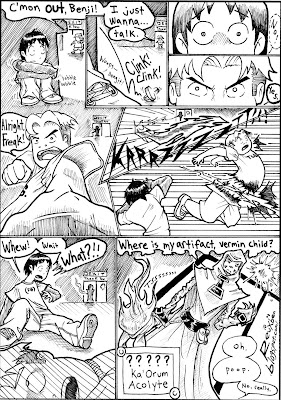 Now we get to the good stuff!!

Fun Facts: I created Quarters Crisis after being confused by Japanese TV, but rather than have suited villains, I thought secret society. Eisner inspired the shared panels. Also, I closed pencils at a record 12:30am! I don't know if I'm getting faster or what, but that's amazing for me. 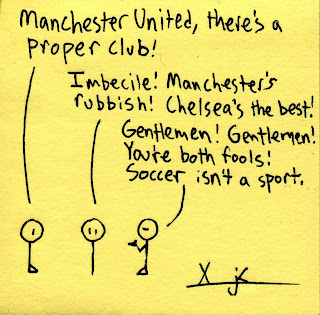 My hatred for jack kelly is only eclipsed by my hatred of agreeing with him. 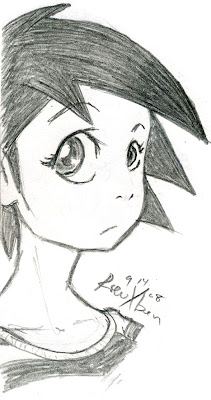 A Spanish homework sketch of Frankie from Quarters Crisis; she's only two weeks away!

In other news: I've finally broken into the YDN! I was blown away first just to see my artwork so huge on a page and then secondly, to see how perfectly it tied in with the article it shared space with. I don't know if that was planned, as this comic's been floating around for weeks now, but in any case, it was excellently juxtaposed. Seeing my name all huge wasn't too bad either. 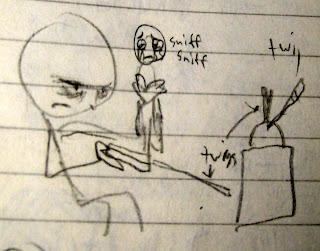 This is the sketch that lead to this. I've been in print at the Herald for over a year, but seeing my stuff in the YDN gave me that giddiness I haven't felt in a long while.

Again, this opinion series, Sick Little Suicide, will aim for every other Wednesday.

On top of the world,