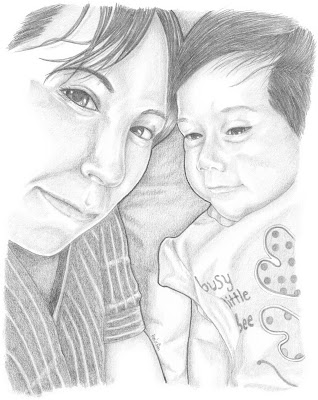 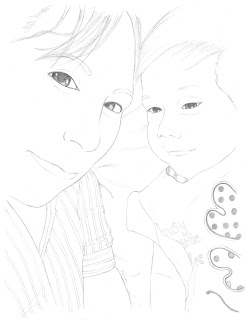 Keep your pants on, Nyao. 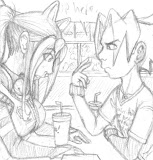 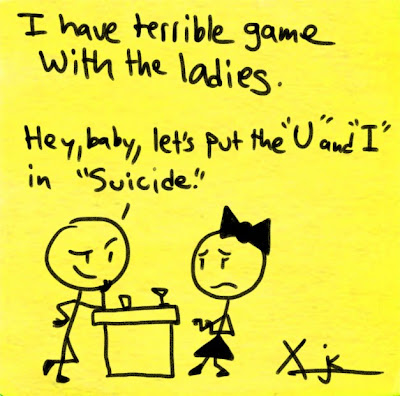 note to self #12: "the crying game"
note to self by jack kelly returns to Removal, like the incurable disease it is. Didn't you get the memo, jack kelly, you insensitive tool, jokes about suicide are NOT COOL. Stop pouting and saying that anyone who kills themselves simply gave up and deserves no sympathy when others fully take on life's suffering every day and learn to deal with it. No, suicide is not a luxury of the rich and lazy, you jerk, how can you say such a thing?! jack kelly, just shut your mouth and draw some more comics. 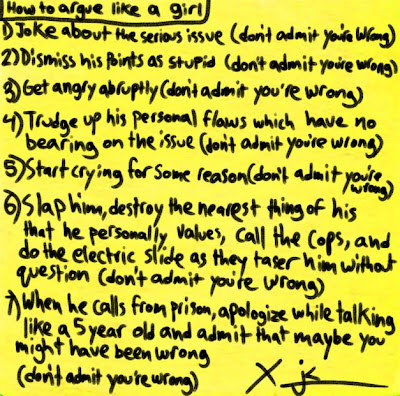 note to self #10: "how to argue like a girl"
jack kelly, you gender-biased pig! How dare you assert that an argumentative double standard exists for women! Why, just for that, if I were a chick, I'd slap you right now, splash a drink in your face, and then have the bouncer throw you out for being disorderly. 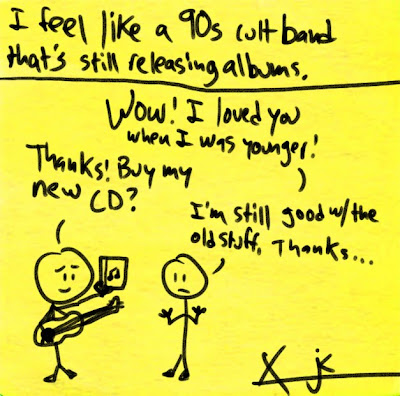 note to self #9: "cult without the e"
That's more like it, you washed-up has-been. Does it burn? Good. Just keep on dancing, like the urine-soaked, valueless little monkey you are, and just hope that somebody throws a coin in your hat, if only out of pity for the shriveled wretch they see before them. 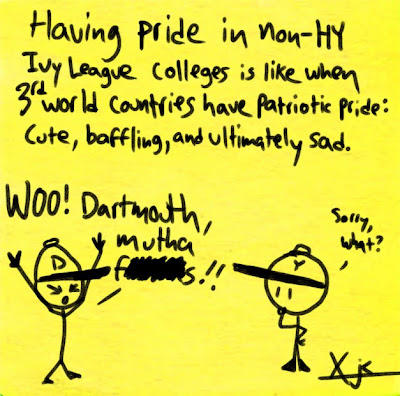 note to self #11: "third world ivy"
I hope you realize that is an insult to third world countries, you idiot. The last thing we need is hate mail from Ethiopia. 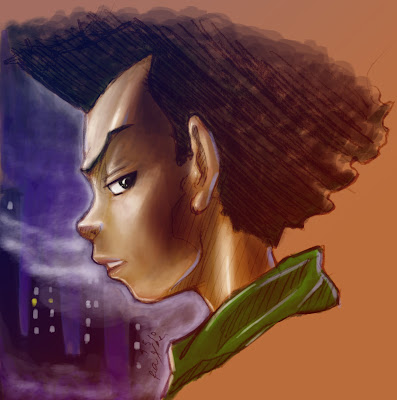 Who's bustin' out those rhymes? 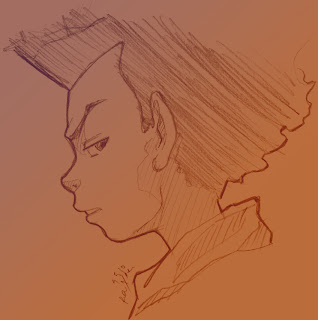 It
should
come
as
no
surprise. 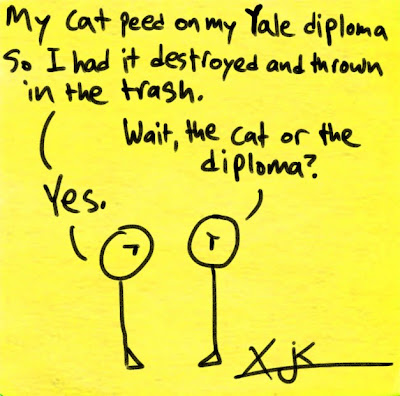 note to self #5: destroy
That rectal thermometer, jack kelly, and his series, "note to self," return to tarnish this website once again. In all honestly, I can't stand that this lowest common denominatoring idiot does better business than me. It's jealously, but justified and not without precedent--I site the case of Giraldo v. Guy. 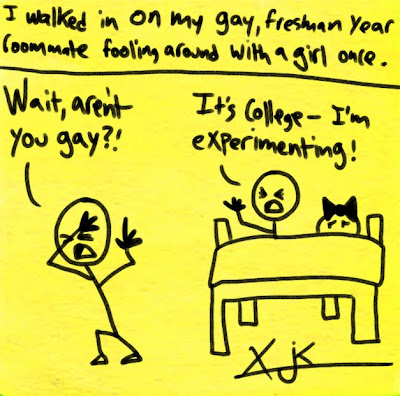 note to self #6: walken
Had to work in a Christopher Walken pun as needlessly as possible, didn't you? Are you proud of yourself, you fame-sucking slug? 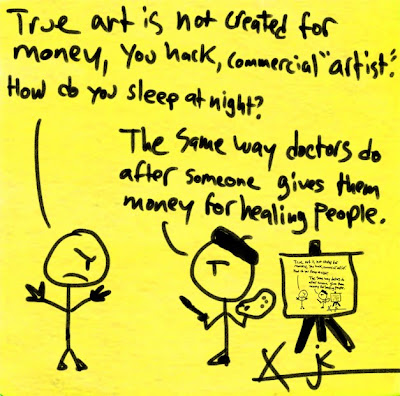 note to self #7: artist
Ooh, you can copy and paste now, aren't you special! Is that some sort of commentary on the increasing legitimacy of art that explicitly builds upon earlier works in this seemingly unending modern age of replication and alteration that insinuates but never actually achieves innovation? Tool bag. 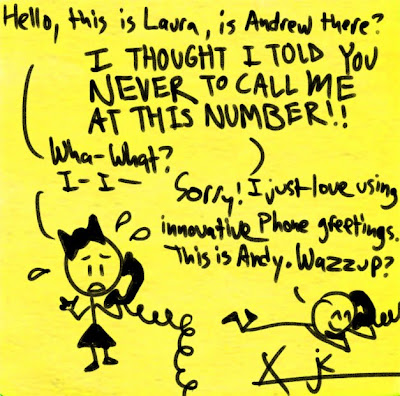 note to self #8: wazzup
Ooh, you can caps lock now, aren't you special! Is that some kind of commentary on...oh, forget it. And stop using peoples' real names, you tacky jerk! Yes, I know every other dude at Yale is named Andrew and every other girl's named Laura, but would it kill you to be a little original for a change?

jack kelly, if you ever ring again...well, this is how it'll shake out.

Email ThisBlogThis!Share to TwitterShare to FacebookShare to Pinterest
Tags: Alive, Fan Art, Garry Trudeau, Making Of, Skull and Bones, Zero Like Me 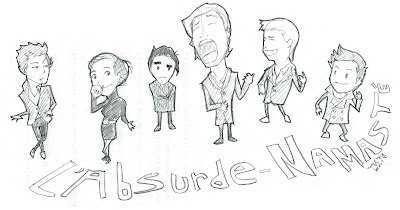 These are some of the remaining shirt designs from that sketch session I did a couple years ago for French band Namaste. They gave me a lot of design freedom, but one specific concept they did ask for was a "cartoony" version of the band.

Since I don't know French, I could only rely on the general mood of the songs and my contact's translation. It's been a while so I can't remember the specifics we discussed, but I believe this design was inspired by his telling me that they contemplate the absurd, like how sand and snow can look so similar meanwhile representing totally different environments... 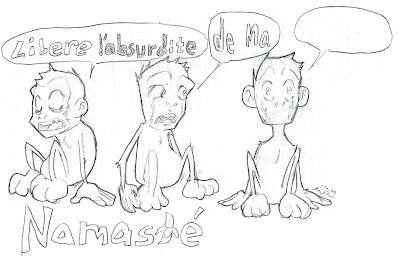 I believe this design came about because they had some sort of Buddhist or Eastern philosophy influences and wanted to do something with that anti-evil monkey trio concept. When I went to Japan, I got to see one of the original monkey trios carved into an ancient Shinto shrine! 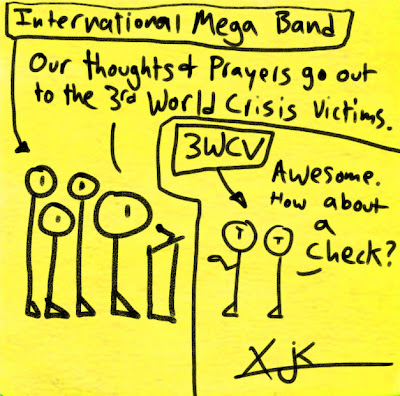 "rock and droll pt.1 - thoughts"
That urine-soaked ignoramus jack kelly has returned...he has demanded that he get his own posts on my website. Like Jay Leno's deathgrip on NBC, jack kelly's got substantial leverage on me such that I cannot afford the repercussions of his firing, so I must cede him space...for now. 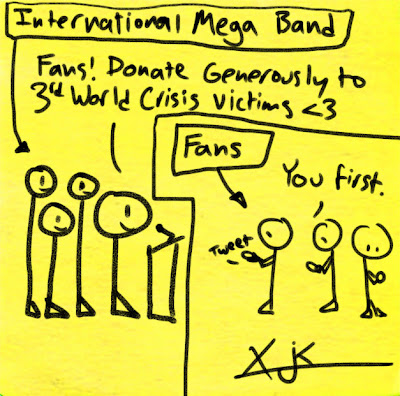 "rock and droll pt.2 - fandango"
So welcome (back) to jack kelly's series "note to self," back from the steaming pile of ashes that were/are the Yale Herald's comics page. If you are unfamiliar with jack kelly, and I hope you are, jack kelly is like the Tyler Perry of post-it-based comics: seemingly everywhere, obscenely prolific, and inexplicably more popular than me. 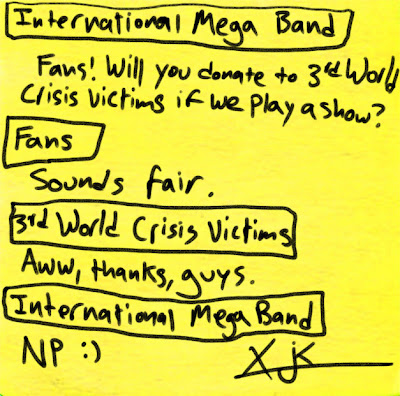 "rock and droll pt.3 - tweet spot"
So he is relaunching here on Removal after his countless post-its tickled the collective fancy and disgust of Yalies with this four-part run of "comics" called "rock and droll," which were inspired after I made the error of opening up to him by sharing my favorite band, My Chemical Romance, with that yellowy stick-disfigured freak. 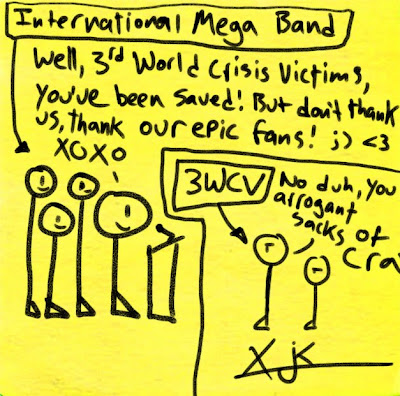 "rock and droll pt.4 - all swell"
So there you go, jack kelly, was it worth it? Did you put your thing down, flip it, and reverse it?

Get out of my sight.

Email ThisBlogThis!Share to TwitterShare to FacebookShare to Pinterest
Tags: Alive, Harvard, Making Of, Skull and Bones, Yale, Zero Like Me 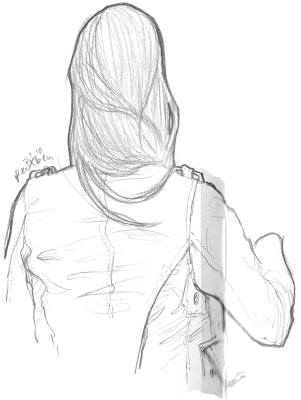 My very last semester at Yale started about 365 days ago. I finally got into a class I had been vying for the past three years, "Literature for Young People." This class had the unfortunate side effect of helping me realize I had indeed chosen one of the girliest majors at Yale--literature.

Even in the brim-packed shopping period sessions of the class (where students may sit in on almost any class to see if they are interested in taking it), I was one of only a handful of males. The final class roster included perhaps three Y chromosomes, one of which decided to drop after the second class. If ever I was in doubt after a couple years of often being one of the only males in a given lichrachur class, I think this was a good sign that dudes don't do Derrida et al.

But in any case, I discovered that apart from her unfortunate and ironically thick, black glasses, one of my classmates was always impeccably dressed, with perfect hair, and the coolest jackets you've ever seen in your life. As I often ended up sketching classmates while my professors expounded upon anything past the first couple of pages of the assigned reading, I managed to sketch her incredible jacket one day.

Towards the end of the semester, the professor had us do group presentations, so I joined the only group I could, Ms. Z's singing group. I told them that I could never hope to match their singing talent--the cleverly-dressed girl's singing voice was so great, it was almost unfair!--so we decided that I would draw illustrations to animate the Huck Finn song we were writing. By projecting my drawings on the wall (there were some additional in-between drawings I've excluded here), I made a rudimentary animation! I knew I had to simplify my art style, so I studied Jinjin's comicsing style for inspiration.

Anyway, her singing was incredible, as was our ringleader's, so my inferiority complex was screaming sweet nothings to me about razorblades, wrists, and what magic they make. And one day a side conversation developed somehow where she told us she almost got a part in an upcoming Disney animated movie about some kind of ice princess--she made it past a couple interviews and even got to record her princess's song in a Disney booth! 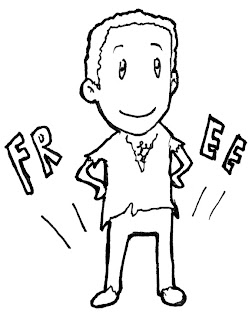 I learned that not only is the snappy dresser legitimately and extremely talented, but that I also saw her dad at a Master's Tea a couple years prior (his casually comedic abilities are incredible)! For her final project, she showed the class footage of her maybe 5-year-old self telling ramblingly random stories to her mom. She told us she always wanted to be an actress. And now she's breaking out on HBO! Imagine that!

Chuck the haters, she deserves all good things she gets because she's got the talent to back up anything familial connections grant her. Her abilities are indisputable.

But I've said too much already. 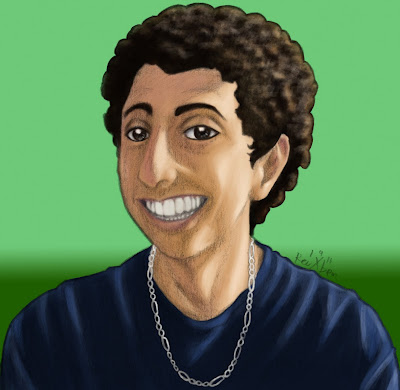 I've reactivated my Fiverr gig, but on an extremely restricted basis. I got swamped with orders last year and had to focus on college, so I suspended my gig. The current plan is to handle gigs in small increments, suspending my gig here and there for more manageable workloads, while working off of the waitlist that I've had since last year.

STATUS:
[Jun '11] Still booked with and focusing on private work,
Going to be tough to do Fiverr draws, but we'll see!
My Fiverr waitlist is long--the wait will be months and months--but I'll contact those users a few at a time until I clear everyone. Private commissions are my primary concern, so they cut straight to the top of my list, and since I work more closely with those clients, they will make the Fiverr wait longer.

To reserve a Fiverr waitlist spot, please send me a Fiverr-mail with "ARCHIVE [your Fiverr name]" in the subject heading and I will add you on. Feel free to describe what you want in your simple, little drawing, as I will place more interesting assignments above boring ones for sure. 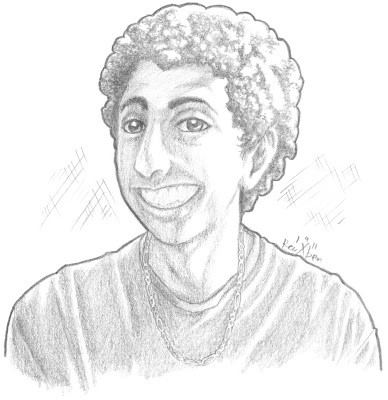 Please see this post for a gig FAQ, which details the scope of the gig. If you want anything outside the scope of the gig or you don't want to wait on the waitlist, feel free to commission me to handle it immediately. Those commissions are my first priority, and the wait will be perhaps a weekend or two, depending on what you want and how my schedule looks.

Thanks for your interest, support, and patience. Have a this kind of day. 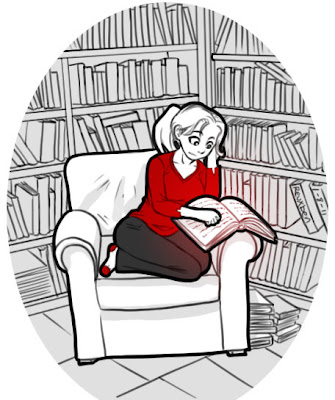 I decided to reboot my Fiverr gig after some 10 months away, starting with a very special assignment I was eager to get to since March of last year. 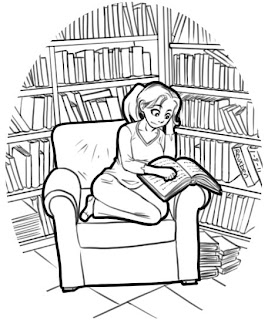 It was an assignment from a Stanford student! I've always had a spot in my heart for Stanford, so I was eager to finally get to this and even throw in some free colors and tones, especially because it was not yet another retrato request, which gets boring.

Most of the stuff on my wall is Yale-related, but I still have the new-admit stuff Stanford sent me over four years ago hanging up, too. I bleed blue and white, but I bruise Cardinal.

Did that make any sense?

Email ThisBlogThis!Share to TwitterShare to FacebookShare to Pinterest
Tags: Alive, Harvard, Making Of, The Game, Yale, YDN, Zero Like Me 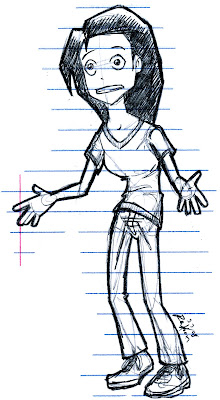 But Fridays
are about
to get a lot more
black. 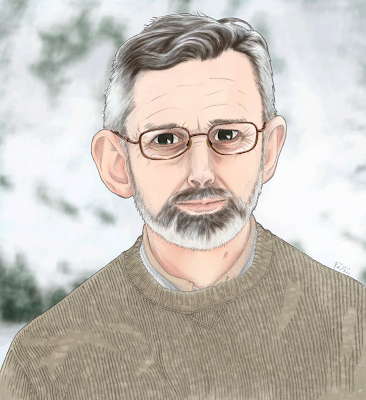 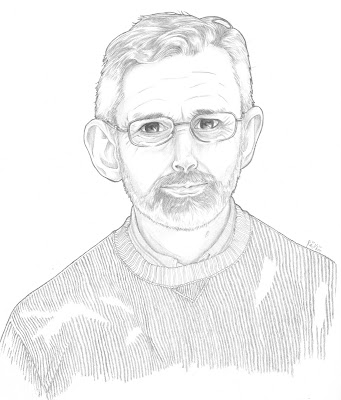 All the cool kids are doing it.

Rusty door hinges help ensure that Harvard is literally hard to get into. 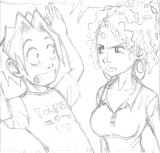